So by popular demand, I've decided to break down the last post to two separate posts.

Now let's talk about the mask that is known as a "leyak". It is a very interesting folklore story in the Balinese history. But to the Hindus, it is a serious thing. Black magic and witchcraft is heavily accepted and practiced. Everyone that I spoke to about this leyak, believe that it is real. They keep telling me that it exists. Instead of me trying to explain the history of this scary supernatural being, I thought it would be easier to quote the history from another source. 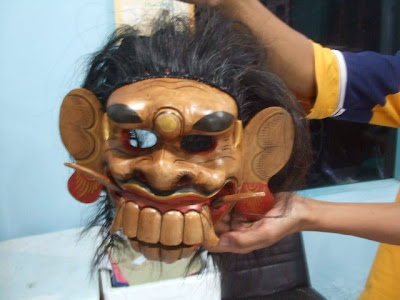 Here is a quote from this link, http://en.wikipedia.org/wiki/Leyak

"In the folklore of Bali, the Leyak (in Indonesian, people called it 'Leak' (le-ak)—the Y is not written or spoken) is a mythological figure in the form of flying head with entrails (heart, lung, liver, etc) still attached. Leyak is said to fly trying to find a pregnant woman in order to suck her baby's blood or a newborn child.[1] There are three legendary Leyak, two females and one male.

Leyaks are humans who are practicing black magic and have cannibalistic behavior. Their mistress is 'the queen of Leyak', a widow-witch named Rangda, who plays a prominent role in public rituals.[1] Her mask is kept in the village death temple and during her temple festivals, she is paraded. Besides leyaks, demons are said to be the followers of Rangda.

Leyak are said to haunt graveyards, feed on corpses, have power to change themselves into animals, such as pigs, and fly. In normal Leyak form, they are said to have an unusually long tongue and large fangs. In daylight they appear as an ordinary human, but at night their head and entrails break loose from their body and fly. Leyak statues (a head with a very long tongue and sharp fangs) are sometimes hung on a wall for house decoration.

In real life, Balinese people sometimes attribute certain illness or deaths to leyaks.[1] A balian (Balinese traditional healer) will conduct a seance to identify with witchcraft who is responsible for the death. During the seance, the spirit of the dead will directly or indirectly point to his/her attacker. However, vengeance by the victim's relatives or family is usually counseled against, and people are advised to leave any action to the spirits themselves. Hence, the suspicions and fears of the family and relatives are confirmed, but revenge upon the witch is discouraged by the healers". 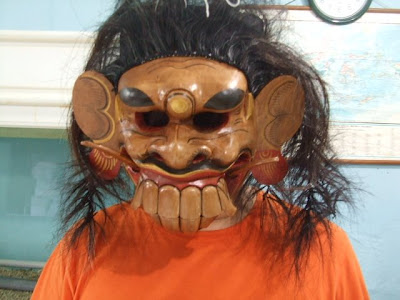 Honey I'm home! I don't feel so good today, I feel like a different person. I think I'm sick, my head feels heavy!

Now let's hear about Rangda, the queen of leyaks!
From http://en.wikipedia.org/wiki/Rangda

"Rangda is the demon queen of the leyaks in Bali, according to traditional Balinese mythology. Terrifying to behold, the child-eating Rangda leads an army of evil witches against the leader of the forces of good - Barong.

It is suggested that Rangda may be derived from the 11th century Javan queen Mahendradatta who was exiled by the king, Dharmodayana, for allegedly practising witchcraft against his second wife. The tale surrounding this is that she proceeded to take her revenge by killing off half the kingdom, which by then belonged to her and Dharmodayana's son Erlangga, with plague before being overcome by a holy man. The name Rangda means "widow".

Rangda is important in Balinese culture, and performances depicting her struggles with Barong or with Erlangga in that tale are popular tourist attractions as well as tradition. She is depicted as a mostly nude old woman, with long and unkempt hair, pendulous breasts, and claws. Her face is traditionally a horrifying fanged and goggle-eyed mask, with a long, protruding tongue.

is a Hindu island, and it is suggested that Rangda may also be associated with Durga, the Hindu mother warrior goddess, and Kali, the black mother goddess of destruction, transformation and protection in Hinduism. While Rangda is seen as fearsome and by many as the personification of evil, she is also nevertheless considered a protective force in certain parts of Bali, much like Kali is seen as a benevolent mother goddess in the Indian states of West Bengal, Assam and Kerala. The colors associated with her - white, black and red - are identical with those associated with Kali. Her iconography is similar to that of both Kali and Chamunda, who are closely related". 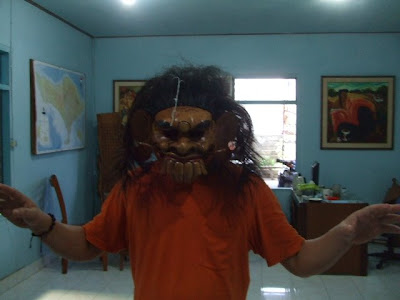 So after I returned home, I had to go around scaring all the crew! Couldn't help it! Too funny!

Now we know Rangda, the queen of leyaks. She would be equivalent to Darth Vader from the Starwars trilogy. When you have forces of evil, there must be forces of good to counteract it. In Starwars, it was Luke Skywalker. In Bali folklore, it is Barong.

Here is his story. http://en.wikipedia.org/wiki/Barong_%28mythology%29

Barong is a character in the mythology of Bali. He is the king of the spirits, leader of the hosts of good, and enemy of Rangda in the mythological traditions of Bali. Banas Pati Rajah is the fourth "brother" or spirit child that accompanies a child throughout life. Banas Pati Rajah is the spirit which animates Barong. A protector spirit, he is often represented by a lion, and traditional performances of his struggles against Rangda are popular parts of Balinese culture.

The lion barong is one of five traditional Barong. In each region of the island has its own protective spirit for its forests and lands. Each Barong for each region is modeled after a different animal. There is a boar, a tiger, a dragon (or serpent) and the traditional lion. The lion is the popular one as it comes from the Gianyar region where Ubud (the home of tourist viewed ritual) is located. Within the calonarong, the dance drama in which the Barong appears, the barong responds to Rangda's use of magic to control and kill her to restore balance. 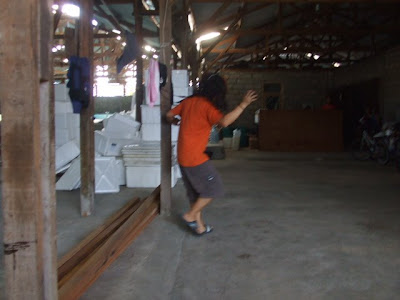 Here I am as a leyak, entertaining our crew! A little dancing never hurt anybody.

And this is the story of how Rangda, the queen of leyaks was killed. http://www.geocities.com/bali_info_4u/rangad_barong.htm

The character of Rangda has its origin in historical facts, now interwoven with fantastic myth. At the beginning of 'the eleventh century a Balinese prince became the king of Java, the great Erlangga. His mother, Mahendradatta, was a Javanese princess who ruled with her Balinese husband, Dharmodayana, until the husband, suspecting her of practising evil magic, exiled her to the forest. When Erlangg:a's father died, leaving Mabendradatta a rangda, a widow, she conspired to use her band of pupils trained in the black arts to destroy Erlangga's kingdom. Professor Stutterheim says that her chief grudge against Erlangga was that be had failed to bring pressure upon his father not to take another wife. Moreover, none of the nobility would marry Rangda's beautiful daughter, Ratna Menggali, out of fear of the old witch, and her caste as a Javanese princess required a noble marriage or none at all. Before Rangda was vanquished by the superior magic of Mpu' Bharada, Erlangga's teacher, she bad killed nearly half of Erlangga's subjects by plagues brought by her leyaks. (According to Stutterheim, the sanctuary of Bukit Dharma near Kutri, gianyar, is the burial place of the famous witch. There is kept a weather-beaten but still beautiful statue of the witch, remembered as the Queen Mahendradatta in the shape of the goddess of death, Durga.)

The following is an extract of the current Balinese version o the story of Rangda (translated from the Kawi by R. Ng. Poerbatjaraka, in De Calon Arang) :

" The old witch rangda Tjalon Arang bad sworn to destroy the happy and prosperous Daha, Erlangga's kingdom, because of fancied insults to her beautiful daughter Ratna Menggali - the noblemen of Daha bad refused her in marriage for fear of her mother's evil reputation. Tjalon Arang went with her pupils to the cemetery and they prayed and danced in honour of Begawati, the deity of black magic, to help them destroy Daha. The goddess appeared and danced with them, granting her permission, warning the witch, however, to preserve the centre of the kingdom untouched. The witches danced at the crossroads and soon people fell ill in great numbers.

"On discovering the cause of the epidemic, Erlangga ordered his soldiers to go and kill the witch. They stole into her house while she slept and stabbed her in the heart', but Tjalon Arang awoke unhurt and consumed the daring soldiers with her own fire. The witch went once more into the cemetery and danced with her pupils, dug out corpses, cutting them to pieces, eating the members, drinking the blood, and wearing their entrails as. necklaces. Begawati appeared again, and joined in the bloody banquet, but warned Tjalon Arang to be careful. The witches danced once more at the crossroads and the dreadful epidemic ravaged the land; the vassals of Erlangga died before they could even bury the corpses they bore to the cemeteries.

" The desperate king sent for Mpu` Bharada, the holy man from Lemah Tulis, the only living being who could vanquish the witch. Mpu' Bharada planned his campaign carefully. He sent Bahula, his young assistant, to ask for the witch's daughter in marriage. Highly flattered, the mother gave her consent and after a happy and passionate honeymoon Bahula learned from his wife the secret of Tjalon Arang's power, the possession of a little magic, book, which he stole and turned over to his master. The holy man copied it and had it returned before the disappearance could be noticed. The book was a manual of righteousness and had to be read backwards. The holy man was then able to. restore life to those victims whose bodies bad not yet decayed. Armed with the new knowledge, be accused the witch of her crimes, but she challenged him by setting. an enormous banyan tree on fire by a single look of her fiery eyes. Bharada foiled the enraged witch by restoring ' the tree, and she turned her fire against the holy man. Unmoved, he killed her with one of her own mantras;' but she died in her monstrous rangda form and, Bharada, to absolve her of her, crimes and enable her to atone for them, revived her, gave her human appearance, and then killed her again."

I hoped you enjoyed the folklore of the leyak, although I have talked to people that say the leyak do come out at night, especially in the remote rice villages!!

Hey Eddie,
Did you ever see the episode of the Brady Bunch when the boys find the Hawaiian idol and it brings bad luck to the clan? You're playing w/ fire bro w/ that Leyak! :)

Yah, I saw that episode. I grew up watching that show! The good thing is that there is no taboo here in Indo like in Hawaii. But who knows, I might just be starting a new legend of horror. A few years from now, kids will be worrying about the "flying head witch" instead of the boogy man!

Btw, that episode is my favorite from the Brady Bunch. My second favorite is "pork chops and applesauce", you know the one!

https://photos.app.goo.gl/41sbREt9XLmuFDXW9. I found this at the goodwill... any connections?