So let's continue on to "coral adventures Makassar". After the corals arrive from the islands, they are sorted and grouped into species. It is always exciting to see what comes in. During this particular trip, I waited for an hour to see the corals. I was told that nice acans were coming in. The following pictures are from my previous trip. 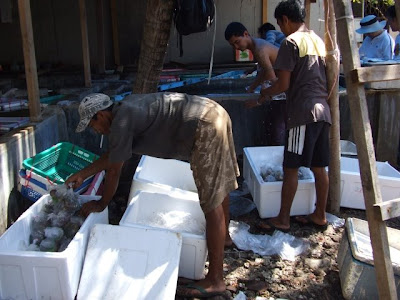 So here are the guys putting away the corals that just arrived from the islands. Note the guy in the right hand corner with the hat is me! 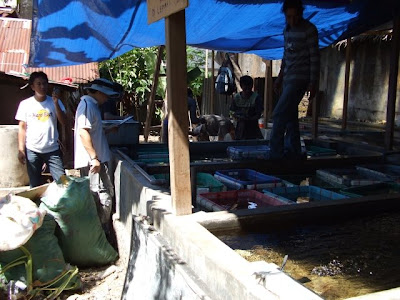 Here is me again, looking over my cites document. Note all the baskets of corals that I selected. 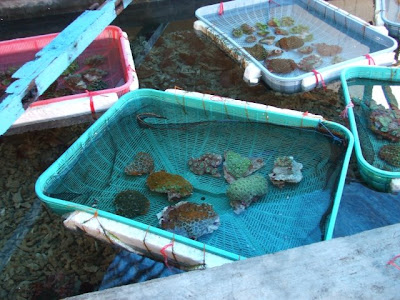 A closer look at the baskets. 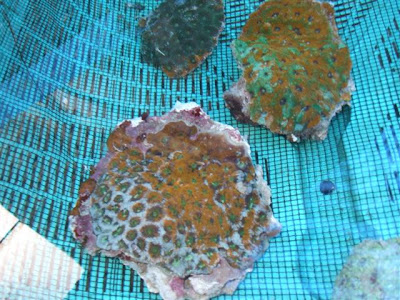 Sure enough, they had nice acans. The best ones are from Sulawessi. You won't find these color morphs anywhere in Indonesia. 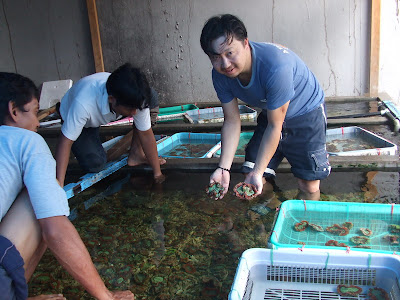 Just so you know, this was what I was doing when I got attacked by mosquitoes that gave me dengue fever a few weeks ago. This is the exact place where I got eaten alive. Even in the water, the skeeters would bite me on my leg where my skin was exposed - crazy! I never seen mosquitoes that aggressive. I picked out the nicest 60 trachys out of 300 in this picture. 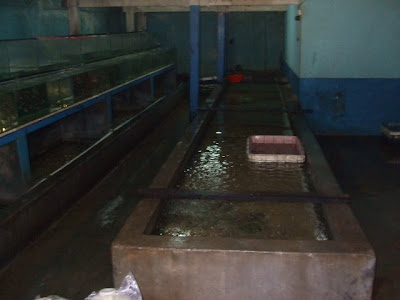 At the suppliers, the systems to hold coral are just simple concrete tanks. Many times, the facility is in their homes. 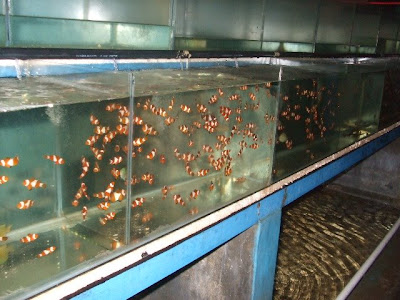 One of few suppliers that deal with fish. The problem is that they are caught with cyanide. This is a big problem with ornamental fish in this area (actually it is a problem all over Indo). I have been talking to Nur, my friend and translator who works for the forestry, to try to find ways to educate the fishermen. The use of cyanide is not just a concern for the aquarium fish trade. One of the big problems is the demand for live food fish in Asian countries like Hong Kong and Taiwan. Huge amounts of live groupers are exported to these countries all the time. Of course the most valuable prized fish is the napoleon wrasse, and cyanide is used to catch these fish and groupers. It is illegal to use drugs to catch fish, but trying to tell the fishermen otherwise is difficult. The only good thing is that the napoleon wrasse is cites controlled. Nur actually inspects the live fish exporters to make sure this fish is under regulation size and quota before being sent. 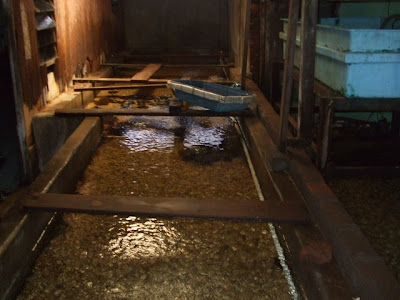 Some of the facilities are really delapidated, but they can hold some real treasures! 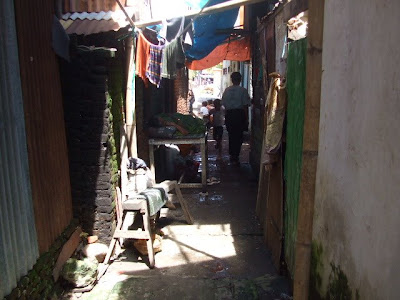 There are two suppliers in this small alley way. Again small houses that have been converted. 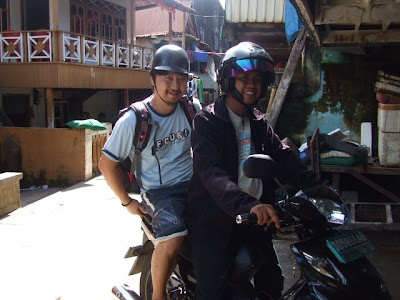 And this is how we get around most of the time. I look pretty funny with the helmet though.

Now for coral pictures. These are corals that I found on this trip. 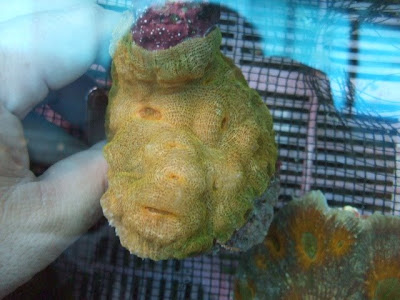 I always find unique or rare pieces, but this one is by far the most interesting coral on this trip. It is an echinophyllia chalice that looks just like a baboon! I call it baboon chalice. It is orange and green with orange eyes. 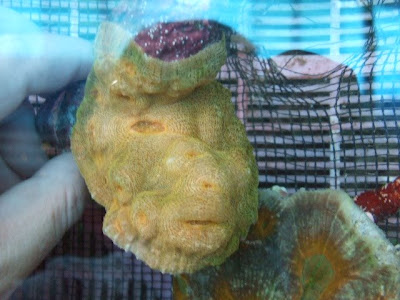 Another angle. It looks like it is giving the evil eye! 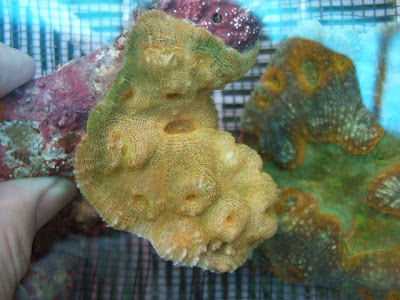 Side view, and still looking like a monkey. Can you guess the coral in the background? I'll give you a clue, it is an acanthastrea species. We will go over this super rare piece tomorrow. 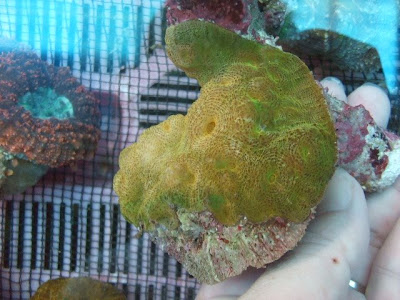 The other side view. It looks like this monkey is wearing a helmet. 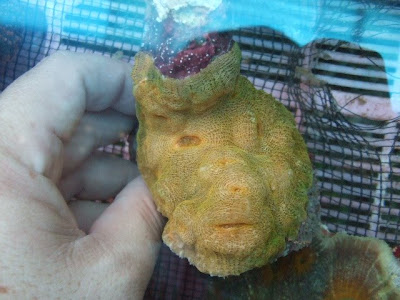 Can you imagine this thing looking back at you from your aquarium? Definitely a conversational piece. Just too cool! 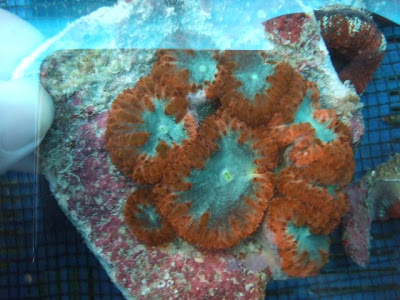 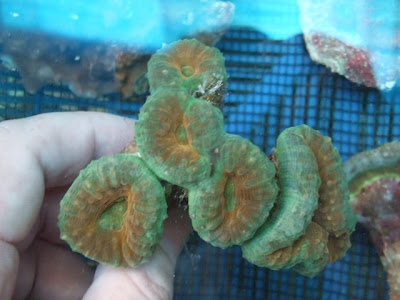 Check out this cool branching lobophyllia! The colors orange and green make it look like a caulastrea. Definitely not a typical lobo. 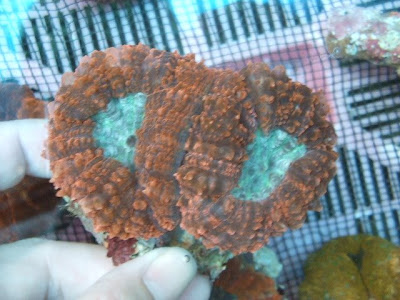 Branching twin lobophyllia. The red on this is unbelievable. You can't tell from the picture, but is metallic in color. 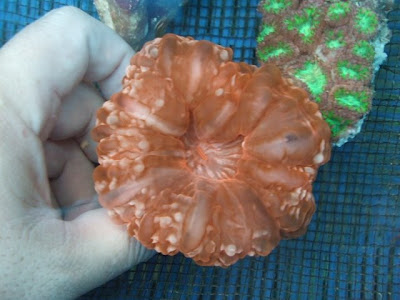 Translucent orange cynarina lacrymalis with a bright green blasto in the background. 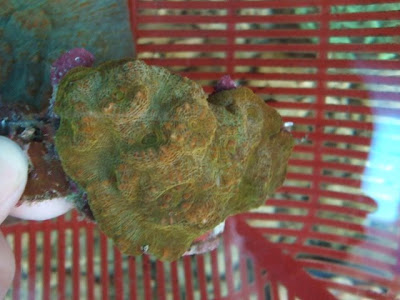 Orange green chalice. A small piece but definitely has potential. I can tell that it was at one point, very metallic. I think it has been sitting at the supplier for a while. No problem for us, as chalice type of corals are very easy to color up. This one is also an echinophyllia species. 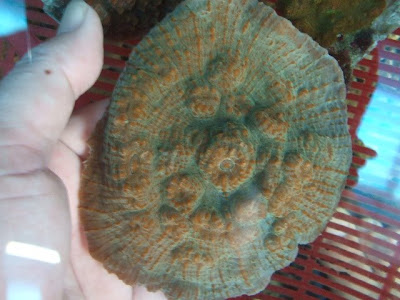 Ok, so this piece has definitely potential. It is green blue with orange - red stripes. Again it has been sitting around for a while and lost some color. The stripes make it exceptional on this chalice. 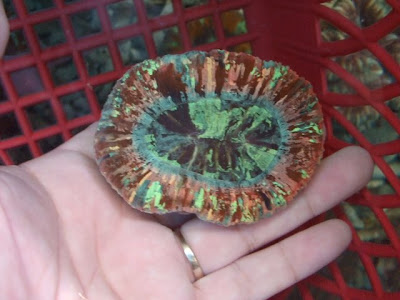 A killer trachyphyllia! I call this open brain, rainbow trachy. 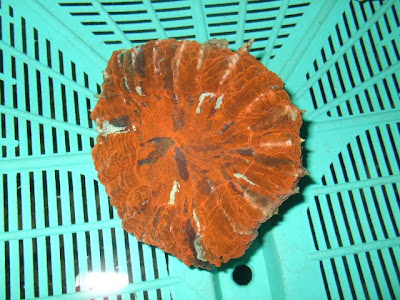 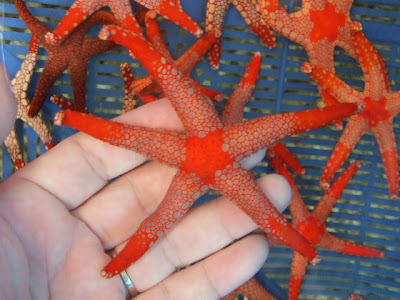 Check these guys out! Fromia and linkia starfish. I used to see these from Sri Lanka back in the TP days. The one I'm holding looks like a linkia, and the ones in the background are fromias. 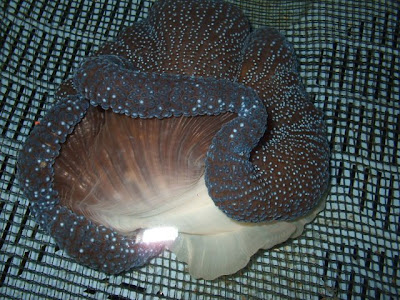 Attention all carpet anemone fans! Can you tell me what species this is? It is not a gigantea or a mertensii, the two typical blue carpets found in Indonesia. I believe we are looking at a very rare blue hadoni! I have never seen a blue morph of this anemone before. The way to id the carpets is to look at the base. We will talk more on these and how to id them at a later thread.