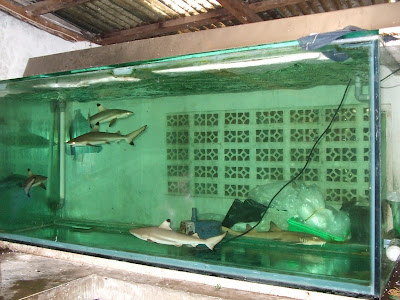 A few of the bigger shops had sharks for sale. Most were blacktips and a few whitetips. This one happened to have a nurse shark too. 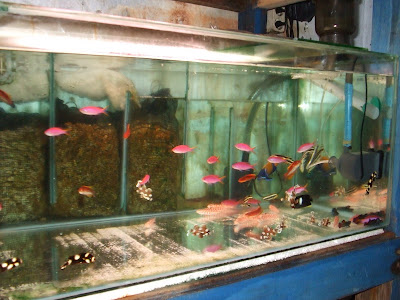 So typically this is how the fish is sold. A variety is housed in medium sized glass tanks. Many are overcrowded but again the retail shops sell a lot of fish out. 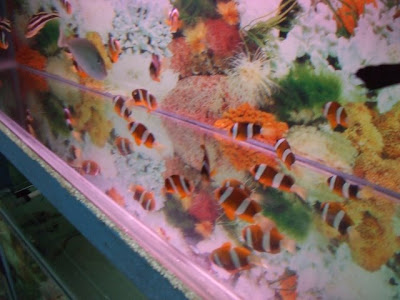 A group of sebae clowns playing in a barren tank. The background and reflection makes the fish more colorful. 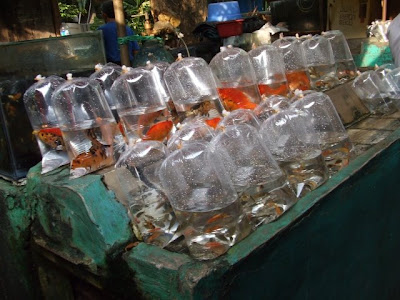 Small kois for sale at one of the sidewalk vendors. Much of the goldfish types are sold in this fashion. 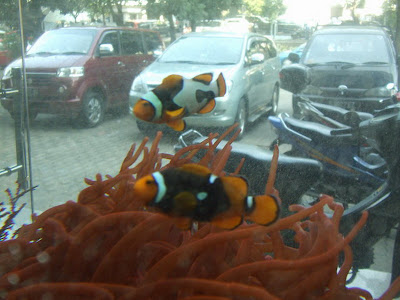 Check out this nice pair of true percula clowns. These morphs are not common. One out of thousands will look like this. These were from Irian Jaya. Note the long tentacle rose anemone that the clowns are hosting in. This particular shop is a specialty retail service shop. They set up aquariums and do service, like I used to do. 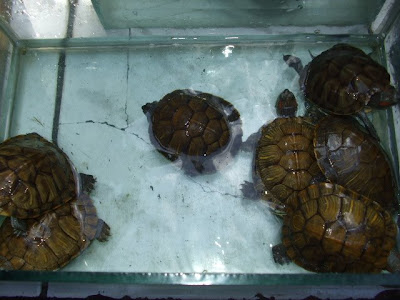 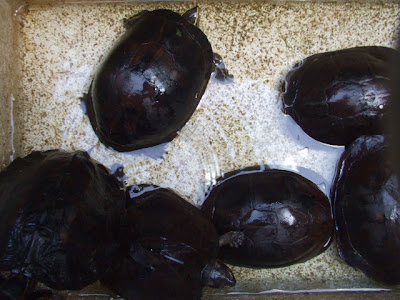 Some strange looking box looking turtles (but not box turtles). 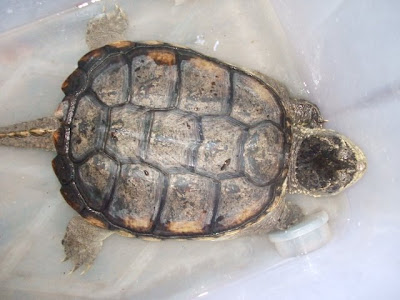 Another unusual freshwater turtle. At first, I thought it was a snapping turtle, but it wasn't. 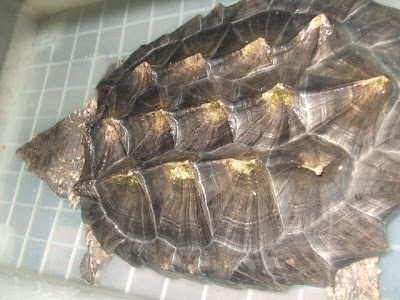 Check out this monster! This is for sure a snapping turtle. 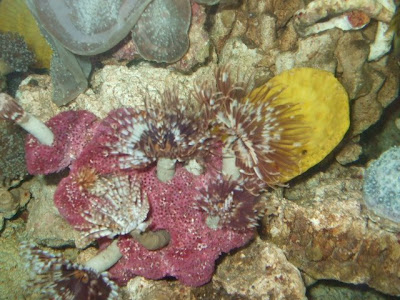 This was kind of creative. This shop drilled holes into a tubipora skeleton and stuck in feather duster worms. Pretty cool! 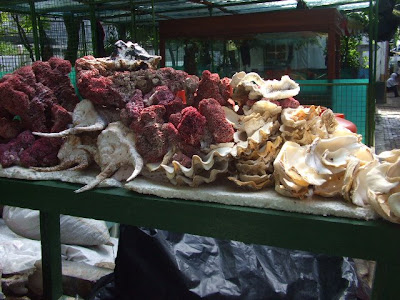 The sidewalk vendors sell all kinds of decorative corals. These are most likely from dead corals from the retail shops. 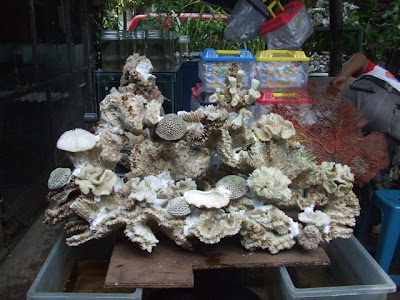 Being clever they are, the folks here glue these dead coral skeletons and make decorations for aquariums. I think this would look nice after a year in a reef tank. 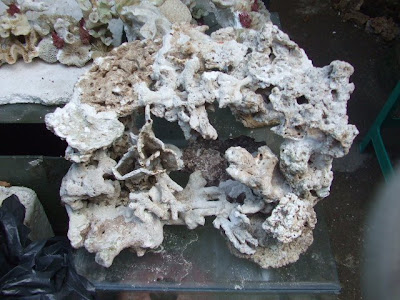 This sculpture was made from bits of liverock rubble. Kind of cool for a nano tank! 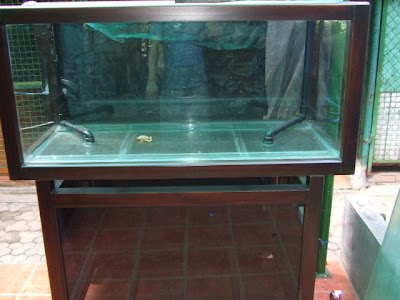 A sample of an aquarium set up for sale. This one is designed for freshwater. 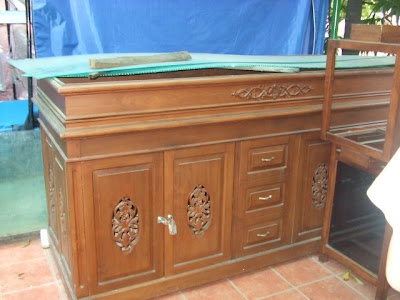 Some of these hand crafted aquarium stands are made from solid teak! I wish I had access to these when I ran my maintenance company. Many of my high end customers had teak flooring. If I had offered such things as matching teak cabinets, man I would've made a killing! One day maybe I can export these to the US. 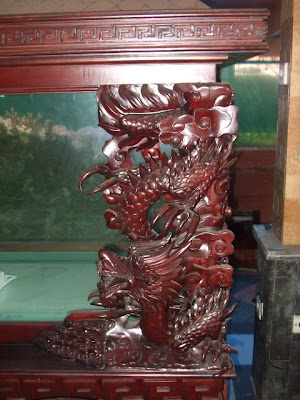 Indonesians are very highly skilled craftsmen. Check out this carving of phoenix and dragon. I think an Asian arowana (dragon fish) would look nice in this tank.

That is it for the LFS's. When I return to Jakarta, I'll make another trip and update you guys on what I find. 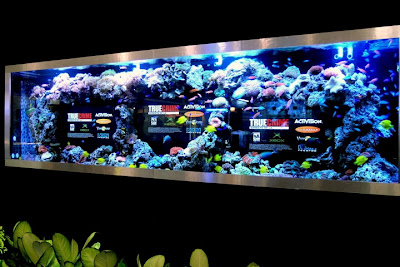 For tomorrow's topic, I will go over this beautiful new concept reef aquarium and the man who designed it and put it together. It stole the show at the 2005 Aquarama in Singapore!

Those clownfish look incredible. One of those decoration shots looks pretty neat, too. Love your blog, man. Keep up the good work.

Hello Eddie!
I've been very lucky to spot your articles on the internet while browsing for fish shops in Jakarta and Surabaya!
My name is Pierre and I'm a 27 years old french animal photographer. I'm webmaster of a message board (in french) on zoos and aquarium and also of a picture gallery (www.photozoo.org) showcasing animals taken in Canadian, Asian and european zoos and aquariums...
Could it be possible that you email me the exact location of the fish-markets in Jakarta as I would like to go there and take some pictures of some unusual fishes and corals?
Also, do you know any good fish market in Surabaya, Singapore and Kuala-Lumpur??
I'm looking forward to get in touch with you as I also have some pictures from european aquariums and fish shops that may interest you...
Here's my email adress : Pedroyayadrums@yahoo.com

I really hope to get an answer from you.
Take care and congratulations for all your amazing work
Best regards

I'll be glad to help you. I just sent you an e-mail.

Such a lovely composition.Beautiful pictures.I have spent a lot of time looking for fish shops in Jakarta and i've been to few places like Negeri Ikan in Pondok Indah and so on.I've never discovered this place.It's unusual and lot's of variety.Can you mail me the exact location of this place.I would love to drop by to this place.

I'll get back to you when I return to Indonesia in early Feb!

After reading your articles, really motivate me to go jakarta.

Can you tell me how to get to this local fish store market? Really interested to pay a visit next month.

Is something like cartimar in manila i visited before. very cool.

The area has a name but I forgot. I'm in the US right now. I'll be returning to Indo next month and I can let you know then. Send me an email at coral.adventures@gmail.com in mid Feb.