Back in Jakarta, my friend's brother was telling me about this "chicken fish" that is famous in Sulawessi. I was told that this fish taste like chicken, although he had never tried it. Since I was taking off to Makassar, I told him that I'll make sure to try the fish when I got there.

So after a hard day of picking coral, it was time to relax and try the famous chicken fish. 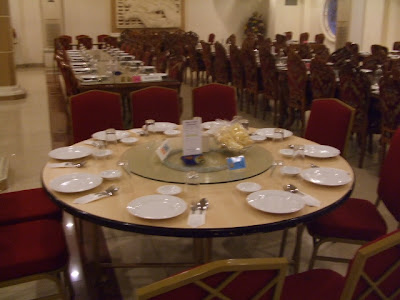 We ended up at this kind of a fancy Chinese restaurant. It served Chinese Indonesian seafood. 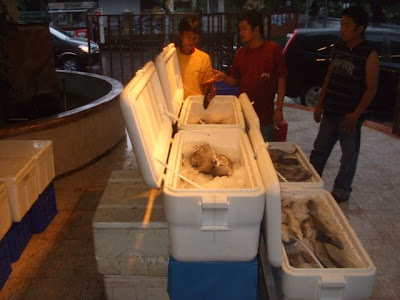 Upon ordering the chicken fish from the menu, the waitress escorted us to the side of the restaurant to pick out the fish we wanted to eat. She opened up these coolers and behold the chicken fish. Holy crap, the chicken fish is a trigger! I couldn't make out what species they were, but I was glad it wasn't a clown trigger (my favorite aquarium fish). 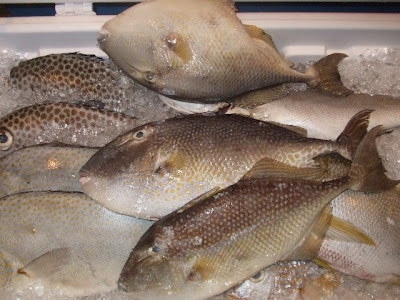 These triggers were large, at least 12 - 14 inches long and weighing at least a couple of pounds. 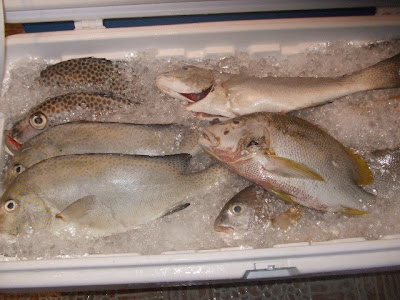 Also in the coolers were assorted snappers. 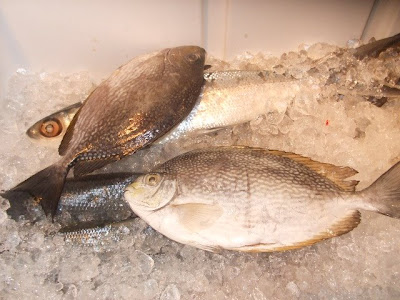 Some strange looking rabbit fish. These and the foxfaces really taste good. I remember first eating them in Tonga. 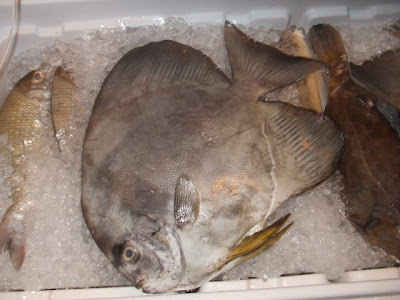 A large batfish. This fish taste just like sanddabs. The meat is soft and delicious. I have to say that tropical species of fish taste much better than their cold water cousins. 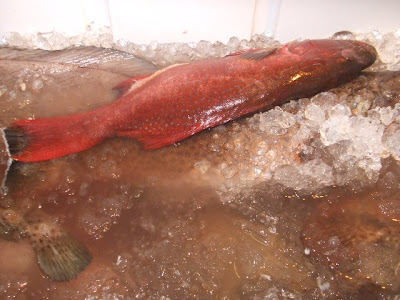 Assorted groupers are also high in demand, especially at the Chinese restaurants. The price is different for different species. For example, a bright red strawberry grouper would cost more than the blue spotted gray grouper. The strawberry actually tastes better! 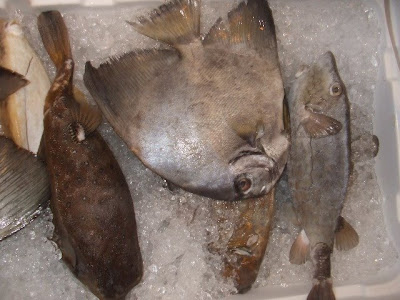 Another batfish with some boxfish. 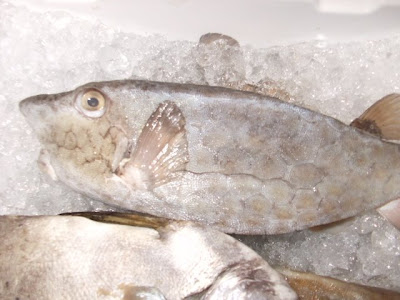 A closer look at the boxfish. I think I'll try it next time around! Check out this huge scat (the fish at the top). This is a brackish water species, although I've seen fishermen catch these off of a pier in Bali in full saltwater. I've been told that this is also a great tasting fish. Tomorrow, I'll let you know how the chicken fish taste.

And now some coral pictures. Unless noted, all of these corals are from this trip. 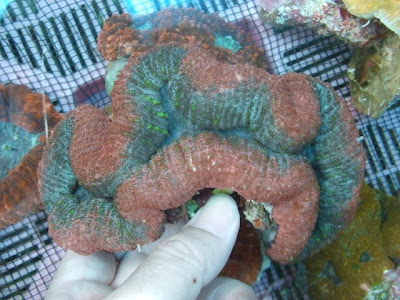 There seems to be an endless color morphs of lobos in Makassar. This one sports green - blue center with pink on the edges. Beautiful! 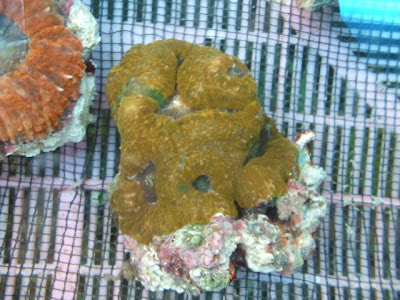 There appears to be two different size morphs of Acanthastrea Echinata in Makassar. This is the one with extra large heads. There's a chance that it is a different acan species, but I can't make it out. I've talked to several experts, and we all agree that it is an echinata species. 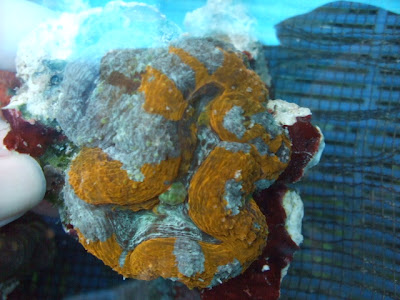 Corals like this can be argued between a lobophyllia or acanthastrea. The large head resembles a lobo, but the smaller heads resemble an acan. It also sports acan colors. In Makassar, this coral is known as "large lobo Eddie", after I created the demand from the suppliers. Each of the suppliers now eagerly searches for these pieces for me. 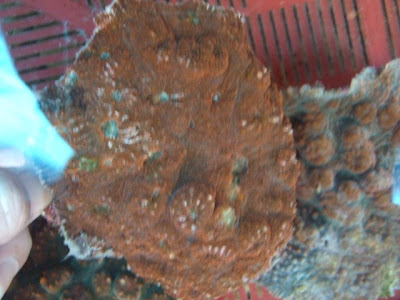 Sorry for the blurred picture but at least you can make out the metallic red color. It is another echinophyllia species that came in from the islands banged up. It is recovering in our Jakarta facility now. 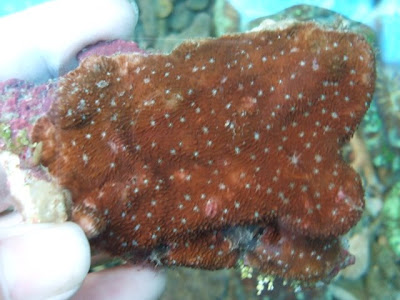 This coral was glowing red, and it was mixed up with red gonioporas. It looks like a litophyllon species. Red morphs of this coral seems to be rare, as the common color is usually cream to green color.

Let's talk about this mystery coral that is only found in Makassar waters. I discovered this coral the first time I went to Makassar. I only found a few pieces and exported them to the US. The fishermen and suppliers were mistaking these as blastos, and logically I found them within batches of the blastos. The Jakarta and Bali exporters were rejecting them as they were too small to sell. These corals usually come in single heads. I asked the suppliers to look for more pieces for me. They contacted the fishermen and soon I was able to get many pieces. Then, other exporters found out about this coral and now the demand is high. The supply is low now, and I can only get a few pieces. I dubbed this coral as "lobo Eddie", and to this day, it is referred as that. The Jakarta guys get really pissed off when the suppliers refer this coral as "lobo Eddie". After I created the demand, the exporters started to market it as micromussa or blastomussa bowerbanki. These guys have no idea what they are talking about. One thing that is for sure is that it is not a scolymia, lobophyllia, or an indophyllia species. However it does look like a scolymia at a glance, but the skeleton structure does not match. I've asked some experts about this coral and all the fingers point to an Acanthastrea Maxima. According to Veron's book of "Corals of the World", this acan species does not exist in Indonesia. However, unless it is a new species, the skeleton structure closely matches that of the acan max. 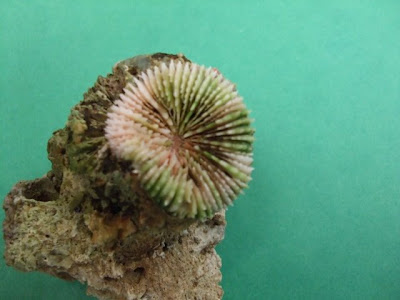 Go check out the picture of the acan max skeleton in Veron's book. Actually, Dr. Veron was here in Bali for the climate change symposium recently. We were supposed to meet up and discuss this coral and other species that I had questions about, but his schedule ended up being too tight and couldn't meet. He said he was sorry and that the next time he comes to Bali, we will meet. By then, I'll have more corals to discuss with him! 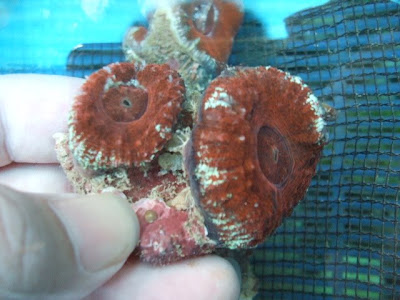 Here is one with three heads. It is bright red with whitish markings on the edges. It does resemble a scolymia species, although most scolys are solitary and have only one head. 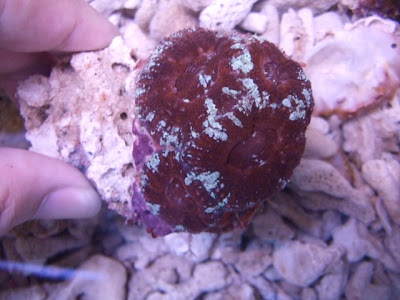 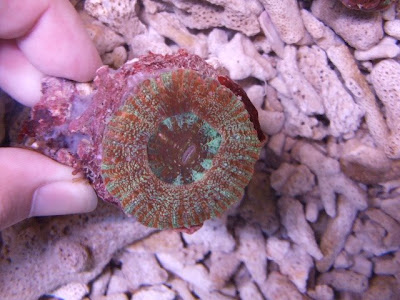 Oh wow! Look at this single head piece. The colors are amazing. I used to think, that this coral only came in brown to red with some stripes. But I keep seeing amazing color morphs. This is a collector's item for sure! 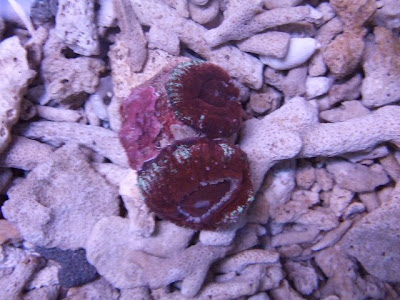 Typical double headed piece. It is really beautiful. You will see some photos of these corals in actual aquariums later on this post. 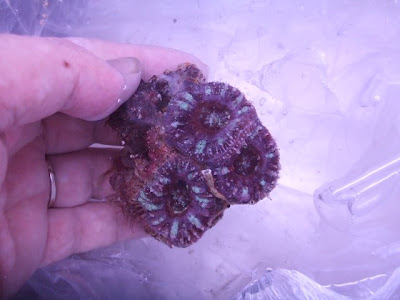 Ok, this is beyond crazy! Not only does this max have three heads, but it is purple in color. To top it off, it has whitish -bluish stripes! I love this piece. 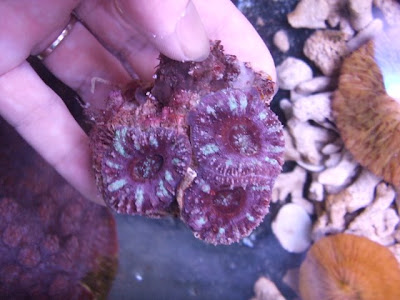 Another shot of this gorgeous little coral. Too bad I don't have a display tank to put in. 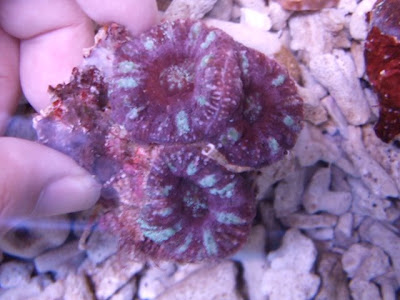 A closer shot. I just can't stop looking at it!! 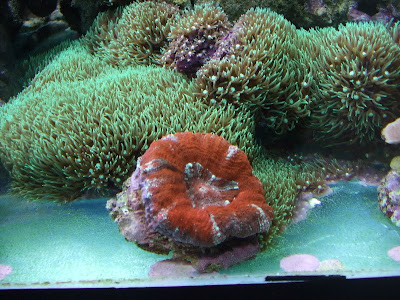 This acan max is in my friend's tank in Makassar. I will do a write up on this tank at the end of this "Makassar, Sulawessi" series. 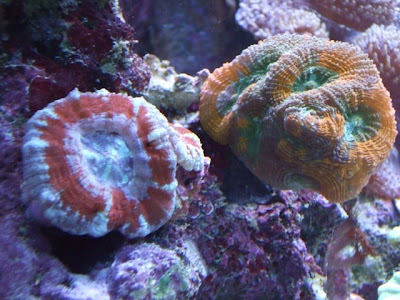 Here is another beautiful color morph of the acan max. I just can't imagine how many different color morphs actually exist. For sure, a collector's piece! 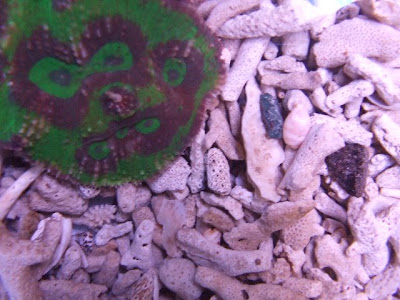 Check out this smiling face coral, two eyes, a nose, and three teeth! Stay tuned and I will discuss this and other amazing corals tomorrow.

Man, I don't remember that. But you are right, it does taste like chicken! You liked the bong, I was thinking about you when I saw it. ha! ha!