Corals and fish for the week!

Hello everyone. I was going to talk about the "tv in the tank" or known as "aqua media" aquarium and it's designer, but I'm still waiting for some pictures. So for today, let's just talk about some corals and fish that we had for this week. 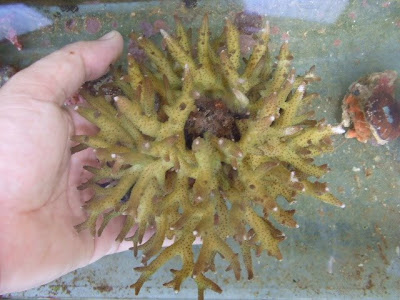 Wild Seriotopora colonies are hard to find. This one is an absolute beauty! It is green and looks like it has green polyps. This one is particularly uncommon, as it was collected in deep water. I can't imagine what it will look like under halides! 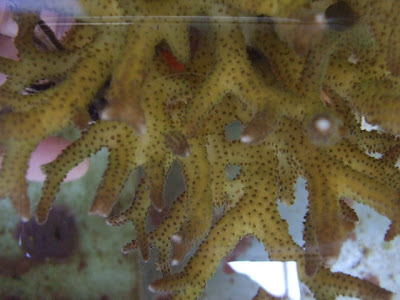 Here is a closeup view of the tips. 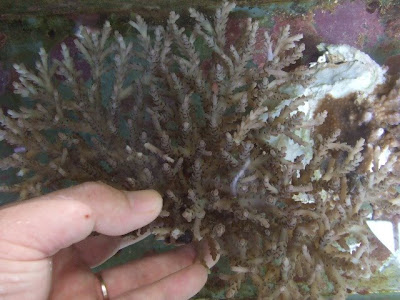 Here is another deepwater sps that is not common. If you guessed acropora selago, you are right! Most of these corals grow in a table form. Can't tell it has color, but I know it does. Again need some 20k's! 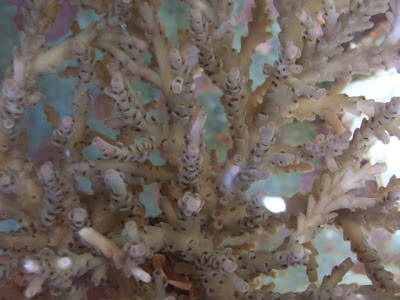 A close up view of the polyps. Too bad they all retracted when I moved it to take a picture. 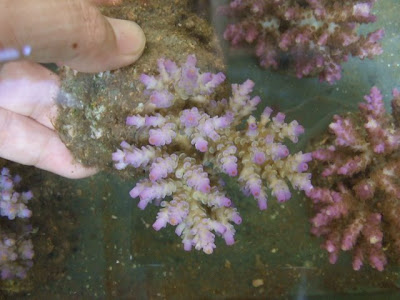 Check out this little baby! Raspberry tipped tenuis. Tenuis seems to have the second most color morphs of the acropora family. Of course the first is acropora millepora. 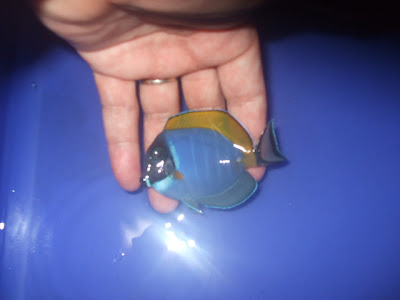 A cute little powder blue tang. These guys come from the west end of Sumatra from a city called Medan. Powder blue tangs only come from the Indian Ocean. They are common in Sri Lanka and Maldives. I suspect that the fishermen go far out of Medan towards these areas to catch this fish. 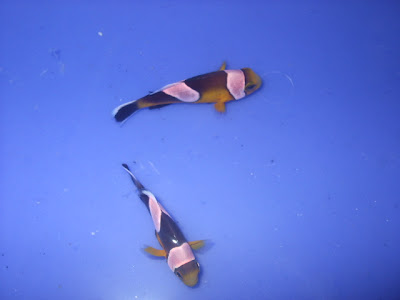 These are saddleback clownfish from Irian Jaya (West Papua). This morph only comes from this area. Note the pinkish color on the white stripes. 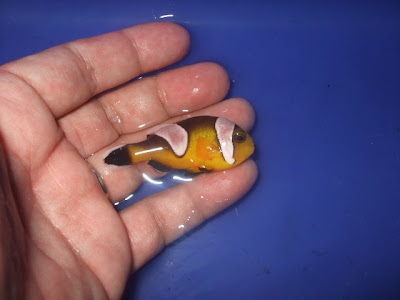 A closer look at the cute little guy. These and the true percula clownfish are about the only fish that is caught for the aquarium trade in Irian Jaya. This is because the freight from Irian is very high. So only high priced little fish can offset the extra cost of shipping. 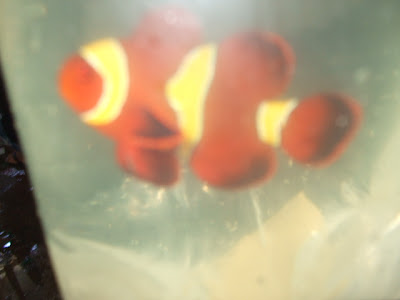 Sorry for the blurry picture. Gold bar maroon clownfish are also from the Medan area. They only come from this area in Indonesia. Like the powder blue tangs, these fish are expensive as the fish has to be air freighted to the exporters. 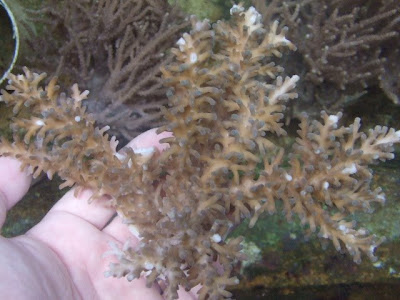 A true echinata. Who is brave enough to try to color this baby up? Like other bottle brush type acros, they are fragile and can get damaged easily, like this one did during shipping. 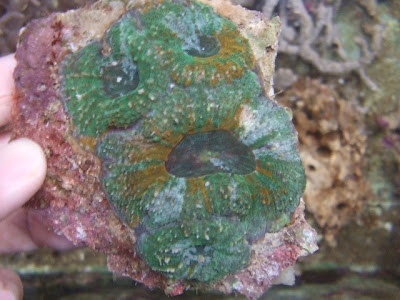 Another one of those rare large headed acan echinatas. This one reminds me of "cookie monster" from Sesame Street! 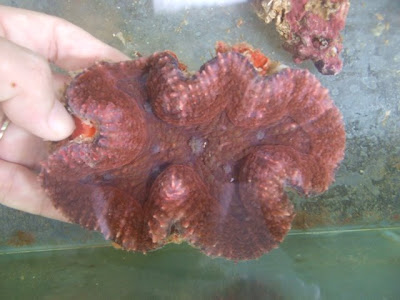 A beautiful dark purple deepwater lobophyllia. I haven't seen this color morph before! 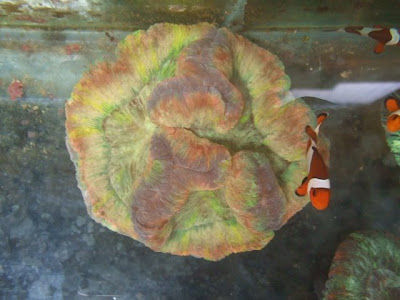 The Bali brain (trachyphyllia). This one seems a little bleached, but morphs like this can stay like this forever and still be healthy! A very popular coral among the Japanese hobbyists. 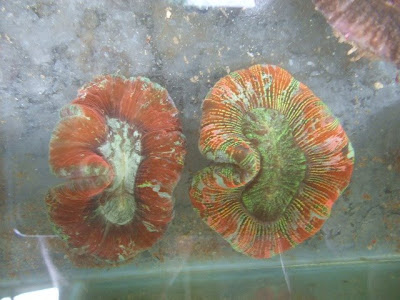 Some super nice little trachys. The one on the right is truly crazy looking. These have a conical base that is less pointed than other trachys. Most likely, the base would turn flat as the coral grows. Then it will be known as a Bali brain. 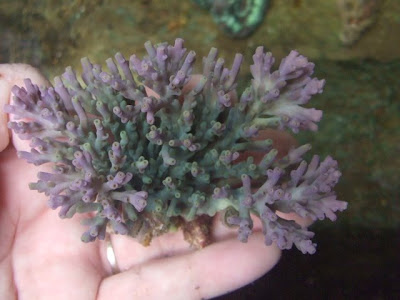 Can you guess this little gem? This is an immaculate little colony of an acropora carduus! All the ones I've seen before have been brown. This one is a super exception. Just a beauty! 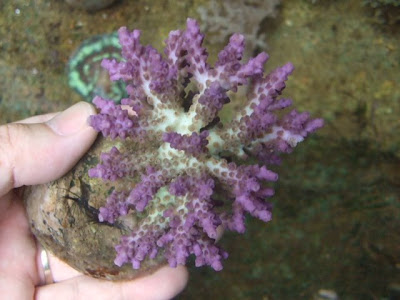 So this little bright guy has the colors of acropora plana. But I think it is a different species. The growth pattern is different and more so is the polyps. You can't tell from the picture, but before I moved it, all the polyps were fully opened and it dead on looked like the "purple bonsai". Check out how bright the coral is. Can you imagine under some halides? 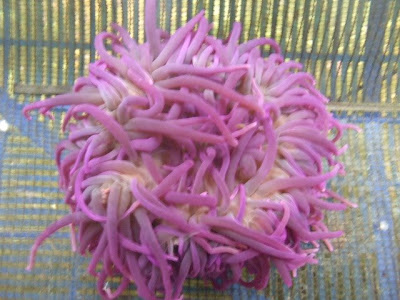 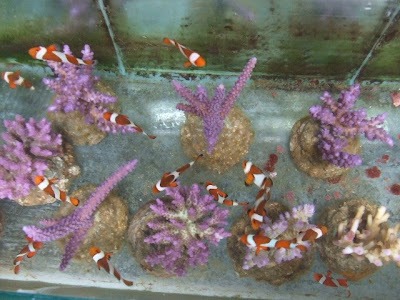 This week, over 1300 common clownfish were brought in. Here are some playing around some aquacultures. 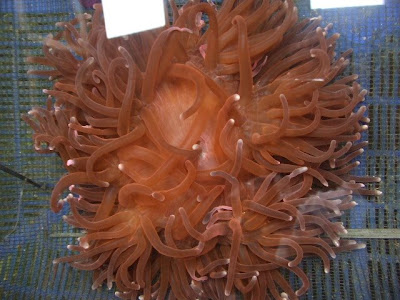 Another Macrodactyla doreensis. This one happens to be pink / red. Under some good lights, the colors look metallic. These only comes from Sulawessi, as far as I know. 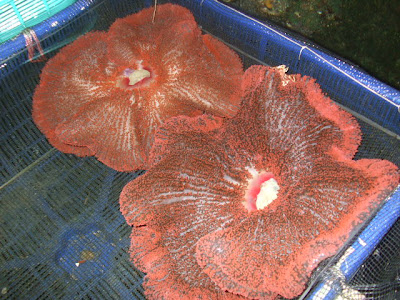 Some gorgeous red carpets. These are Stichodactyla giganteas. The hadonis also come in reds too, but are more rare. I'm on the lookout for a red mertens for a friend. I don't even know if they exist! I will do a post on these and other anemones later on another thread. 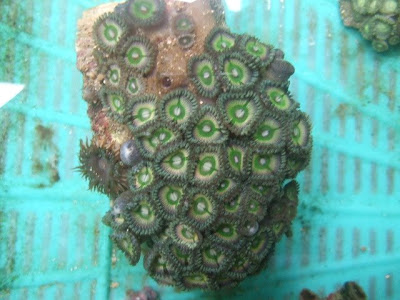 Check out these unusual palythoas. Someone is going to sell these for at least $20 a polyp! Nice! 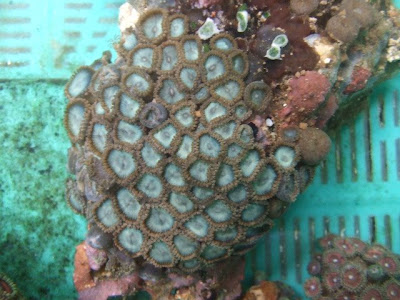 Some sky blue palys. Sometimes we get lucky and get the same piece but dark blue!

I hoped you enjoyed some of our stocked corals. Some of the pieces already have been exported. "Tune in" (get it, tune in as in tv in the aquarium) tomorrow for the story of "aqua media" aquarium.

Yah the clownfish from Irian Jaya (West Papua), are very nice. This area is in the middle of the "coral triangle". They probably have corals that are also endemic to the area as well.