Hello everyone. Sorry for the broken English on the last post. I had called my guy Tori in Bali to write something on this blog to update the situation. I didn't want fellow reefers to think that I caught the bird flu or something and ended up in the hospital again. I was in East Java getting corals.

Again this week has been hectic! I will go over all of my activities for the past week tomorrow. From corals being stolen to my computer getting a virus, I've had better days. It is now about 3:00 in the morning in Jakarta and I'm exhausted from preparing and sending a shipment to the US. So today's topic will be short to the point, so I can get some sleep!

I found this beautiful coral on this week's trip to Northern Bali. The supplier was the same but the corals were from a different area. But I didn't expect to find such a beautiful acropora. At first glance, it looks similar to an acropora grandis. But upon examining the other pieces, it looks more like a gomezi. There were two different growth patterns on this acropora. One growth form looks like a nobilis or a formosa stag type with large coralites. The other growth pattern is similar to a gomezi (tort). I have never seen this coral before. It was glowing sky blue with raspberry high lites in the water - incredible! 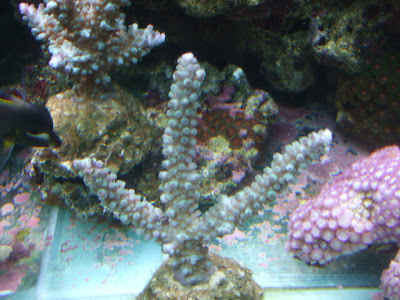 I picked up twelve pieces of this extra ordinary acropora from Northern Bali. That night, I took with me two pieces for my friend Onky in Makassar, Sulawessi. As I mentioned before, he has a very nice sps tank. The two pieces were put on the bottom of the aquarium. Oh man it looked good! Fresh off the ocean, right into the aquarium. I never gave the coral a chance to brown out. Under a good system, this acro should turn metallic sky blue. I will monitor the two pieces every time I go to Makassar! 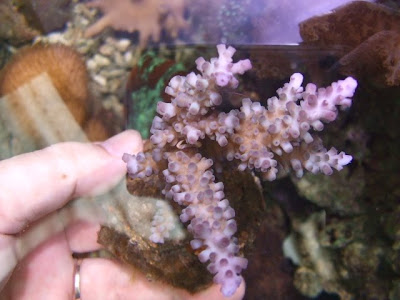 This shot was taken under the Jakarta exporter's display tank. A few days had passed and the coral had lost some color. Surprisingly it photographed light purple. The metal halide turned out to be a 175 watt 14k. From the looks of it, it was probably at least 5 years old! Sure looks like a tortuosa! By the way, remember I put a bunch of acroporas in this aquarium over a week ago? Well of course somebody took them out and put them into the holding tanks:( You hear of the old show Murphy Brown? Well these corals turned "duky brown"! I was very disappointed. 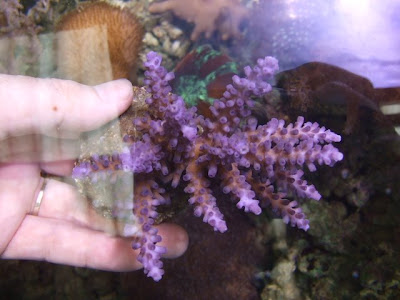 In Bali, this coral is known as an acropora echinata. It is only found in the Northern Bali area. From now on, I'm going to refer this coral as "Eddie's elite edition Bali tort". 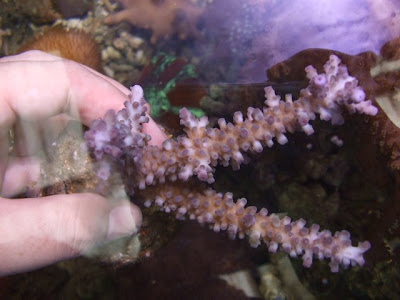 Here is another shot of the special acro. It truly is a gorgeous piece, just need to adjust under some halides. Serious sps geeks will want to add this baby to the collection!

I just sent ten pieces of this Bali aquaculture to the US. Along with it, eight pieces of the Bali tort. I'm dying to find out how the colors would shift under artificial lighting. Only time will tell!

Hi Eddy,
please look at the Link Picture
i have made on my Page :-)
I think it is very good
best wishes

Wow, the banner looks awesome! Thank you very much. Other links feature pictures of nice corals. But mine, features me and my wife! That is way cool. Great job my friend!