Hello everyone.  For the past year and a half I've been working on a special little nano-pico tank.  I'm going to be launching a Kickstarter campaign in July.  If you would like to sign up and try to win one of these, please go to my landing page www.iquarium.us   I'm giving away four units before July.  Thank you. 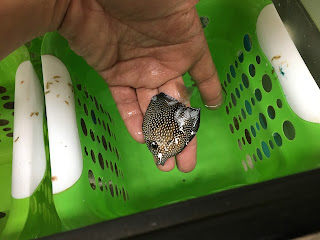 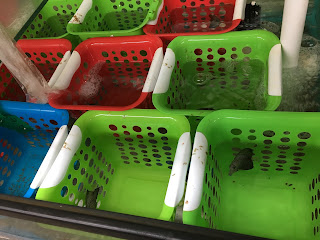 Hi everyone.  So my friend in the San Francisco area just imported a bunch of small sized Gem tangs. These fish come from Madagascar and available now.  If you are interested, send me an email at joylucktp2000@yahoo.com.  Wholesale to the trade only please.
Posted by Eddie H. at 8:27 AM No comments: 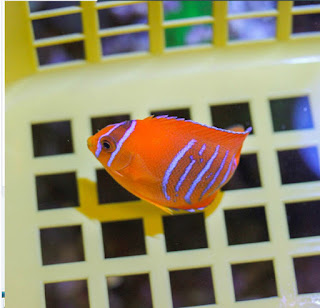 Hello everyone.  Just a quick post to say Clarion angels are available right now.  They are 4-5 inches and fully quarantined and eating.  For more info, please send me an email at joylucktp2000@yahoo.com.  Cheers - Eddie.
Posted by Eddie H. at 6:55 PM 3 comments:

Back in Bali continued...

Hi everyone.  Before we get into today's topic, I'd like to say that my heart goes out to the families and friends of the missing Malaysian airline.  I can't imagine the hell they are going through not knowing the fate of their loved ones.  Few weeks ago I flew on Malaysia Air from Bali to Kuala Lumper to Vietnam to join my wife and my boy.  What if that plane had disappeared instead of the current one?  I would be missing and my family would be going nuts right now.  I hope there will be a good ending to this story.  I heard today that the plane actually turned around and changed course and possibly flew low to avoid detection from radar. I'm hoping it is a hijacking and the plane and the people are somewhere being held hostage, still alive.  Pray for them guys.

So let's get into today's topic, corals!  Although I only stayed in Bali for a short time, I managed to find some nice corals.  Here are some that caught my attention.  But before we get into this, I would like to share a photo that was sent to me by a friend in Malaysia.  Can you guess what these corals are? 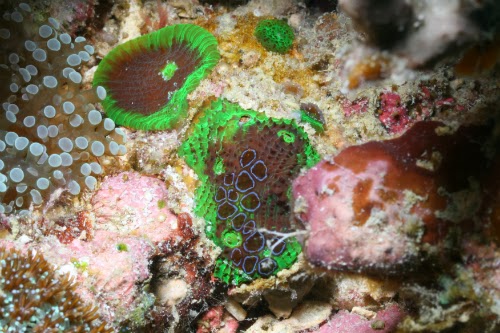 From the photo above, this picture looks like it was taken in the ocean, and not from a captive specimen. Both corals appear to be a chalice (echinophyllia sp.), and the rings on the bottom coral seems to be some sort of a flatworm.  Thank you for sending me the photo Darren. 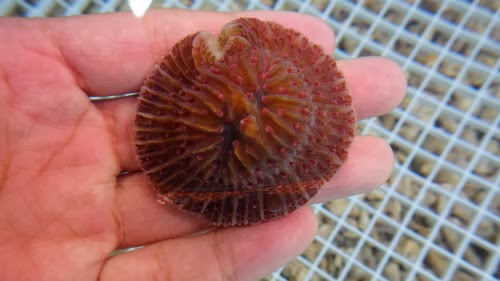 Although the colors on this red fungia are not so great, it is unique in that it has two mouths!  But of course I've seen this type of less colored reds turn into bright incredible specimens in captive environments under artificial lighting! 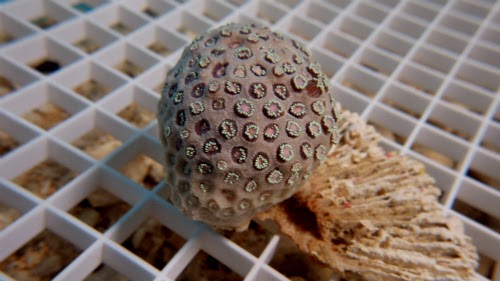 Check out this cute little goniopora!  It sports a pink lavender base with green yellow polyps with pink centers.  Certainly a cool color combo that will enhance any reef aquarium! 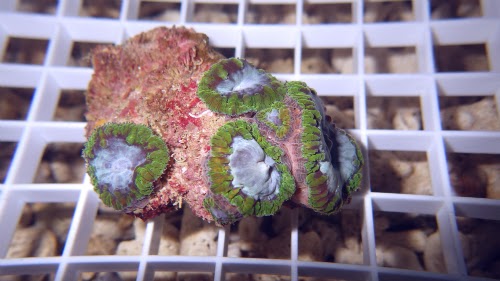 Can you say blue blastomussa!  This picture was taken under T5 10K lighting.  Can you imagine what it would look like under some cool LED's? 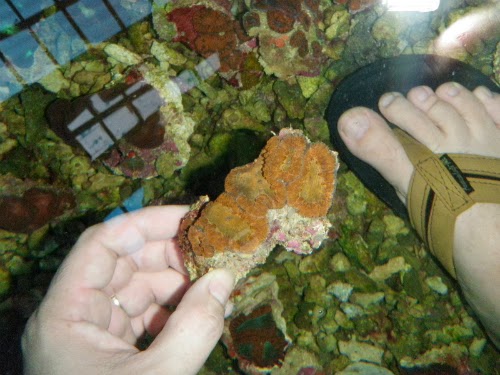 Another nice blastomussa wellsi!  This one is gold centered with an orange rim.  Note I'm standing in water taking the picture.  Always exciting to find exceptional pieces among the hundreds of norm. 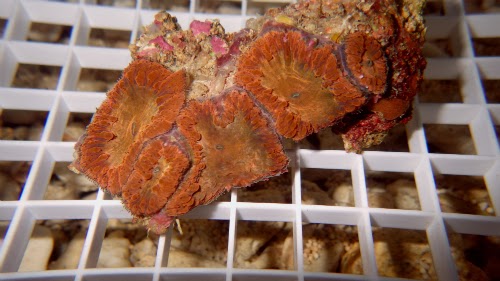 So the same blasto as above but taken under T5 10K lighting.  From this picture you can clearly see that the mouths are green - certainly one of the nicer blastos I've seen! 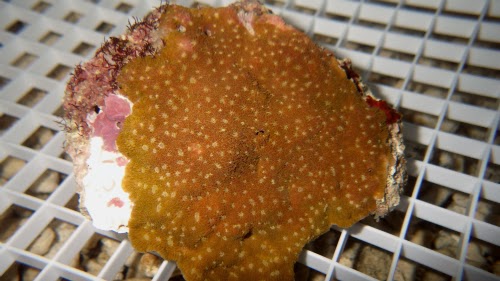 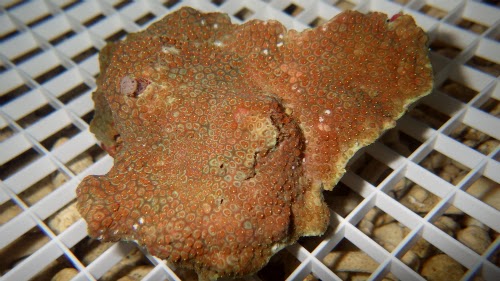 So this unique piece was tucked away among the brown corals, looked totally brown at the supplier's facility.  It has a greenish base with bright red polyps.  For sure this little gem as been sitting around for a long time at the supplier's place.  My best guess is that this is a flat forming deep water goniopora. 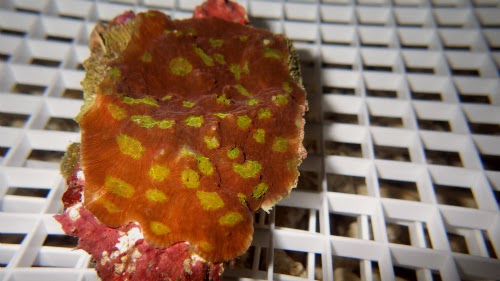 This type of echinophyllia was very popular back in the days.  This chalice is actually a "watermelon" type. You can't see the rim color in this picture but under actinics, the rim color can be seen.  Over time in our aquariums, the rim color brightens and the coral turns into a beautiful piece! 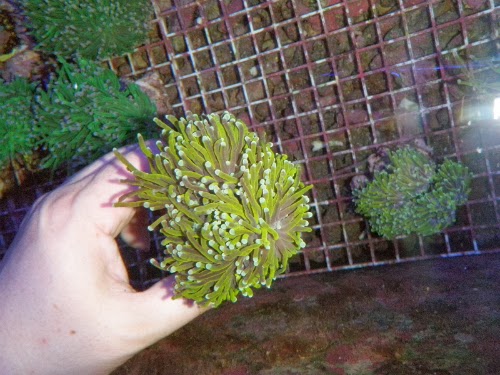 Another coral that is super popular these days.  The gold (or yellow) torch.  I've heard that the Australia version of this coral is very expensive, but again everything out of Australia is expensive!  Note the bright green versions on the bottom left corner. 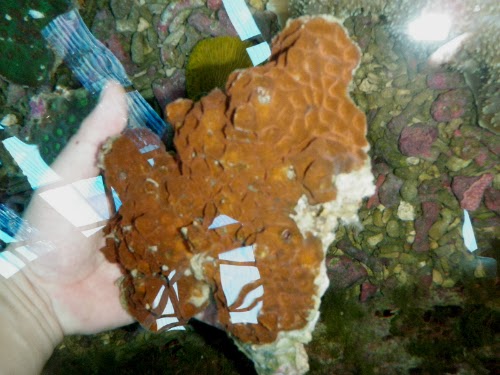 Picture taken at a supplier's farm (in Indonesia, facilities are called farms).  This bright orange favia type will brighten anyone's day!  Super metallic ones like this are not common, usual color morphs are green and reds and some purples.  Another unique find among many commons. 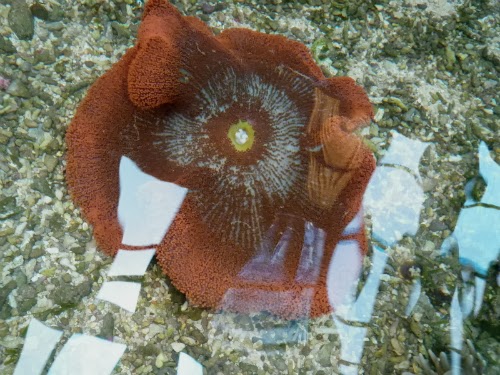 Bad picture of a nice red carpet.  This one is a gigantea species.  The red carpet prices have skyrocketed in the last few years.  Prices range from $80 to $200 from the suppliers - yikes! 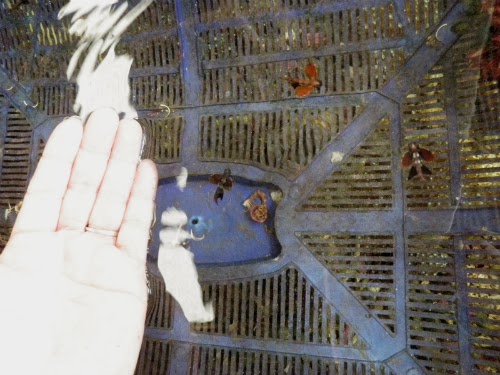 Can you guess what these little fishes are?  Hint, they are have little wings!  These are actually baby flying fish! You can see how small they are when you reference them to my left hand.  Cute and colorful but doubt if they can survive in a captive aquarium.  But what a surprise, you never know what you will find at a supplier's place - and that is part of the excitement when hunting for corals! Here is a video of the cute little guys! 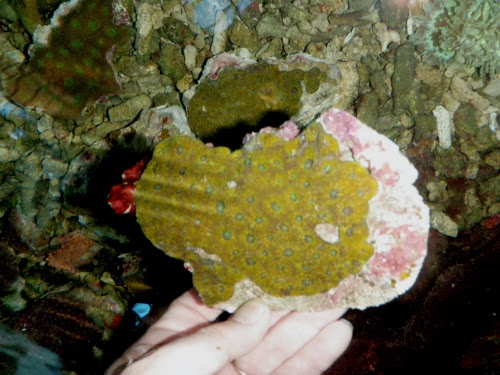 One of the nicer bread and butter acanthastrea species, the echinata.  This one is metallic orange green with green centers.  I remember back in the days the craze for the echinatas, one of them called "orange crush" ! 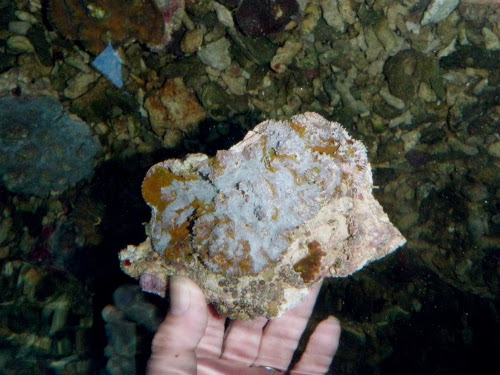 Nice echinophyllia chalice.  Even with the picture taken with flash, you can still see the bluish color on this incredible coral.  Can you imagine what it would look like under some LED's?!


Before I went to Bali I was hearing rumors that Indonesia had found a new batch of a new crazy kind of chalices off of Makassar.  I heard this from several people in the trade and heard of rumors of exporters hording these pieces, even buying them at exorbitant (crazy high) prices.  Well I went to Makassar to check out these crazy echinophyllias that were being horded.  Sorry to say that I found no corals in Makassar due to the Cites quota not being released to the exporters at the time and the suppliers were not stocking up. Because of strict regulations in Makassar, even the fishermen are not allowed to collect corals without proper documentations from the exporters.  And the exporters at the time were waiting anxiously for the quota to be released.  Once the exporters get the paperwork, it is sent to the suppliers.  The suppliers have fishermen working under them that collect the corals.  Without this document, everyone is likely to get fined or jailed if caught with wild corals.

But I did talk to the suppliers about the corals, the availability, the prices and such. The prices have gone up overall and supply on some of the rarer stuff has diminished but there was no such thing as new species of chalices that were being horded.  I did see some pictures of the nicer corals from the past on their smart phones, but nothing that stood out.  Even the suppliers said that there isn't really anything new that I haven't seen.  If anything, the nicer stuff has diminished since I was active a few years ago.  Makes all sense as the nicer stuff was already hard to get, and it has been some time since I made Makassar chalices, Makassar zoas, and other corals very famous and highly sought after.

We as industry supporters (both hobbyists and people in the business) sometimes have no idea what is taking place overseas.  Part of the reason why I started this blog was to educate the public on what is going on, on the beginning supply side of things.  This is one example of how clueless I was before going to Indonesia for the first time.  There was a myth that the Japanese gets the best corals from Indonesia.  And the rumor had it that they have special "jobbers" that cherry pick the best pieces direct from the fishermen before anyone else gets a chance.  Keep in mind that I was not just a hobbyist thinking this, but was a shop owner for many years, besides the huge maintenance company that I ran.  So it was not like I was a newbie thinking this, I was well experienced in the trade.

Of course when I got to Indo I found things a bit different.  There were no such thing as Japanese guys buying direct from fishermen, or even heard of Japanese people staying in Indo.  So that myth was busted right there.  Rather what was happening was that the Japanese was buying from high quality exporters like CV Dinar.  And Dinar had their own people cherry picking from the suppliers and they were the only one. So of course they had quality stuff all the time.  I made the Dinar guys miserable during my days as they all of a sudden had competition in cherry picking corals in Makassar with me.  But in all due fairness, Dinar never complained about me or tried to stop me from doing business while many other exporters did.  So I have lots of respect for Dinar and they still are the number one exporter of fish and coral.

I am back in the US now on the East Coast.  I live in Southern Maine and it is cold as hell here!  Well not hell but very cold indeed lol!  I already miss Bali and hope to return soon.  Hopefully in a few months my special aquaculture project will be ready for export.  And of course you will hear all about it before hand on my coral adventures blog!