Hello everyone. We will discuss the acclimation of deepwater acros to high lighting later in another thread.

I just came back from Makassar, Sulawessi, getting corals. Sulawessi is the large island north east of Bali. It is about an hour plane ride from Denpasar. Makassar is one of the big cities of Sulawessi. It is located in the south west part of this large island. The next 3 or 4 posts will be dedicated to this beautiful area of Indonesia. I will post pictures of corals that I found later on (some awesome pieces!). Because of unique climate and water currents, this area produces spectacular corals. For example, red goniopora with purple or yellow centers only come from this area. Purple tip and blue tip elegance corals are common here as well. Other parts of Indonesia also have these corals, but lack the beautiful colors. Majority of blastomussas are found in these waters too. The pink and red yumas are not uncommon. I can manage to get 20 + pieces on a trip. When I had my retail shop, I was lucky to see 3 or 4 pieces in a year! 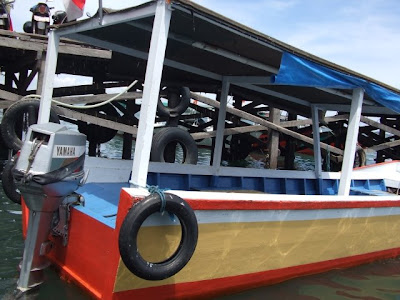 I usually get to Makassar right before noon on a given day. My normal routine is to meet up with one of the suppliers and go to his fishermen's island. Like the exporting companies teaming up with fishermen for aquaculture, the suppliers also have a deal with the coral collecting fishermen. There are handful of suppliers and they usually work with their own fishermen from different islands. The above is a picture of a boat that takes us to the islands. Some of the islands are far off as 4 hours away. The closest island that corals are collected is only 30 minutes out from Makassar harbor. 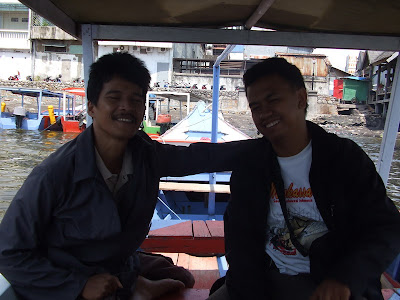 Two friends on the island. The guy on the left is Husaih (pronounced Hussein), and he is one of the suppliers. The guy on the right (his name is Nur), works as an advisor to the Ministry of Forestry (in Indonesia, this department is in charge of the coral trade). He is also my translator. Without him, I'd be dead! Thank you Nur!! 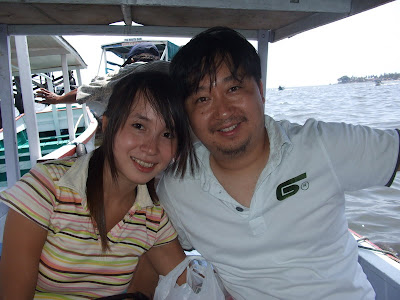 Picture of my pretty wife and me on our way to an island. 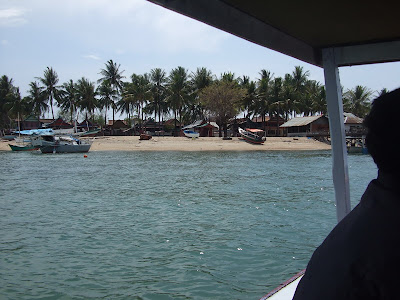 The first island off the port is only 10 minutes away. Not too many people live there, as it is a very small place. 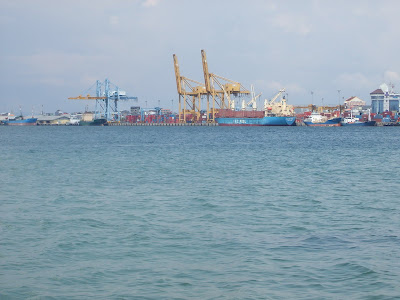 This is a picture of Makassar port, as we were leaving the mainland. 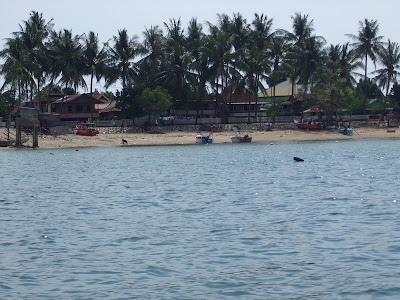 Another shot of the small island as we were passing by. 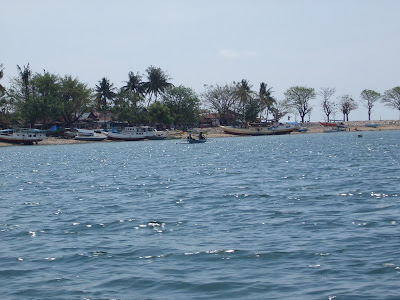 I could picture a nice resort being built here in the future! 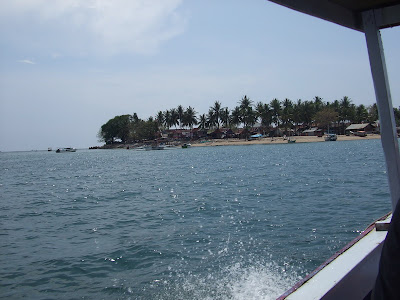 It totally reminded me of the small islands in Tonga! 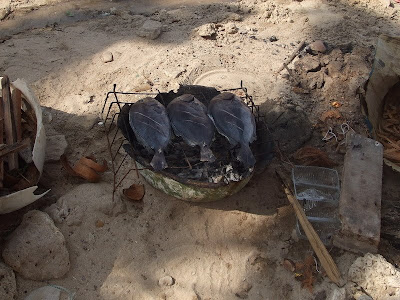 One of the first things that we do upon arrival to the island, is to have lunch. Here the locals are grilling fish for us. Note the dried coconut husk that is used as like charcoal. 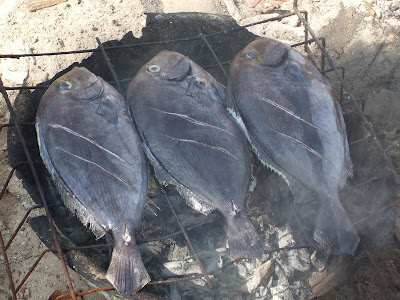 Here is a close up picture of the fish. They look like Villamingi tangs! 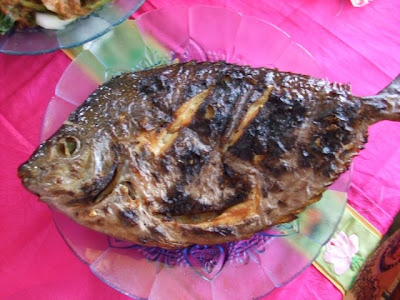 And here it is on the dining room table. These tangs are full of meat and are very tasty. 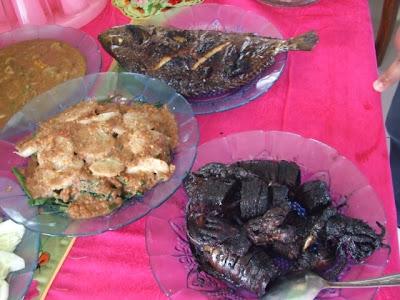 Check out the squid cooked in it's ink! Taste so good, but leaves you with black lips. The dish on the left is vegetables with peanut sauce. I'm not sure what the other stuff was on top of the vegetables, but I ate it anyway! 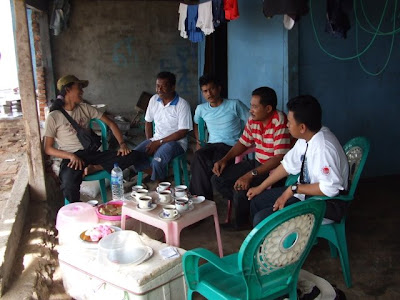 Here we are, after lunch drinking coffee and tea. We had nothing to do as we were waiting for the fishermen to return with the corals. 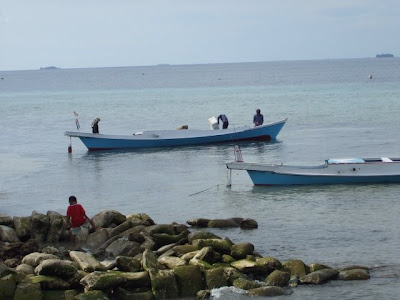 Check out these fishing boats that they use. They looked different than the ones in Bali or East Java. 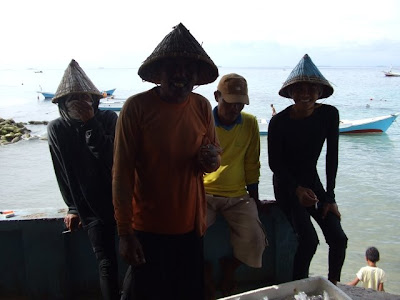 And here are the fishermen. One boat has two or three divers and usually a boatman. Sometimes as many as 10 boats can go out in a day. They scatter all around and go to different areas, looking for different species of coral. 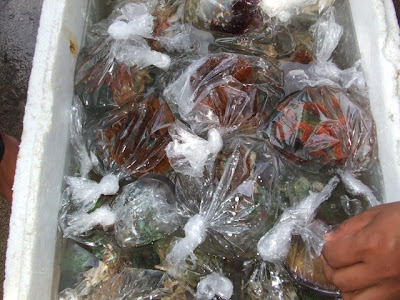 Each boat comes back with 3 boxes of corals. Each coral is wrapped in plastic as to minimize the damage. 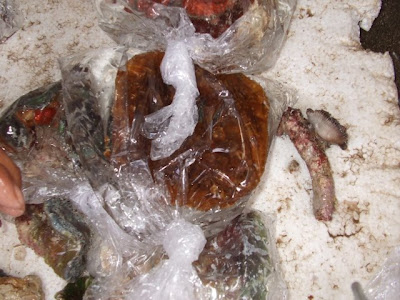 A nice red oxypora. The suppliers and fishermen refer to this coral as "poca coral", meaning montipora (they think it is a montipora capricornis). 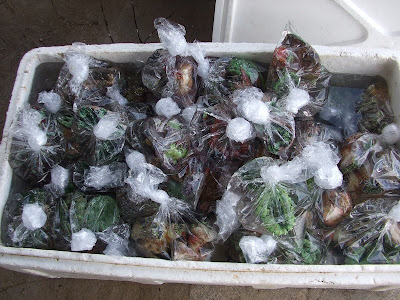 A lot of corals can fit in one box! 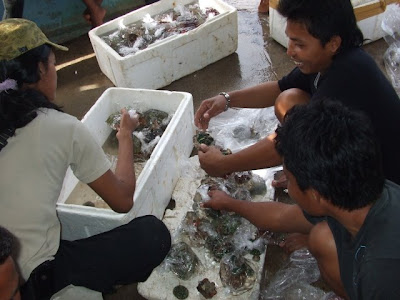 The corals are sorted by a "professional" sorter for size and color. There is a small percentage of corals that are rejected and taken back to the sea. These are damaged corals or not suitable for sale. After the sorting is done, the fishermen are paid on the spot (or at least this supplier pays on the spot). So it is in the best interest of the fishermen to bring back only corals that are desirable. This is crucial as not only wasting time on the not so good looking corals, but also to preserve the environment. No need to take unnecessary corals from the wild if not needed. This was one thing that I really emphasized on with my divers in Tonga. When I got there, 75% of the corals that they were collecting were useless. In 3 months, with me training them on a daily basis, they learned the species and color of the desirable corals. They were coming back with 95% good corals, and I didn't have to be there with them. The guys didn't know the difference between the good and the bad. Nobody had taught them and for sure there was a lack of leadership and knowledge.