Hello everyone. Finally after two days of on and off internet connection, I'm finally able to upload pictures. I was going to do another write up from my McDonald's adventures to keep you guys entertained, but the internet started to work. So let's backtrack about a week ago, when I went to Banyuwangi. As usual we took off from Tanjung Benoa at 4 am. We arrived in Banyuwangi at 9 am. We hit the first supplier, but nobody was around. The gate was locked too. After 10 minutes one of the workers showed up and told us that the shipment from Sumbawa was a little delayed. The buses were running late. While waiting, I took this little alley way down to the water's edge. 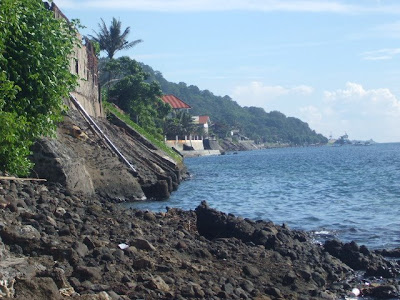 It was a beautiful crisp morning and the sky was clear. 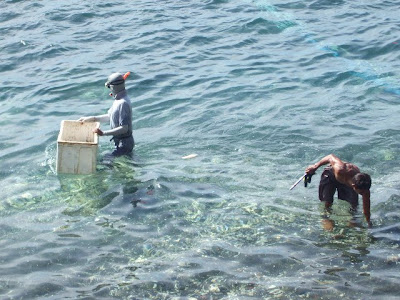 About 30 feet out, some of the local fishermen were collecting liverock. At first I couldn't figure out what they were doing. They were wearing snorkel and masks. Then I saw them pulling rocks from the seabed and put them in the styrofoam box. It was relatively shallow about waist deep. The water was crystal clear. 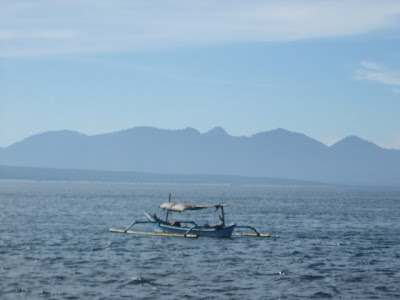 Out in the distance, a lonely boat was floating. I really didn't see anyone on it but it wasn't moving. It was anchored and the fisherman was probably in the water nearby. Note the Northern Bali mountains in the background. 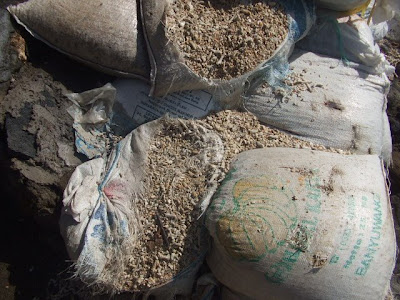 Near the water's edge, there were these bags of crushed coral. These were probably leftovers from building the biological gravel bed at the facility. 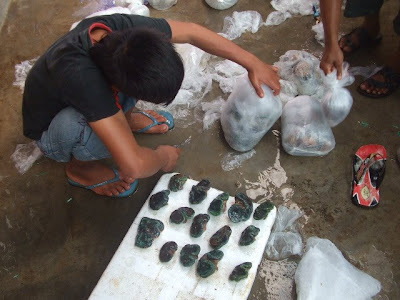 After about half an hour, the little truck drove up with boxes of corals. Each bag holds 4 -8 pieces. Of course every piece is wrapped in plastic so they don't rub against each other and get damaged. 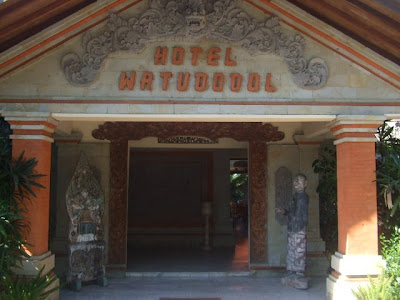 On this trip, we decided to stay overnight in Banyuwangi. I was told that there was another shipment coming in the next morning. Being the cherry picker that I am, it would be advantageous for me to stick around. Besides, then I wouldn't have to rush to Northern Bali to get the acros. The plan was to stay overnight and go get more corals in the morning, as I had lots of shipments to prepare for. 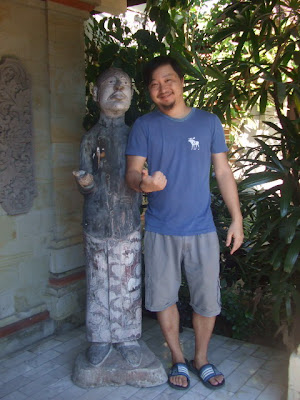 This hotel was called Hotel Watudodol. It was right next to one of the suppliers. In this picture, me and my friend are actually trying to hitch a ride back to Bali :) 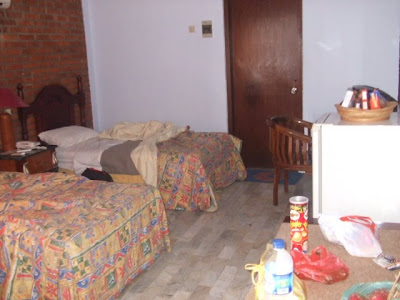 Me and my translator / driver stayed in this room for the night. Not bad for being only about $21 a night and free breakfast in the morning. 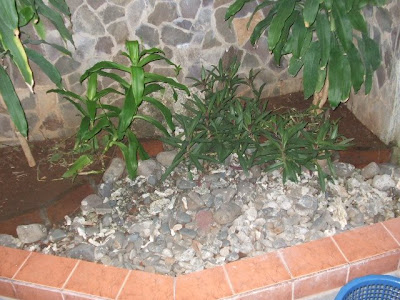 The bathroom was kind of neat. One section was opened to the sky. It was like taking a shower in the outdoors, pretty cool. It even had plants growing in there. 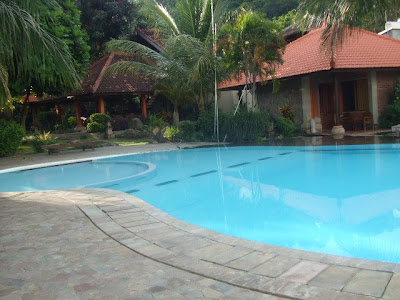 Nice swimming pool area. I suspect this hotel is somewhat a tourist spot, although I didn't see any other people but locals. 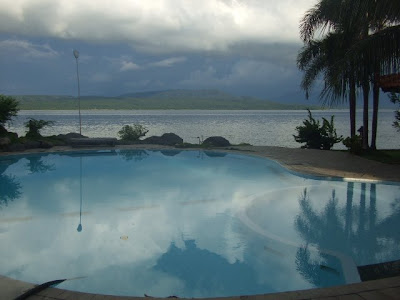 Looks just like from a hotel brochure! I think I'll go swimming next time around. The view of Northern Bali is breath taking!

Now for some corals from this trip. I was mainly after trachyphyllias and cynarina desheysianas from the Sumbawa supplier. As usual, I found some neat specimens. 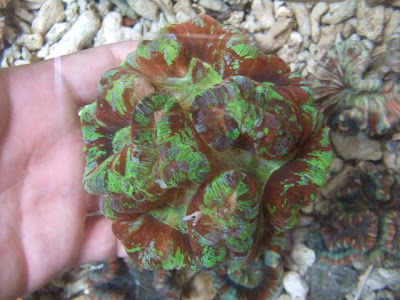 This very nice Bali brain was hiding among the old stock. It looked like it had lost some color, but no matter, as these type of corals color back up very quickly. 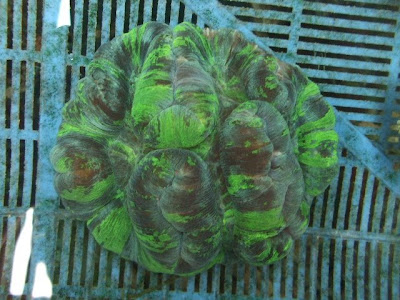 Nice green Jakarta brain. If the trachyphyllia has a flat bottom, it is called either a Bali brain or a Jakarta brain. If it is red and green, it is a Bali trachy. If it is green, it is referred to as a Jakarta brain. On the cites here in Indonesia, this coral is represented by "Wellsophyllia radiata", which the fish and wildlife officers in the US does not recognize. Even Dr. Jen Veron does not mention this in his Corals of the World volumes. It is an old term and should not be used. 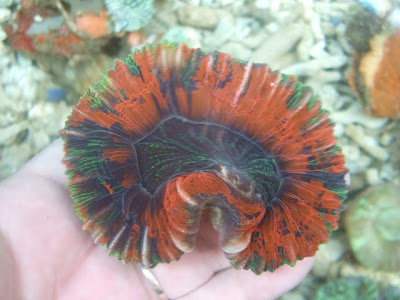 Check out this little baby! One word - beautiful! 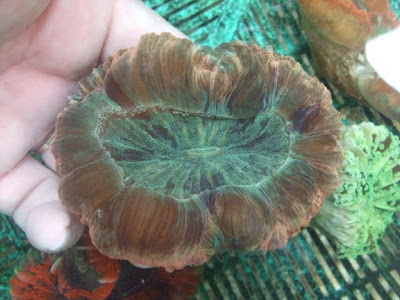 Unique colors like this are not common. The only ones that truly appreciate these color morphs are the Japanese. As a matter of fact, one importer from there is coming to see me in Indonesia. What can I say, they want my corals! 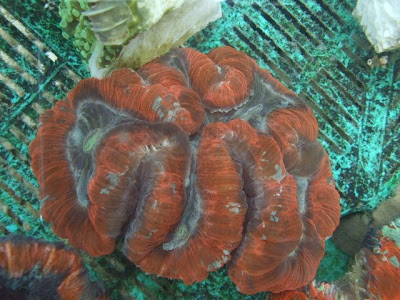 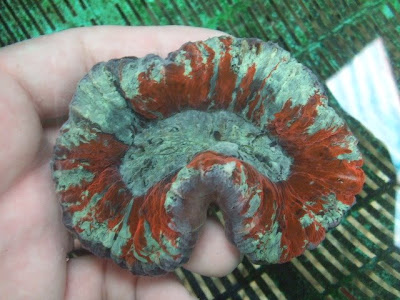 Another cherry specimen from Sumbawa. 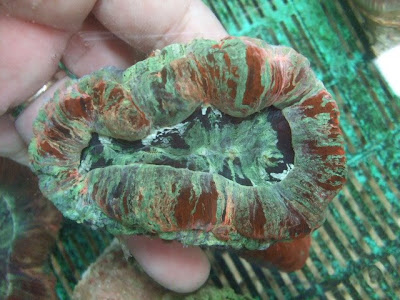 There were only two of these unique color morphs out of hundreds. They are rare indeed.

Now let's talk about the amazing meat coral called Cynarina desheysiana. This coral is commonly called a Scolymia. Even in the US, the wholesalers sell these as "scolymias". But if you send them under scoly's on the cites to the US, they will be confiscated and the fish and wildlife officers will tell you that it is a cynarina. They don't know what the correct species is, as the booklet that they use to id the corals, mentions only one cynarina species. Even Dr. Veron says that there is only one genus and species for this coral. But the Cynarina lacrymalis looks a little different from these corals. They do look similar when they are small. The common name for these corals are called donuts. 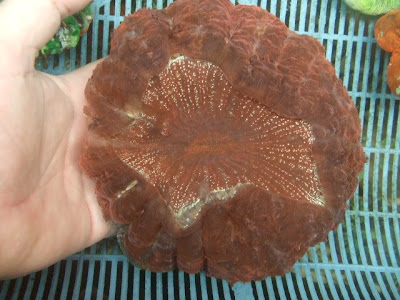 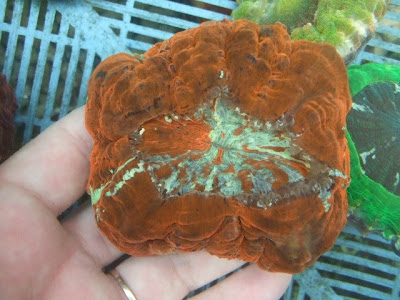 You can just imagine how it will look under some halides! Totally metallic for sure! 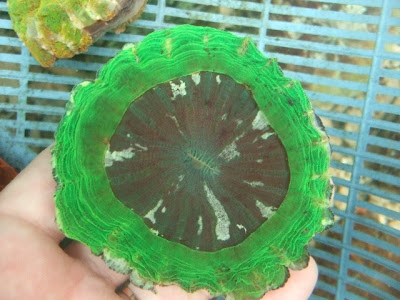 Oh wow! Green metallic ones like this are rare. There are other metallic green donuts, but this one is exceptional. Truly a beauty! 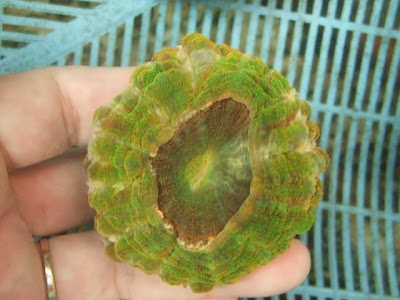 Check out this little metallic green/orange specimen! I've never seen this color before. You can just tell that it would glow under some halides. 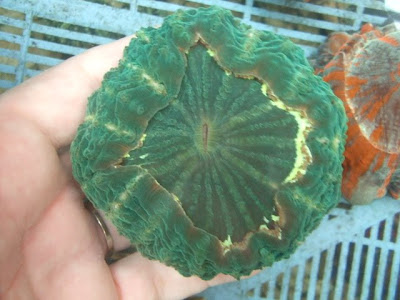 Have a look at this beauty! The green is insane. The gold lining makes this piece truly a cherry piece! 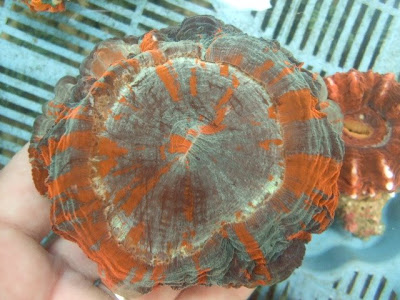 This is probably the most common color morph of the donuts. Still this one has orange metallic stripes! 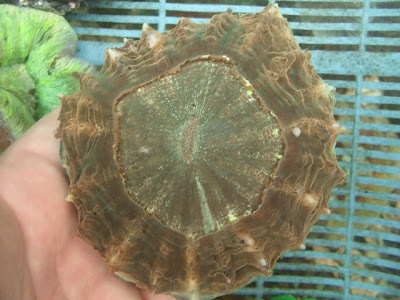 Another strange orange and green cynarina desheysiana. It would be interesting to see what happens to the color under artificial lighting. 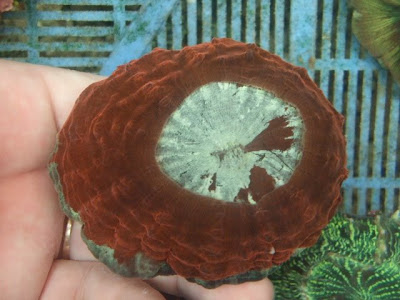 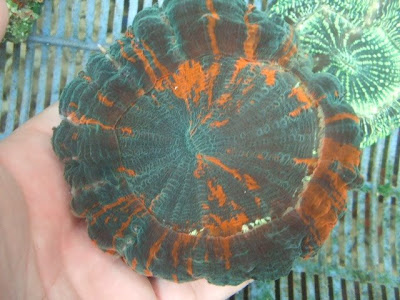 Another unusual color morph. I love these deep color morphs of these donuts. Someone should collect them all! 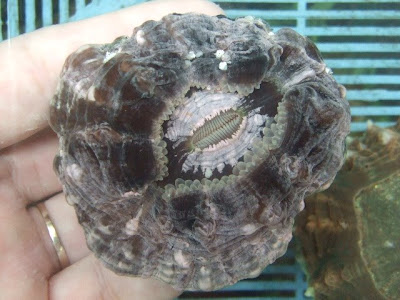 Ok this one by far is the coolest donut I've ever seen! It is purple! Crazy man! Only if I had a tank, I would keep this one for sure! Truly one of a kind piece!

Stayed tuned for tomorrow, as we journey to Northern Bali for acros!

I live vicariously through your adventures. Tell the statue dude I said hi. ;-)

I will be heading back to Banyuwangi after Makassar. I'll tell my wooden friend you said hi! :)