What a day yesterday was!

So we got to Banuwangi at 9 am. By the time we got to Northern Bali, it was 5 pm. So we had to hurry as the sun would set, and don't want to pick corals in the dark. To make it worse, it was drizzling. After picking aquaculture, we hurried to a coral supplier who specializes in deepwater acros. By the time we got back to Tanjung Benoa (home), it was almost 1 am. 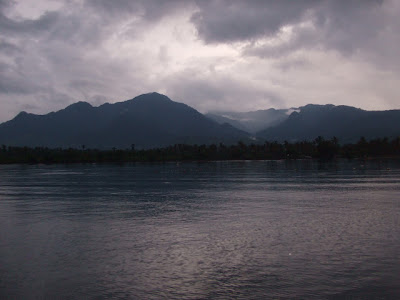 A beautiful picture of Northern Bali! 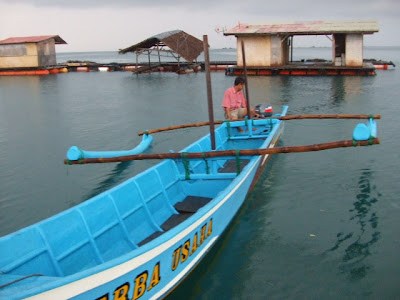 We hopped on this modern boat with a real 15 hp Yamaha outboard! Woa, we rode in style. However, the engineer who designed this boat needs to redo his math. The stabilizers are too short and the crossbeams should be longer and lower to the water. Needless to say, it was nice not to hear the typical loud motor of normal fishing boats. 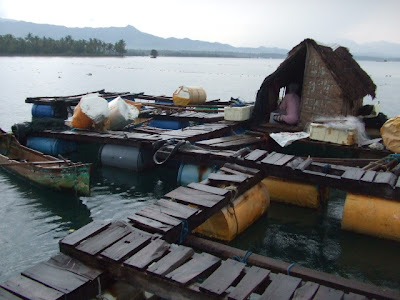 This was a new aquaculture supplier that we went to. The walkway was much wider than the other guy's place. The problem was that the rain made the wooden planks slippery. I almost ate Bali saltwater a couple of times! 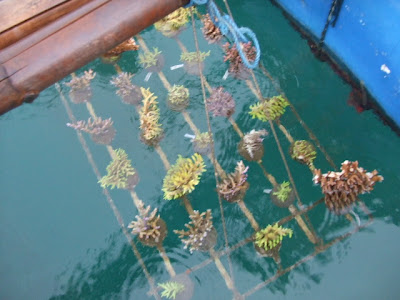 Typical racks that these corals are growing on. This guy had some growing like this and some others deeper down. The racks were down about 10 feet, and the others are down at 25 feet at high tide. Note the small white tags sticking out the side of the corals. This really caught my eye. 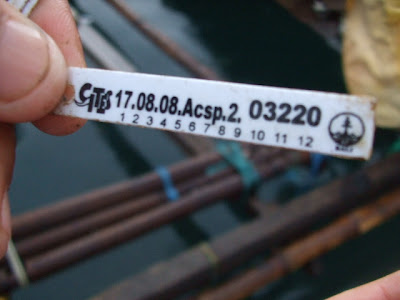 Check this out! This is a close up view of the white tags. No one spoke English well, so I couldn't find more information on it. Still, pretty cool to see that there is some monitoring going on by CITES.

Here are some corals that I found on this trip. 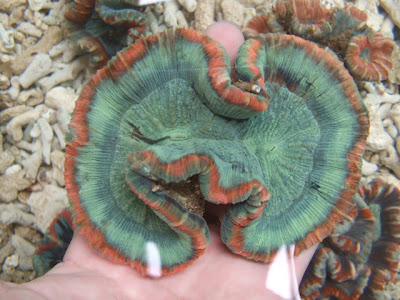 Check this out! A way cool Bali brain. It would look crazy under halides for sure. A super trachy from Sumbawa. 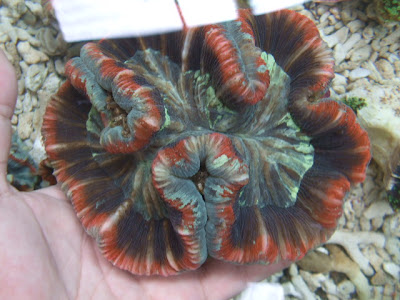 Another beautiful specimen. These guys are not fully opened yet, but can open up very large. 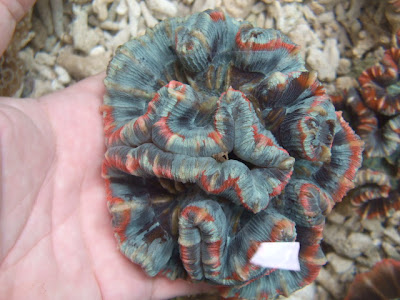 A Japanese style Bali brain! I've seen pictures of this coral with similar color morphs in Japanese magazines. Another beauty from Sumbawa! 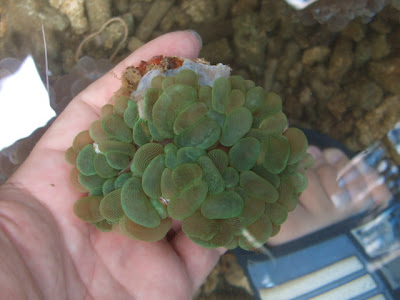 Green bubbles are one of the stable in the aquarium hobby. Super nice green ones like this are not that common though. 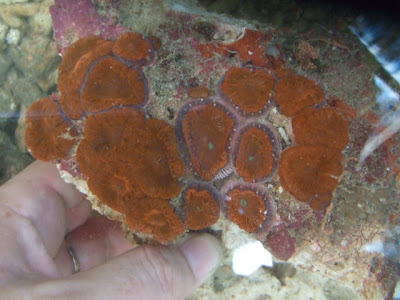 A beautiful red blastomusa! The ones from East Java are little different than the ones from say, Sulawessi. Most of these have one solid color. I'll post pictures of Sulawessi blastos later on another thread.

And now, pictures of acros. Just so you know, acroporas are my specialty! 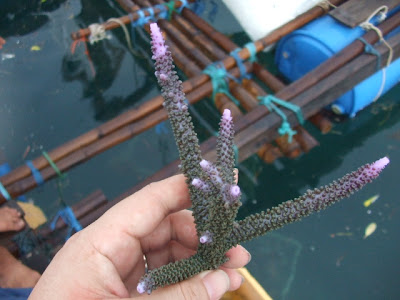 So the divers were collecting samples for me when they brought up this nice stag. They broke it off of a larger piece. I asked them if they had any that was being cultured, and they said only a few. Being so nice of a stag, I took it with no base. Very pretty, green blue with purple tips! 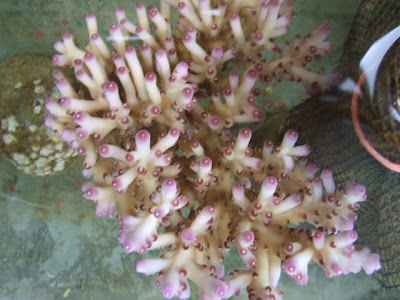 A beautiful acropora loripes. You must really see it for yourself to appreciate it. Just plain beautiful! 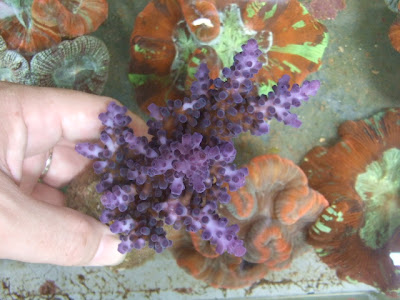 A large aquacultured "echinata" (true species name is probably gomezi). I'd really like to see how this coral would turn out under halides! 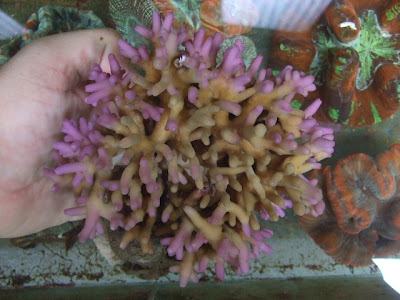 This acropora granulosa was glowing at me from 10 feet! I was like, wow, got to have the piece. I was thinking my customer Mark would like this for sure! Green with purple rim, and it is tabling. 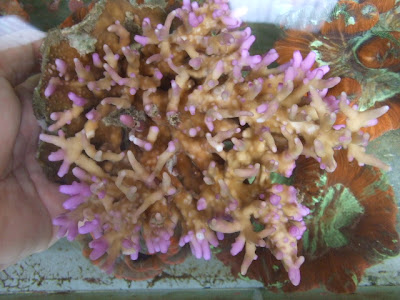 Typical of deeperwater acros, base color being green - brown with some colored tips. Nevertheless this granulosa has the potential of becoming a super coral under artificial lighting! 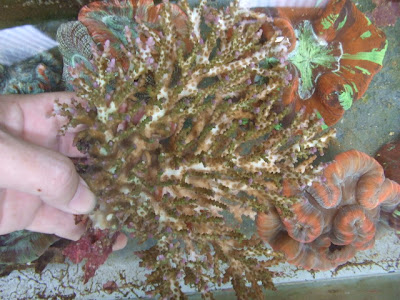 Check out this baby! If you guessed wild tabling acropora desalwii, you got it. This deepwater acro is not that common. Most people mistake this coral for acropora plana or subulata. This one has green polyps with purple rim - sweet!! 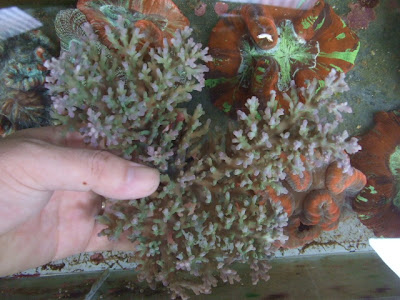 Here is another deepwater acro. Can you guess the species? My guess would be an acropora carduus, though typically these corals are usually all brown. They had other ones, but this one was the only one with color. Definitely has potential, but needs metal halides. The best thing to do with these kind of deepwater types of acros, is to slowly acclimate it to artificial light. At the end of this thread, I'll give my recommendations on how to acclimate these type of corals to stronger lighting. 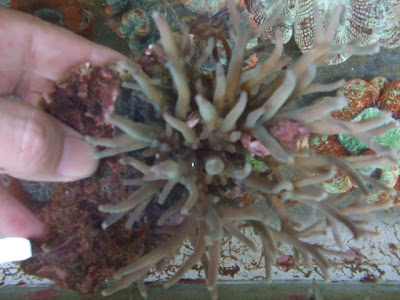 One of my very favorites! An acropora Suharsonoi. Typically brown, but this one is nice and green. With some color morphs, this coral can possibly turn bluish color under artificial lighting. Just so you know, this coral is named after the Indonesian diver named Suharsono, who discovered it years ago. This coral is only found in the Northern parts of Bali. The only problem that I have with this coral (and many others like it) is that it grows very slow. 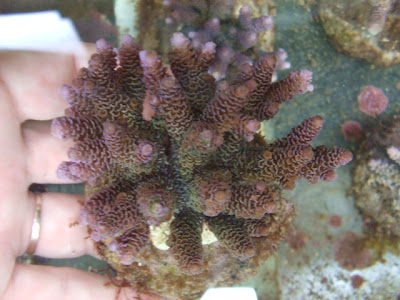 Can't have a list of corals without a milli! This acropora millepora is one of the easiest corals to keep. I used to recommend this coral for beginning sps keepers. Funny thing, this species of coral from Indonesia are much easier to adapt to artificial environments than their cousins from the South Pacific (Fiji and Tonga). Can't explain it, being the same color and species and all. 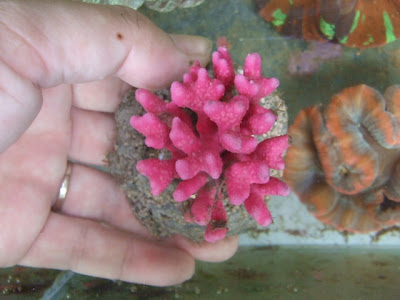 So the guys who had this couldn't wait to show me! They thought it was a rare color of montipora. Although it looks like digitata, it is actually a deepwater distichopora. I told them to make sure that they put these way on the bottom of the ocean to grow. They will have to wait a long time, as this non photosynthetic coral grows super slow. Nevertheless, I did picked it up and will send to Mark. 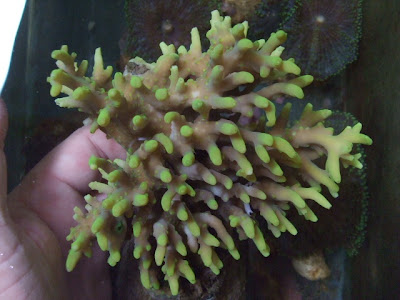 A very nice yelllow - green acropora caroliniana. The South Pacific species of this coral look like the acropora jacquelineae. I didn't find any of this coral on this trip, but I know that they are not that uncommon. 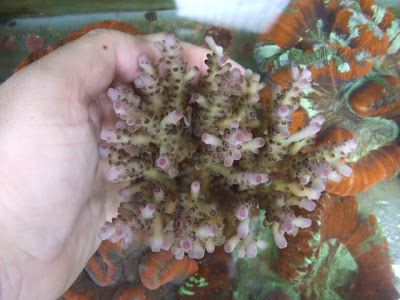 Another acropora loripes, perfect size for aquariums. Keep in mind, these pictures are taken under natural sunlight in a warehouse. This coral would glow under some actinics. 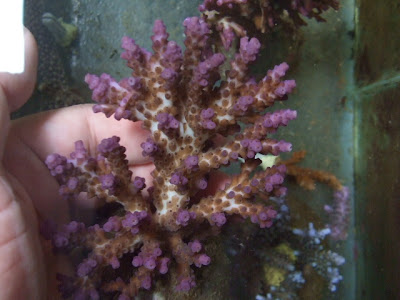 Acropora Subulata! This coral is very dark purple in color and the tips should color up nicely under some 20k ushios! 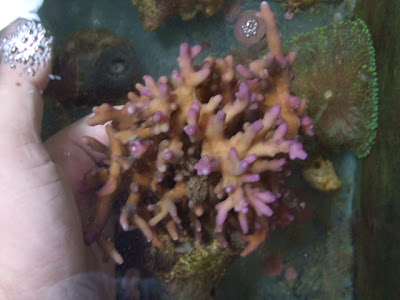 Can you guess this deepwater acro? If you guessed acropora awi, you are wrong! I know, awi doesn't look like this. I was just trying to be funny! This is an acropora lokani. These and the granulosa type of acros can look very similar. If you can turn this one into a super dark purple morph, then you will have "Eddie's purple monster". Steve Tyree's original purple monster was definitely this type of coral too. I had a large encrusting frag that Steve had sent to me as part trade for my purple monster, along with my true undata and others. I no longer have any of these corals. But one day, I will have my own tank again and will have all of my old pieces back! 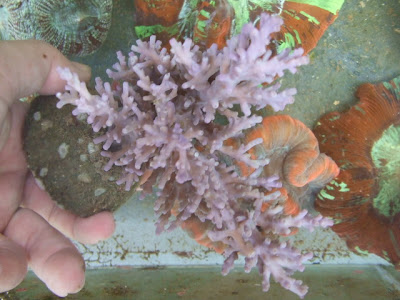 This acropora is very hard to identify. It is light purple and feels fragile. My guess is that is an acropora fenneri. I wonder if there is any reference to Bob Fenner? Bob is an author, speaker, and an expert on corals and fish. I had a chance to meet and talk to him. When the old reef club BARE (now changed to BAR), was around, I helped the club sponsor Bob to come do a talk. He did a nice presentation on diving in Sulawessi. He had beautiful pictures of corals and fish that he took when diving there.

I'll post more pictures of corals from this trip tomorrow. But before I say goodnight, lets talk about acclimating deepwater acros. Just keep in mind that anything I say is based on my own experience as an sps reefer.

Since most of the deepwater acros receive less sunlight in nature, it is important to acclimate them slowly in our aquariums. Because we are sps keepers, and we do have powerful lighting, it is important that we don't shock the poor corals. Did you know that the corals color up to protect themselves from the harsh lighting? In other words, corals in nature for the most part, don't have these awesome colors like we do in our aquariums. Most corals in the wild are brown! Let's say we shock a brown coral under some 400 watters. The coral needs to protect itself from the sudden bright light. So the symbiotic algae that lives in the tissue of the corals starts to color up to protect its host (the coral) from getting toasted! The algae known as zooxanthellae starts to color up, depending on what kind of light spectrum (kelvin) is exposed to. In our experiences, it seems like more blue spectrum causes the algae to color more intensely. In some cases, the zooxanthellae totally morphs into a different color. So this explains why we don't see the crazy colors of corals in the nature. Well, there are some, but I say 90% are brown. So the trick is to try to start with this 10% of colored corals to begin with, and we will have a much more success rate of keeping colors in our corals. Let's face it, nobody wants to look at dull colorless corals in our tanks.

Let's talk about the symbiotic relationship between the algae zooxanthellae and the host coral. Symbiosis means that both living things are benefiting from each other, by living together. The obvious example of this is the relationship between clownfish and anemones. So let's look closely at how the coral and the zooxanthellae algae benefit each other.

The algae in the coral is a plant. All plants need sunlight to photosynthesize. Using the sunlight (or halides) the algae produces oxygen and sugars (nutrients) that the coral (polyps) need to grow. In return, the coral releases carbon dioxide that are essential to the algae. You heard of coral bleaching? This happens when the coral stresses (high water temp is mostly to blame), and expels its zooxanthellae! Most of the time, the coral dies and bleaches totally white, the color of its skeleton. Sometimes, the coral expels some of its algae and can recover. In our home aquariums, there are multiple reasons why a coral can loose its zooxanthellae, including low calcium levels, too much nutrients, not enough flow, etc..

I think we got off the main topic of acclimating the deepwater acros, I'm not sure what happened. But let's talk about that and other corals tomorrow. It is 12 am and I need to sleep as I'm waking up at 5:30 to catch the low tide at Serangan (I've been misspelling it Sarangan) beach. I'm meeting the fishermen to look for more aquaculture corals for Mark. For all of you that are in England, Mark is the owner of Taunton Aquarium Center. Most of these corals and in the next posts are all his. Cheers - Eddie.
Posted by Eddie H. at 4:52 AM

wow eddie, where are these deepwater gems going?!

When you go to korea,please let me know. I am not sure I can talk to you in English.. :)

We also can have SPS and LPS from Indonesia via LFS, I think your coral is better than ours.

You do not trade in Korean LFS...
correct?

These corals are all headed to England.

I can speak a little korean, so we can communicate. We do not sell to anyone in Korea yet. I can let you know when we do.

Man, your pictures are awesome. I love seeing all the corals but I'm even more fascinated by all of the pix leading up to the coral shots; the beautiful skies, the boats ... keep it up!

I'll make sure to include more pictures of settings on my posts. Thanks for keeping up.