Let's keep talking about Bali aquaculture. There is an island called Sarangan that is about 30 minutes away from Denpasar (the airport). There is a dirt road that is man made that connects the island from the mainland. Because of the clear shallow beaches, this area is a superb place to grow corals. Good surfing there too.

So here is how it works. Once the exporter acquires the license to export aquaculture corals, he or she is responsible for providing equipment to the local fishermen to upkeep the goods. This equipment includes the racks that the corals grow on. Sometimes, the exporter also provides the broodstock as well. It all depends on what kind of a contract that they have. For the most part though the fishermen are responsible for making sure he or she has a good stock of corals growing at all times. Usually the exporting sponsor company only buys from his or hers contracted fishermen. So the fishermen have different techniques of aquaculturing, depending on which kind of racks and ideas that was implemented from the beginning by the exporting company. 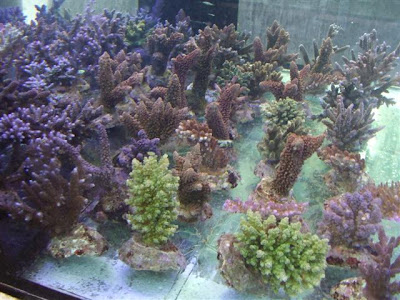 These are some of the corals that are grown on Sarangan Island, also known as Turtle Island because of a turtle nursery. 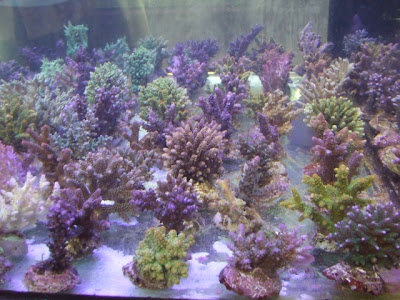 Some more corals of Sarangan aquaculture. These make up the majority of aquacultured corals that are exported from Indonesia. 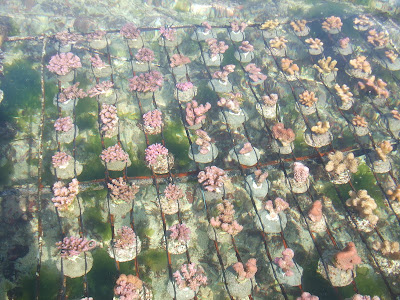 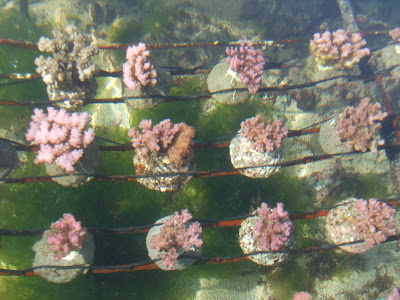 Here is a close up shot of the corals being secured. These are new mounts and won't be ready for months. 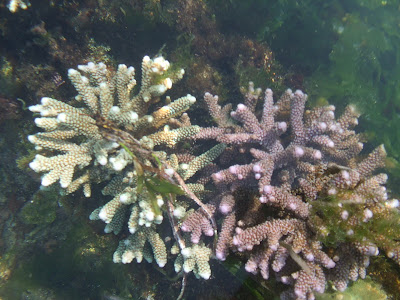 Some of the broodstock. These a couple of years old, and they were grown from small pieces. So yes, they actually do grow broodstock at Sarangan. 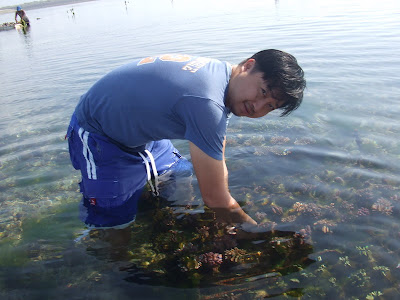 My wife took these pictures as I was collecting for a ship out. 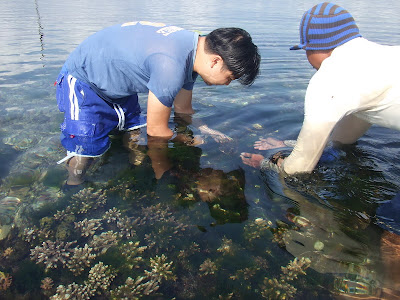 And here is the cool coral guy, hard at work with a local fishermen! 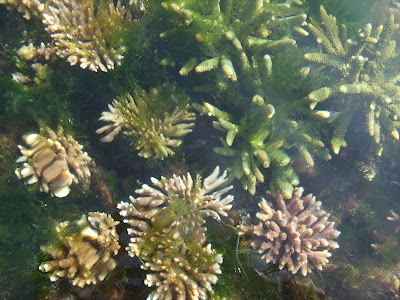 One of the inherit problems of growing corals in shallow water is the, you guessed it, algae. Just like our aquariums, the fishermen are always battling this nuisance. 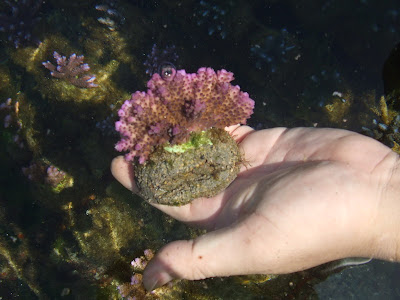 A cool little find! An Acropora efflorescens, fairly a new mount. I actually think this coral is the same as a coral known to us as a solitaryensis. I'll tell you later why I think on another thread. I put this piece back thinking I would come and get it in another couple of months. I hope I can find it again! 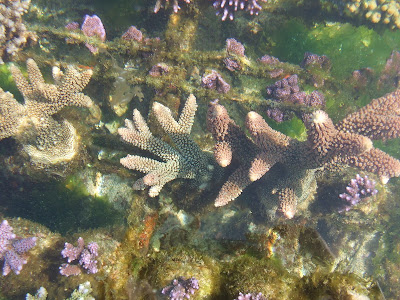 Some cool looking abrotanoides. The tips go crazy under halides on this baby! 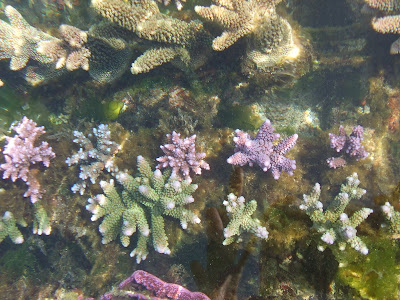 For the most part, the corals are uniform in size. The larger ones are the ones that weren't sold yet and kept growing. 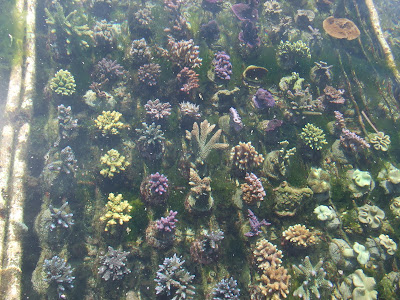 Again the algae! Though the fishermen are for the most part, good at keeping it under control. Note the soft coral, sarcophytons on the right. I also saw nice lobophytons and a few other softies. 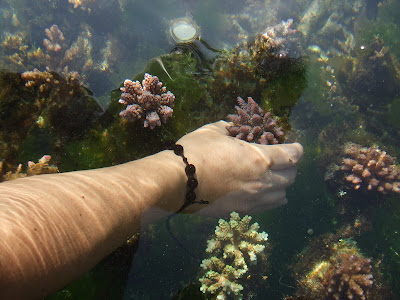 I pulled this little guy from a rack full of algae! What a find, can't tell by the picture very good, but it is a killer purple - green tenuis. 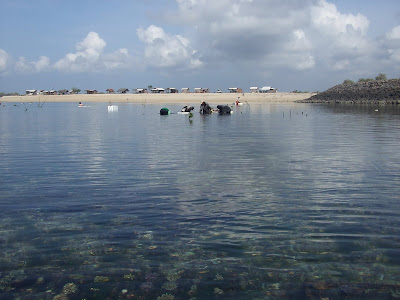 And here is a shot from the water looking back at the beach at low tide. Notice the small makeshift shelters at the top. The fishermen can hang out and rest in these places. Tourists also hang out here too. The fishermen live on the island. About 10 minutes on a motorbike on a dirt trail, leads to a village where all the fishermen live.

Well at least now you get an idea of how the corals are grown on Turtle Island.

It is 10:45 pm right now. I will walk back to my house (I rent one with 4 bedrooms for $3000 a year). I live by myself and the other rooms are reserved for my old divers from Tonga. I plan on bringing them in this year to help me with my operation here. Can't be running around all the time for corals. I got a wife and a life to live too. The house sounds cheap but not so for this area, although my little dwelling looks very modern. The good thing is that it is only 400 feet from our farm. Then after a 5 minute cold, very cold, shower, I will boil hot water for a cup of noodles. This is my snack before hitting the sack (hey that rhymed!). Then I'll watch a little TV, or if I feel like, throw in last year's series of "Heroes"on dvd. Man that tv show is addicting like hell! The first time, I stayed up all night watching. Then I woke up a few hours later to continue watching! What I want to know is, did Sylar have any powers to begin with? Or did he just eat the brains of others and gain their powers? Still I like him, he makes a good bad guy!

Just so you know, on late night TV, one station here always plays American movies. Too bad it is always (well not always but enough), Steven Seagal or Van Dam "B" movies! Holy crap, I had no idea that these two made so many "B" movies. Ok, I'm going to stop babbling now and head back to the house. Besides, in 5 hours, I'll be heading out to Banuwangi for more corals!!!

If you have any chance to come here, please let me know I can give you duck bo kee and odeng any time...LOL..

Thanks to you I can know the way to import coral from farms.. Thanks..very good information..~!!

I do plan on visiting my mom and family sometime this year. We can hook up and go eat. If you want my corals, you should talk to your lfs. Sometimes, they can get together with other shops and bring in a shipment.