So I just got released from the hospital. Dengue fever is no joke. There's a couple of interesting facts about the mosquito that spreads this virus. One of them is that the mosquitoes are a specific species that are active during the day. The ones at night, are harmless. As strange as it sounds, this particular mosquito thrives only near clean freshwater. It is not found in dirty stagnant pools usually associated with normal mosquitoes. A few people have died from this virus in Indonesia this year. Singapore had by far the largest outbreaks last year.

But let's get back to what we really like, corals. Here are some pictures of bubbletip anemones that I've exported in the past. Enjoy - Eddie. 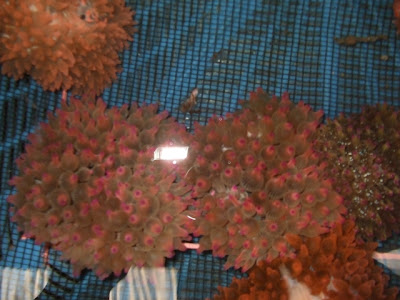 Only five specimens came in with this color morph out of three hundred pieces. The rest were all red - orange roses! 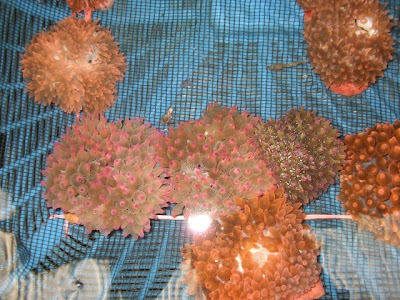 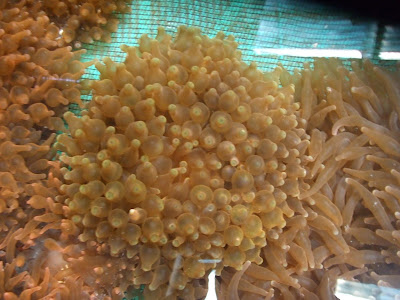 The orange bubble tips were insane! Strange enough, some of them had long tentacles instead of the traditional bubble tips. 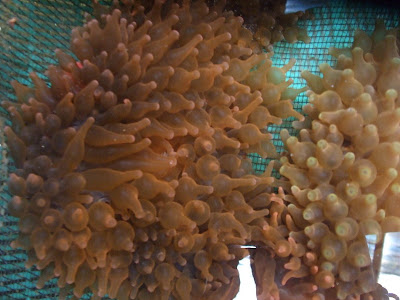 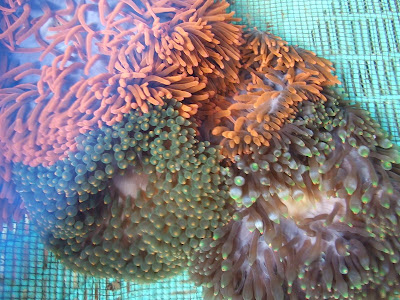 Some anemones from Sulawessi. The others were from Sumbawa.
Posted by Eddie H. at 2:47 AM

I do not know our LFS imports your corals and fishes. but if not I hope I will get your corals some day..~!!

Have a nice weekend...

Glad you made out OK with the fever. I just discovered your blog last week and I'm hooked. Thanks for documenting everything for us landlocked enthusiasts.

I don't export to Korea yet. But one day you will have my corals in your tank. Speaking of Korea, I sure could use some kimchee right about now! Where in Korea are you about?

Thanks for checking out my blog. Yah the fever got the best of me (hey sounds like a song), and I'm not talking disco ha! ha! The only good thing is that now I'm supposed to be very resistant to the virus. You say you're landlocked, don't worry I'll be your eyes and ears to the coral world, 10,000 miles away!

Hahahaaa...
Eddie is back... out to get you all blog readers...
I see it's picking up steam ...
Keep it up bro! Stay off the mosquitoes...
There's always the spray, dude

Thanks Eddie.
I was born in Seoul and after married I lived in Ansan(Gyonggi-Do)

Are you just born in korea or lived for a while? Do you know Korean? :)

Eddie, great blog you have going here! I'm addicted :) Is it possible to directly receive shipments from you as a hobbyist?

Yah it seems like people are discovering my blog now. I just have to keep it up and update.

Gyonggi do sounds familiar. I grew up in Gooy -dong. Actually I came from the country side and my family moved there when I was 4. I can talk baby Korean, that's about it. I can uderstand simple conversation but not like the news or anything. If you and your friends can get together and take 20 boxes, then yah I can send to you direct with cites. But this may be hard for hobbyists.

How do you go about setting something up to receive your picks? I remember handpicking stuff up in Fiji and watching out for the evil "day" skeeters. I got killed at night, but was thankful not to have caught dengue - especially since it was heavy season when I was there. Killer blog.

Do you have a store or are you a hobbyist? This way I can direct you to the right direction. That is cool that you were able to pick corals in Fiji. I ran a Tonga station for a while and visited Fiji as well.

Both. Yeah, was fortunate to shoot some underwater video out there and was able to pick a few nice pieces.

Any pointers on how to get your wife to agree on collection? I have been trying for years with no avail!

You can contact my two distributors in the SF area. Here are their info:

As for your wife, I just got lucky I found one that likes to play with corals. You can always try wine and dine, tell her it will be like going to Hawaii, except cheaper!

Any other places I can pick your stuff up or do it direct? The places you gave me don't seem interested in returning emails. Thanks.

PS - Quit snapping all these pics...im drooling way too much!

Sorry to hear that the guys are not responding to you. What city are you in?

No worries...I am in the Chicagoland area.