The "farms" in Banuwangi are just ordinary houses that have been converted to a holding facility. They usually are small operations, but move a lot of coral everyday. The first of the suppliers are only five minutes from the port. These farms are all located near the water for easy fresh seawater access. 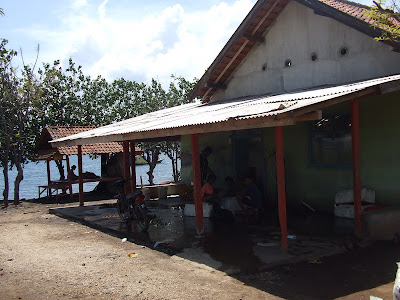 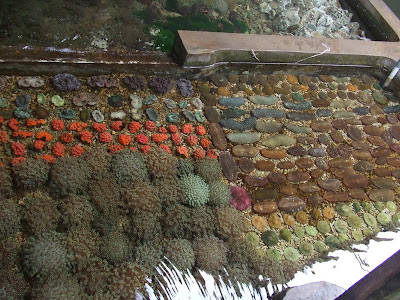 Typical selection of corals at these farms. Notice the over abundance of brown corals. This is what they send if you simply order. All of these are heading out to Jakarta, Surabaya, and Bali exporters. This is exactly the reason why I go and hand select. 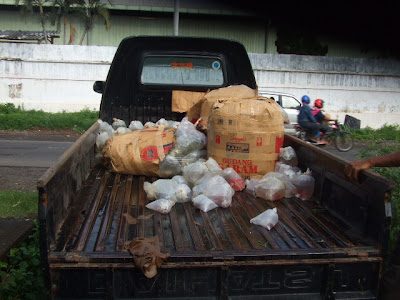 Many of the corals arrive in back of pickups. This truck came all the way from Sumbawa. For your information, Sumbawa is the second island next to Bali. So if we go east, we hit Lombok, then Sumbawa. After Sumbawa is the island of the big monster lizard, Godzilla! Not really, only Komodo dragons live there. 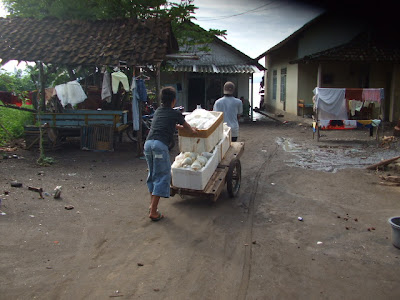 So some of the roads to the "farms" are too narrow for cars from the main road, so these little wheel barrows are used to haul the goods. Sometimes to get to the facility, we have to walk a 100 yards. 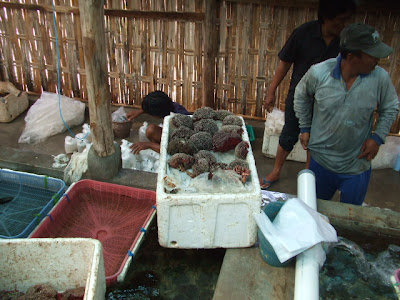 Some of the guys putting away corals. These corals were collected by local fishermen from local waters.

The following are some nice corals that I found on this trip. 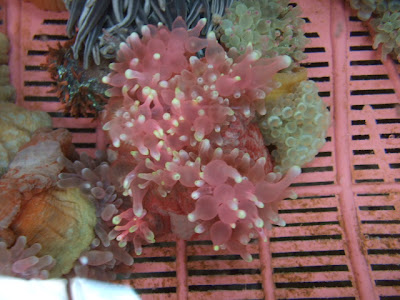 Ok for all of you bubble anemone fans, this must be like the holy grail! It was incredible. Natural pink color with yellowish white tips. the base was marbled pink color too. Definitely not a bleached anemone, but a very rare morph. Only had two pieces and of course I took them both! Just another beauty from Sumbawa islands. 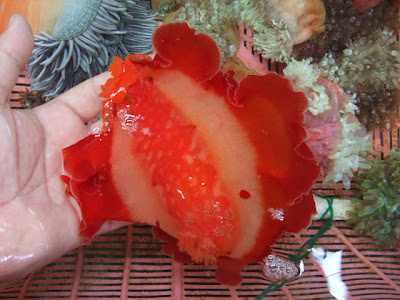 Striking nudibranch, also from Sumbawa. It looked like the Spanish dancer but different colors. Breath taking! 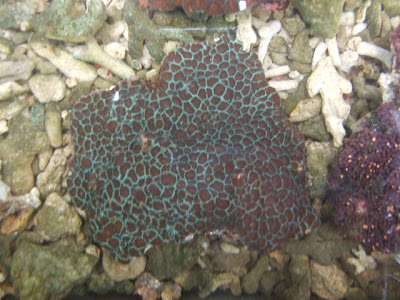 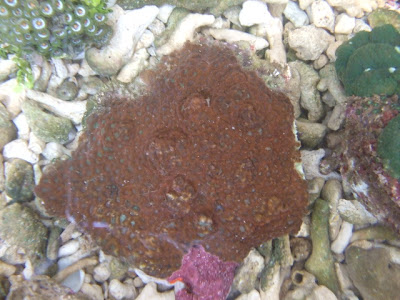 Sorry for the bad picture, but speaking of limited edition. Guess what this is? If you guessed favites pentagonia, then you are right! I believe it is a Steve Tyree limited edition piece, also called the original "war coral". It is metallic dark orange - red, a definite cherry piece. Don't get me wrong, just because you are looking at a ten inch piece doesn't mean it is common. A definite rare find. Finding pieces like this is what makes it all worth it! 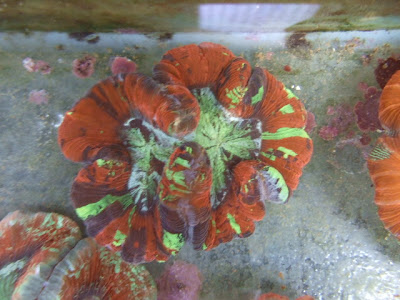 Check out this trachyphyllia! This is the famous red Bali brain. Common before, now hard to find. 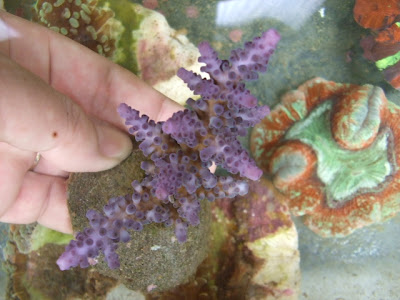 So before returning to Bali from Banuwangi, we stopped at the northern Bali aquaculture facilities. The corals that are grown here are a different varieties than the ones from Sarangan (Turtle Island). Here you find the deepwater acros being aquacultured. More on this area in part 3 of this road trip to Banuwangi (tomorrow's topic). But here is one coral that all sps keepers should have. This is probably an Acropora Gomezi, but is marketed as an echinata everywhere in the world. But we all know what the true echinata is! Nevertheless, it is a beautiful acro that can turn crazy colors under halides. It really does resemble the famous California tort.

Not to change the subject, but this Cali tort is my all time favorite sps. This is the coral that got me hooked into acros! This is a quick history of the coral that really is the "Ford of American Autos". It is the one sps that generated the interest in getting my customers into sps keeping. Back in early 2000, there were only 3 acros that were highly desired by the serious sps keepers. The famous Steve Tyree's Solitaryensis, his purple monster, and the blue tortuosa. They called it the blue tort because there were green ones just like it floating around the hobby. The problem was that all three were extremely rare and hard to find. Sure other nice corals were out there already, but not so famous because no one had named it yet.

Fortunate for me, one of my guys had a small colony that he grew from a frag and we would frag a piece for a good customer once in a while. But the big break came in when one of my customers started bringing in mounted and encrusted frags of this blue tort. He would bring them in and we would trade for other stuff. I can say he was one of the earlier true farmers. My sps cliental started to grow after my customer consistently brought these in. Not to mention he would bring in Soly frags as well! Way cool! Then one day, he asked me if I wanted to take over all of his corals. He had just another baby and not enough time to take care of his hobby. He also wanted to hand off his prized pieces to someone who could take care of them. I told him that I would give back a frag of everything later, when he was ready to get back into the hobby. After that he basically gave me all of his corals and I helped him break down his tank. I still have his Beckett skimmer somewhere, a tricky little thing.

He told me a quick history of the blue tort. So sometime in the mid 90's, a guy named Bob Mankin was into sps and he would bring in these nice aquacultured acros from the Solomon Islands. These were known as Solomon Island disks. I guess Bob would bring these in and sell them from his garage in the Bay area. One sps fish store at that time would promote these corals. The owner's name was Robert Dalton and he had a very nice shop in Danville. He was probably the only shop in the area that promoted sps. He even had a nice piece of the original Leng Sy cap. Anyways, my customer (his handle on RC was Shwebb) had bought two pieces of the tort and grew them to huge pieces. Then he would frag and grow those out and then start selling them online to a few individuals. One of the guys that first ended up with a piece was a guy named Shawn Bennett. Actually he was the one marketing it at that time after he grew his out. Of course it was called Shawn Bennett tort. I ended up putting the two tort colonies in my 4x4x2 quad random surge sps tank. It was a beautiful site. Most of my sps customers did end up with this tort in the end.

Interestingly one of my guys named Dave had actually two tort pieces when he came to join my team. One of them was a different color and slightly different in corallite detail. Actually both pieces were from Solomon Islands and Dave did get those pieces from Robert Dalton. The funny thing is that when the two pieces were next to each other, nobody paid attention to the Cali tort. The other tort was extraordinary. Only a few pieces of this was sold to very good customers. One of them was this guy named Erik, his handle on RC used to be agentsps. He was very good at detail and taking care of his corals. I once visited him and checked out his tank. Anyways, a little over a year ago, I opened up my shop again for a short period. A friend named Gresham, he works for Reed Mariculture, actually bought the original Dave's tort piece for me, as a present. Wow it was really cool! It had grown to a good size and Erik had sold it to Gresham. Oh I forgot to mention that after the few pieces of frags sold, the main piece got stolen! To top it off, my piece that was given to me died, while I was visiting my wife in Vietnam. After shortly, I closed up shop to come to Indonesia. But somebody still has an original piece of "Dave's tort" out there. One day, I will track down all of my old pieces. Sorry I got off the topic, but I thought I would share the "tort story". If someone would e-mail me a picture of the torts, I would post them on this blog. I don't have any pictures to share. You can e-mail me at my other e-mail address. spsextreme@yahoo.com - Thanks. Now back to some other "cherry corals". 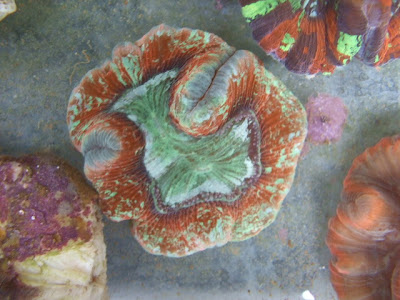 The Japanese would pay a grip for this, a multicolor Bali brain! 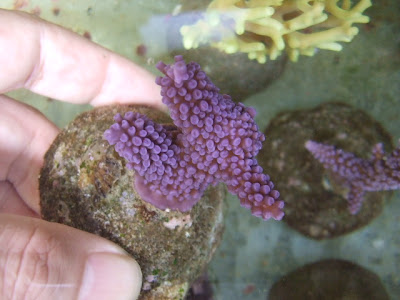 Another acro frag from Northern Bali. It is very purple, although the picture doesn't show. Another great piece of Bali aquaculture! 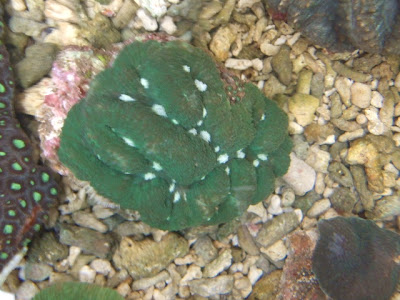 Check out this ultra green lobophyllia with white dots near the mouths!
Most intense green I ever seen on a lobo! 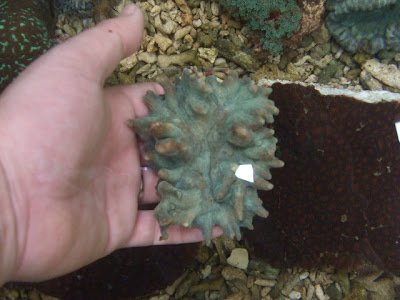 If you guessed pectinia, you got it! Very unusual lps with very nice color!
Posted by Eddie H. at 4:48 AM

eddie great story on the tort. its one our favorites too.

where will the pink BTA be going? Please let us know, i'd love to see how it reacts in captivity.

The funny thing is that I have never seen a wild piece of the tort looking like it is in our tanks. Which tells me that this coral morphed into the coral it is under artificial conditions of our aquariums.

One bubble tip got sent off to Taiwan. The other one is headed for England. I'll see if I could keep tabs on the anemone. If I was sending it to the US, it would be easy to track, but my England customer already has dibs.

Hi Eddie,
Love the blog. I visited your store when it reopened in 2006 and I was there the first day you were open, right around Thanksgiving. Anyway, I bought a piece of California tort from you that day. It came on a small round disk and was well encrusted. You only had the one frag. I don't know if this is Dave's tort because I don't remember seeing the parent colony in your tanks. But it is still alive and is the nicest coral in my tank. You're welcome to have a piece if you ever start up again.

Thanks for the offer. Since you're so nice, when the time comes, I'll trade you 10 of my limited edition pieces for a piece of the Cali tort! Thanks for following my blog.

Looks like you're spoilt for choice for LE corals the way your photos are looking! Do you know if any retailers in the US are selling them yet or how they're going to be distributed? Like you say, I'm looking forward to seeing how they'll look after a couple of months under halides.

I'll email you a pic of the tort one of these days.

The most likely the two shops that will carry my corals is Hunter from Lucky goldfish and Ming Wei from Atlantis. Rommel also buys from my distributor.