Hello everyone.  Today we are going to have some real fun, going to make artificial liverock!  Man made rock is crucial to the future of this industry.  After all, how long can we keep taking wild liverock from our reefs?  There must be a sustainability factor to keep our hobby going.

Years ago Anthony Calfo came out to Tonga to do some consulting work for me.  We talked about making artificial liverock at the time, even when we had quota for wild rock.  But I knew in the future wild rock quota would be taken away and I wanted to have something to replace.  Of course my predictions came true and few years ago, export of Tonga rock was banned.  And due to corrupt partners, I got screwed on my investments and hard work and never was able to fully work on any projects, including the  cultured liverock.  But things are different now as I have good partners and even have my own license to work with!

In my opinion four things need to be considered when making artificial rock: 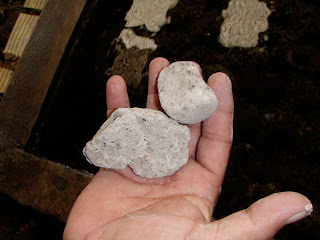 One of the hardest things to figure out is how to make the rock not so heavy.  The basic component of the man made rock is cement, and cement is heavy.  Something must be mixed in to make it light as possible.  Things like pasta, fruit, plant leaves, etc.. can be  mixed in and later to rot out in the ocean to eventually make it light.  I even used styrofoam particles once but ended up being too light and floated! - yikes!.  Anyways the best material to use are normally available on the beaches of islands.  These are volcanic lava rocks that are extremely light and porous.   They float on water and  get washed up on the shores of far away islands by the currents.  So since volcanic islands are common in the South Pacific, these rocks are normally readily available.  In the above picture I am holding two of these pieces.  This picture was taken during one of my adventures in Indonesia. 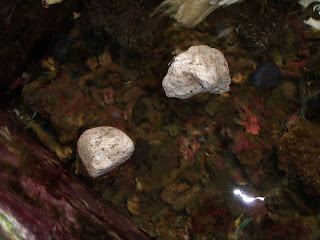 As you can see, they actually float! 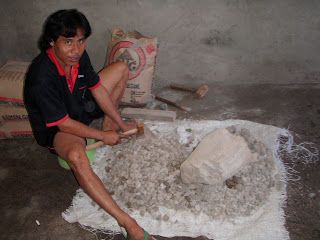 This Indo guy was chopping up the bigger pieces into smaller ones at one of my coral suppliers.  It looks like bags of cement are standing by to make artificial rock.  I never got to see samples of these liverock but I did see the ones made on Turtle Island Bali.  I looked for the pictures of those pieces but couldn't find it in my zillion picture database.  The rock was beautiful in color, solid purple coraline and everything.  But the rock was too heavy, the locals had used river stones to give it shape.  Also all the pieces had a flat bottom making them look unnatural.  But the main problem was that the rock was not able to be exported!

I got the full story and couldn't believe my ears.  After making tons of this rock and putting it into the ocean and taking care of it, the exporters that contracted out the local Balinese fishermen couldn't get permits to export the man made rock.  The reason was that although the rock was man made, it sat out in the ocean and things grew on it.  And these "things" need Cites to be exported.  So the exporters were told that the rock could be exported but under wild Cites for liverock.  Since the quota is very small for wild rock, there was no room for the man made stuff, customers of course chose natural over artificial.  So at the time, about 5 years ago, there were literally tons and tons of this rock sitting out in the ocean bottom.  I believe there must have been some sort of a misunderstanding with the government and the exporters. 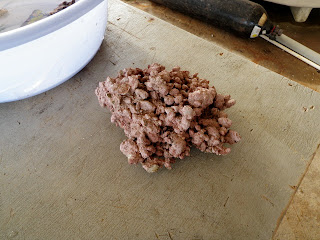 Anyways that was Indonesia, but we are in Tonga now.  For a fact we could get permits to export man made rock, but first got to make some!  The above rock was made some time ago but never ended up in the ocean.  Note the color is red.  A red cement dye was used to make the base color more appealing.  Evidently while I was journeying around in Indo, the South Pacific Commission (SPC) had come to Tonga to aid in making artificial rock.  They had come and worked with the Tongan Fisheries in conjunction with the exporters to encourage cultured rock for export.  Unfortunately after the training was done, no one ended up moving on with the project.

But I am back in Tonga and will start the aquaculuture liverock back up, along with a very special secret project that I've been wanting to do since the Indo days.  I'll let you know when the time is right on that! 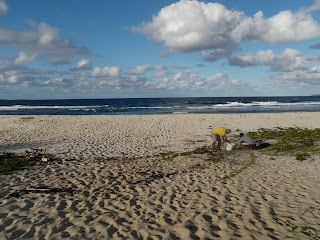 Ok so let's try to make liverock.  First thing we need are those volcanic stones.  We drove about an hour from town to get to the other side of the island to this beach to look for the volcanic lava pieces! 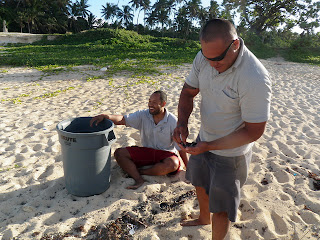 First it was a pain since the small stones were mixed in with the sand.  We had to sort through the huge amounts of sand to get the little buggers out! 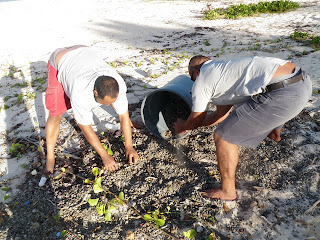 Then we hit jackpot!  We found patches some ways down the beach that were easy to pick up! 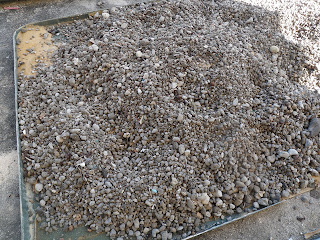 We brought back the stones to our facility at the Fisheries building.  We had collected a whole garbage can full! 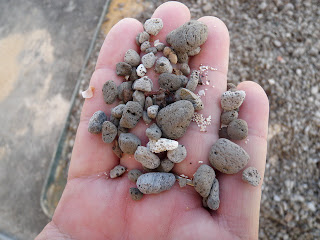 A close up of the volcanic rock pieces.  These are small but I heard on another beach we can find bigger ones.  No worries as we were anxious to try to make and see how it comes out anyways. 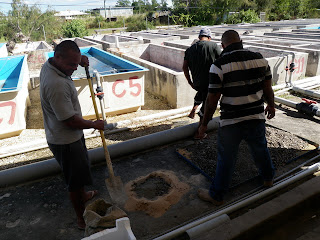 We  mixed up cement and sand from a quarry first. 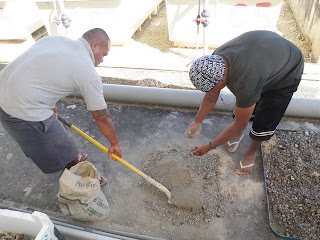 Getting the perfect mixture of sand and cement takes time to figure out.  This was our first time doing this so it was exciting.  The volcanic stones are thrown into the mix! 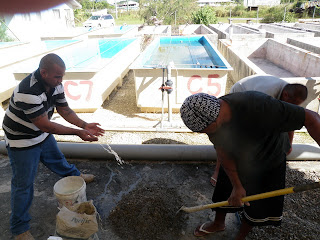 Finally water is added.  We didn't have a wheel barrow to mix the mixture, so it was harder to make the compound. 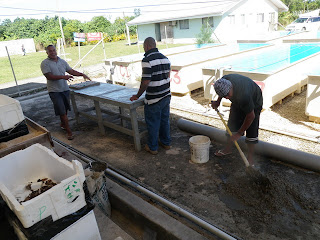 Here are the guys clearing a table to "make" the rock pieces! 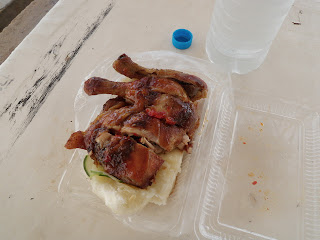 Then it was lunch time!  My favorite is barbecue chicken for $5 Tonga Paanga ($3 US).  You get the surprisingly tasty chicken with manioke (cassava) roots.  Other barbecue options include lamb and hot dogs - woo hoo! 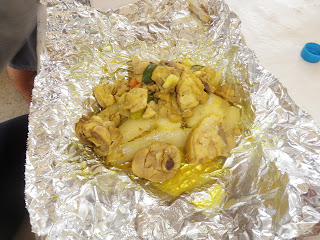 Another favorite food is curry chicken or lamb.  Tongans love curry and real cheap too, about $2.00 US. 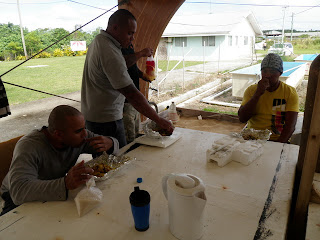 Time to take a break before the fun begins!

Ok guys that is it for today.  I will have the second part of this thread in the coming days.  I hope you like this topic as I feel it is one of the more important subjects that I have covered on my blog.  Until next time...

just blogwalking.. Nice post and have a nice day :)