A day out in the water!

Hello everybody, happy July 4th!  Just like here in the US, 4th of July is a big holiday in Tonga.  It is the birthday of King Taufa'ahau Tupou the 4th who passed away in 2006.  He was the King of Tonga for over 40 years.  My guys sent greetings as they spent the day on the beach roasting a pig and having a pic-nic.

And for today's topic, me and the boys go collecting corals! 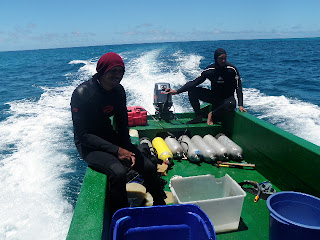 The day was perfect!  The ocean was calm and the sky blue.  Here is my right hand man Teau (driving the boat) and his sidekick Tau.  They are originally from my neck of woods, the San Francisco Bay Area.  Destiny has it that they ended up on a South Pacific Island diving for corals, a long way from East Palo Alto! 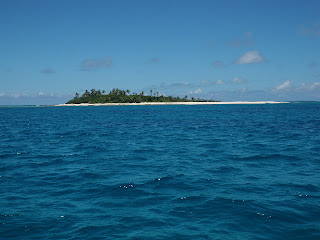 This beautiful little island is surrounded by beautiful corals!  This was our first stop.  I have close up pictures of this picturesque get-away island that I will share on another thread.  We made a promise to ourselves on this day that we would come and roast a pig and have a pic-nic on this island before I left - and we did - going to be an awesome write up! 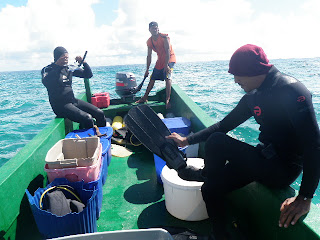 We anchored and Teau and Tau getting ready to go look for the goods!  The guy manning the engine is our boat man Sione.  His main job is to secure the boat, help with diving gear, and putting away the corals into those bins you see.  Sometimes he will pull the anchor and follow the guys, watching the bubbles. 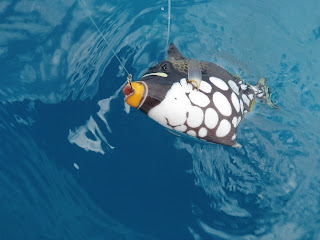 My favorite thing to do (if not snorkeling goofing off) while waiting for the guys to collect the corals, is to do some fishing!  I was shocked when I hooked into this clown trigger, gave me a good fight for a little fella.  I love this fish to death and it brought good old memories when I first got into the hobby.  Like many others, I got hooked on keep saltwater aquariums starting with triggers - and the clown trigger was my favorite! 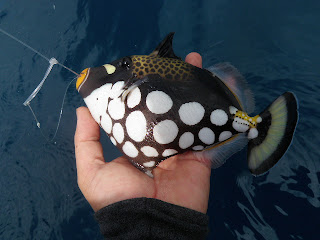 My excitement turned into concern when I noticed the belly was bloated.  Due to rapid rise to the surface, the fish was unable to decompress! 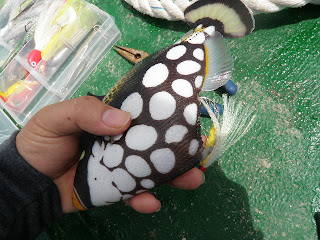 Quick thinking on my part, I grabbed a fly and bent down the barb and stuck it into the bottom of the trigger.
After the hook broke the bloated air bladder, I was able to squeeze out the excess air.  He swam down as soon as I put him back into the water, think he will be ok.  Well that was an experience, catching and releasing a clown trigger with a hook and line - never a dull moment when you are out in the water! 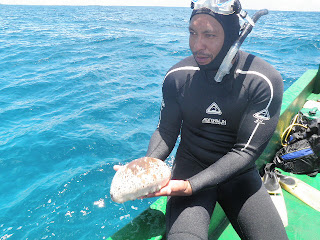 The first to come up was Teau.  Along with corals, he had found a highly prized sea cucumber.  This species of pech de mer is the most sought after of the holothurians in Tonga.  It is found relatively deep so difficult to obtain.  In the recent years, the Tongan Fisheries has allowed export of these highly sought after delicacies.  They are gutted, cooked, and dried before being packed for export.  Most of these end up in the Asian market, so it is not surprising that most people doing this business are Asians.  A special license is required and when it is in season, the whole island fisher folks are busy collecting and selling to the processors/exporters.  I remember once, the price of local lobsters had sky rocketed due to the scarcity, simply because everyone was looking for sea cucumbers instead! 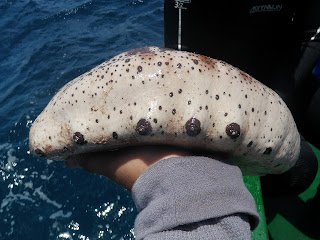 The local name of this sea cucumber translates to eight teats or nipples.  There are four of these nipples on each side of the giant hard slug.  This particular specimen would fetch around $50 US when sold to an exporter.  So as a diver, if you can find ten of these in a day, well you are doing very good! 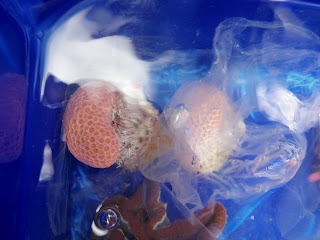 Some corals that were collected.  Red or even pink gonioporas are not common, but the divers do find them from time to time. 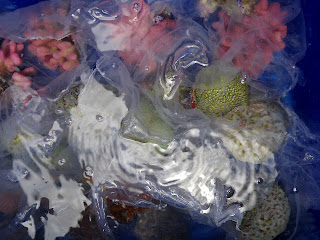 Sorry for the blurred picture, but at least you can make out the nice stylophoras! 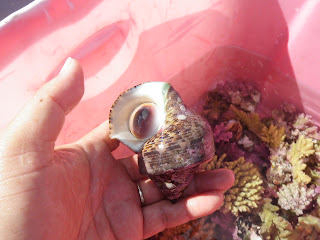 This big turbo snail makes a nice snack!  I have looked all over the place for small ones to export, but can't find none.  All of them are near this size, like I said before, everything is big in Tonga! 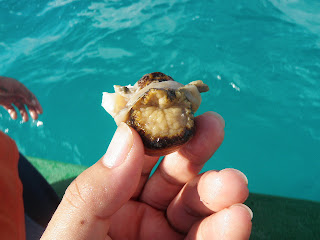 So here is the turbo snail without the shell, ready to be eaten raw.  Some tobasco sauce on this baby would be delicious! 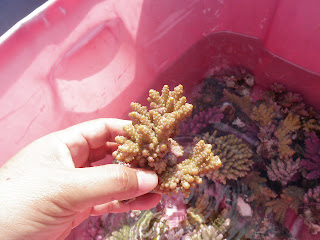 A bin full of acros just collected.  The sun makes it difficult for any colors to show up.  This small acropora I'm holding is a green sarmentosa with orange tips!  The acros from this collection bin will be transferred to other holding containers, each wrapped in plastic to minimize damage. 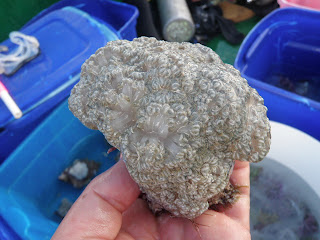 Tongan xenias are hard to ship.  These are not the same weed like growing ones in our aquariums that refuse to die.  Generally we can only ship small pieces in big bags of water and oxygen, thus making the landed cost very high.  Still customers do order them and they are beautiful when fully opened! 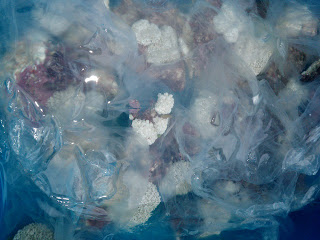 A bin full of xenias.  Half of them will melt within a few days and only the super healthy ones will be exported. Normally I try to avoid these sensitive soft corals but some customers really want them and willing to take the risk! 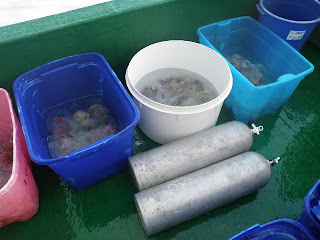 With all of our bins filled with corals, it is time to head back in! 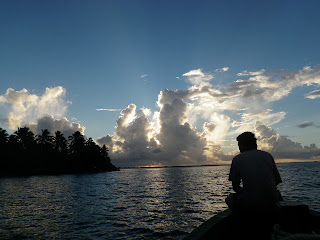 The sun was setting as we pushed toward home! 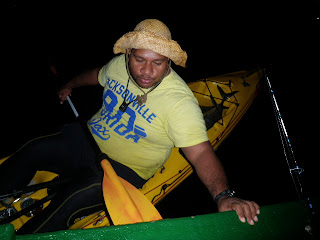 Right when we got to the wharf this guy was on a kayak tossing out lures.  We stopped to talk to him for a minute as I was very curious to see what he was after! 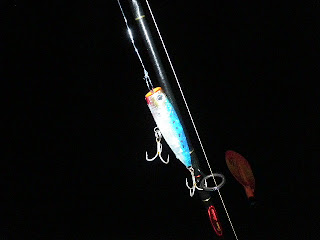 He was using this topwater popper near the wharf where street lights were shining onto the water.  He explained that the small baitfish would get attracted to the light and the bigger fish come looking for them -wow! 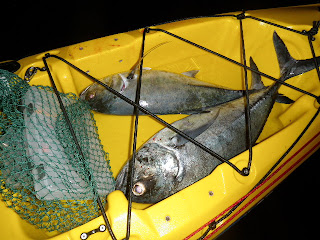 And dang, he already had two GT's (giant trevallies)!  I learned that monster fish lurk in the area and love top water plugs.  The only thing I can think of was to make sure to bring my striped bass surf plugging gear next time!  Got my blood pumping as fishing is my number one hobby, then comes corals - ha! ha!

Ok guys that is it for today.  As I type this, I can hear fireworks still outside.  As promised I will be updating with more adventures in the coming days, so please stay tuned.

Oh and I forgot to mention that during my last trip to Tonga, I worked on a secret project that is going to positively shake up the industry!  I will share this with you when the time is right:)

That's awesome sea cucumber is a delicacy in some parts of Asia and the pacific, this creature lives in sea bottom and beside corals.

just blogwalking.. Nice post and have a nice day :)

Thanks for supporting your time to post such an interesting & useful content.Thank you so much, I appreciate your work.
Multibagger Option Tips