Hello everyone. It has been a long time since I have posted, I apologize. Lots of things have happened in my personal life that have greatly impacted my ambitions and goals. Earlier this year, my elderly Aunt/Mother that raised me since I was 7 had a stroke. My plans of going overseas and working had to be put on hold. These days I am busy taking care of her as she has not recovered. Besides that, my wife is pregnant! I am going to be a dad in mid January.
As for business wise, I managed to get my own export license for coral from Tonga earlier this year. This was a dream come true as I had been screwed out of lots of money and time from really bad business partners. I was forced to work with them due to the fact that they had a license. Now things are different and I have total control over things.
Currently I am looking for customers in Vancouver Canada, Asia, Los Angeles and San Francisco.
There are convenient flights via Aukland from Tonga to these destinations. If you are a wholesaler or a distributor and would like to import my corals, please contact me at joylucktp2000@yahoo.com.
One of the "coolest" thing for me to do is to check out the local fish markets when I'm in a new country. Not only will I encounter the strangest things but also fish that are commonly found in the aquarium trade. I keep forgetting that many of the fish we keep in our fish tanks are actually food fish in their native waters. Below are some pictures from the local fish market in Nukualofa (the capital) of the Kingdom of Tonga! 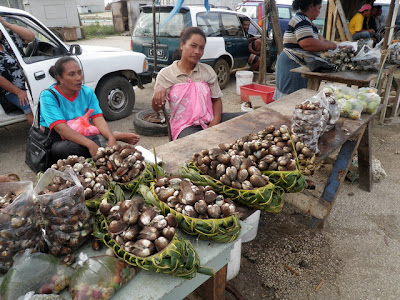 Depending on what time of the day it is, different products will be available. For example, in the morning, fish and stuff will be available that were caught the night before spearfishing. Night spearfishing is very popular and productive, particularly because the fish are sleeping and easily to spot. You do need a powerful underwater flashlight to hunt at night though. In the above photo, vendors are selling cockle clams. Actually my divers know where to find these, in the sand in about 15 feet of water. 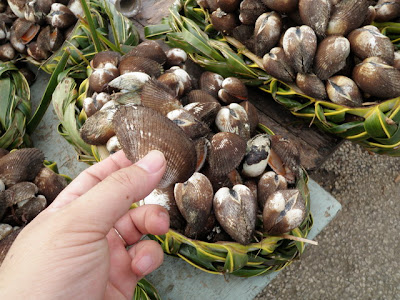 These cockles are quite large and if you know how to cook them, it would taste great. 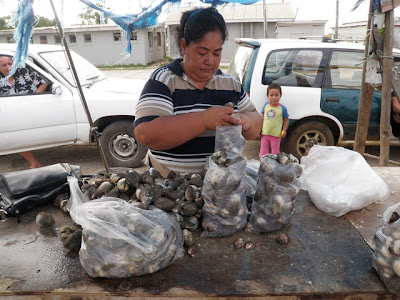 I bought one of these bag fulls and boiled them, tasted kind of fishy and hard as leather! 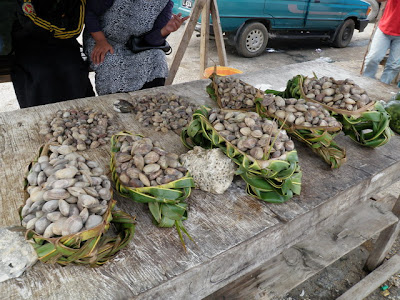 Now these "Manila" type of clams were pretty good boiled, with some soy sauce! One of my favorite foods to eat when I go to Chinese restaurants is "clams with black bean sauce" - unbelievably delicious in HK restaurants! 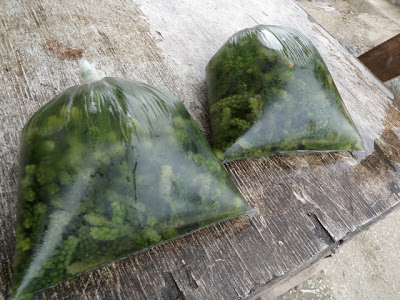 Not too surprised to see caulerpa being sold at a tropical fish market. There is a famous Tongan food dish made from these edible sea veggies. I have seen locals harvesting them in the raceways at the Fisheries clam farm. 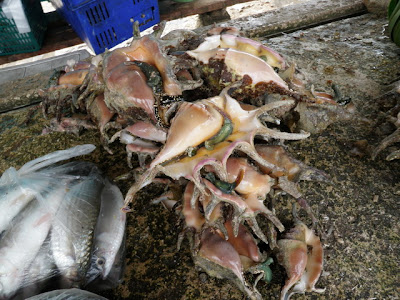 When the tide goes out on the reefs, locals are searching for mainly two things, octopus and these conchs. I have tasted these sweet, tender meaty things raw while collecting corals with my divers - yummy! 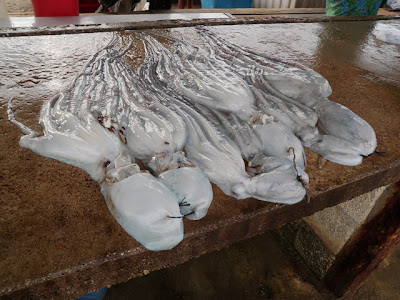 Octopus is a staple at the fish market, they are always available and high in demand! 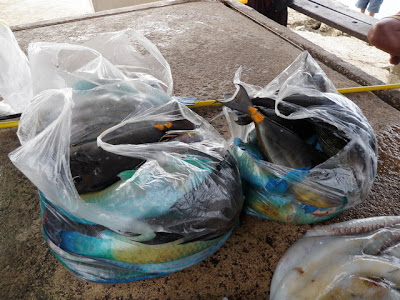 For sure last night's catch. Looks like a bag full of naso tangs and parrot fish! 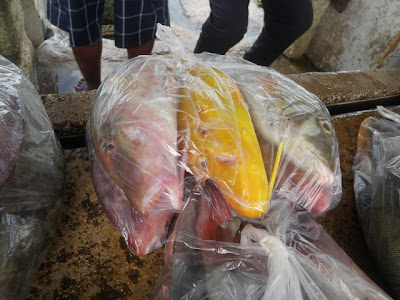 The fish on the right in the bag is a snapper or a grunt of some sort. The others including the bright yellow one are goatfish. Goatfish are one of the best tasting reef fish there is! My Filipino fish divers used to make great soup from these tasty little guys. Even just fried with some salt yields a great meal with rice! 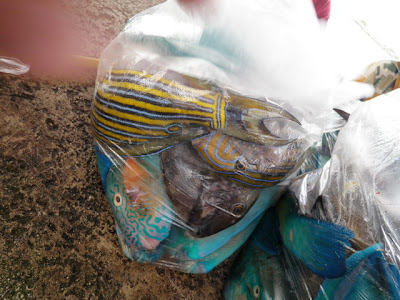 Another fish we are familiar with in our trade, the clown tang! 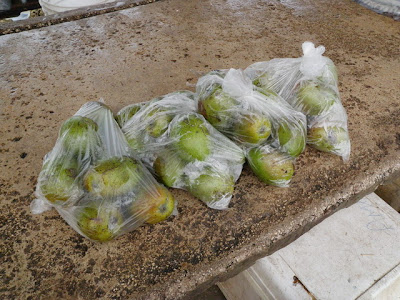 The time of the year was in the Fall and the mangos were starting to show up. The first ones are from other islands and quite expensive. But as the season goes on, mangos are everywhere. Price drops like a rock and I used to buy a bag full (about 30) for $2 US and take them as snacks when we go collect corals. The sweet taste is really refreshing after swimming around in salt water. We use our teeth to peel the skin off and eat like apples! 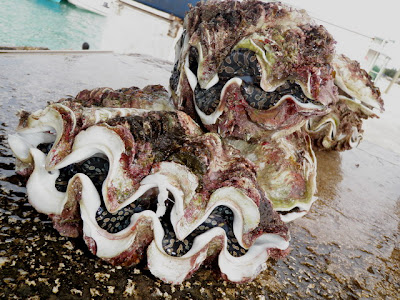 Maxima clams are available from time to time. For sure they are harder to find locally. These I'm sure were found some miles out in more remote areas. Years ago, I used to see maximas, squamosas, and derasas on the tables for sale all the time. Practically everyday they were available. But on this trip, I only saw maximas two times and not in many numbers. So for sure these valuable invertebrates are being overfished. Good thing there are still plenty healthy populations of giant wild clams in the other two major island groups of Tonga. Tonga is made up of three big islands, Tongatapu is where the capital is, Vavau a volcanic island, and Haapai an atoll. Recently a trip was made by the government Fisheries to collect brood stock of giant clams from Haapai for spawning. They came back with great specimens, including a giant blue squamosa! I'll post pictures of the magnificent beast in a later thread. 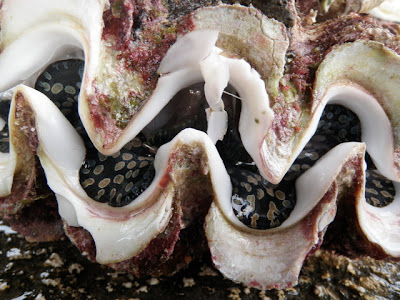 A close up shot of the maxima shows that it is black with gold teardrops. Once I found a turquoise teardrop, drop dead gorgeous about 15 inches in the similar condition as this one sitting on the market table. I quickly bought it for $5 US and brought it to the fisheries clam facility. I left it in the raceways and prayed that night that it would live. I was planning on using it as a broodstock (at that time I was heavily involved with spawning clams). But unfortunately it was gaping and dying by morning. I let one of the workers take it home for dinner:( 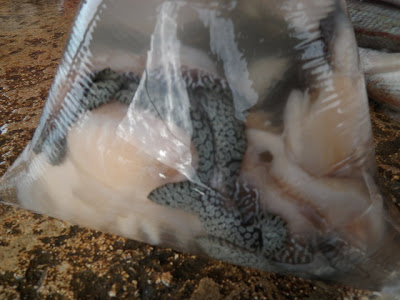 There were some clams that had already been cut opened and the meat for sale in plastic bags. There is a very popular food dish that the locals make out of raw clam meat and coconut milk. It tastes really fishy and nasty, nothing like the conchs, but the locals love it! 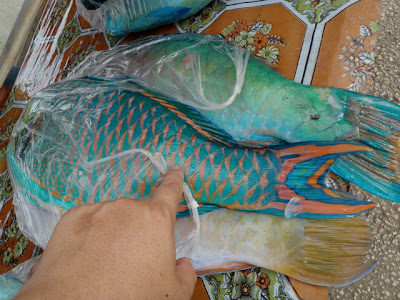 Parrot fish are common catches during night spear fishing ventures. I have spear fished many times with my divers in the shallow reefs and it is really a cool experience! 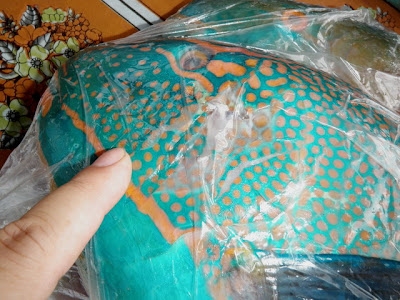 A close up shot of the head of a parrotfish. The markings are beautiful!
Conclusion
Ok guys that is it for today. I hope you have enjoyed the topic. I will post again in a few days with some other exciting adventures from Tonga.
Cheers,
Eddie
Posted by Eddie H. at 5:34 PM

So stoked you are back!

Love reading your blog regularly, congrat soon to be a Dad.

Awesome to see you back Eddie.

I'd say get as much sleep as you can before the lil bub arrives.

All the best.
Lyndon