Hello everyone. After spending time sorting corals at the fisheries, I decided to take a walk out to the beach at low tide behind the pump house. I wanted to see if I could locate the water intake pipe.
And just for your info, my friend has set up a fan page on Facebook for me. Come on and join me, I would like to see how many people are following my posts. My friend also changed the layout of my blog, looks different and more modern now - hope you guys like it- thanks Ferry! 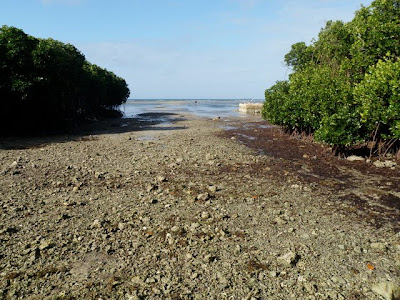 The tide was going out and the mangrove roots were starting to be exposed. 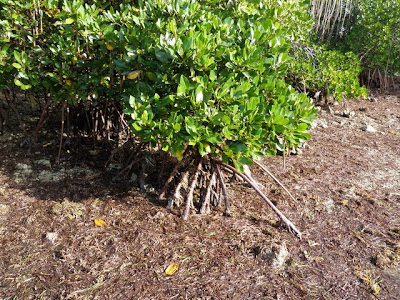 Little mudskippers and fiddler crabs were dodging in and out. I tried to catch them but they were too fast! The roots of the mangroves are a haven to many small animals. 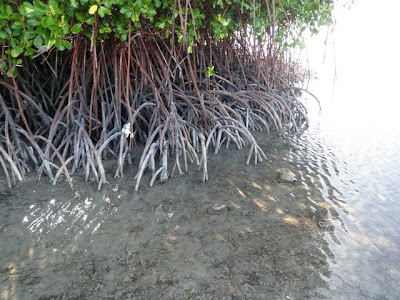 All kinds of little fish were darting in and out as well. I heard that big mud crabs can be caught in this exact location. I looked for some traps, but didn't find any. 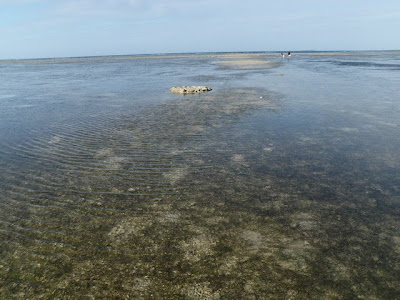 The tide was still going out. 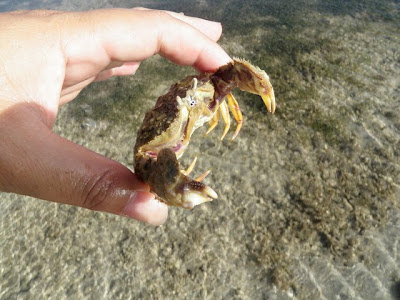 Caught this little crab running about! 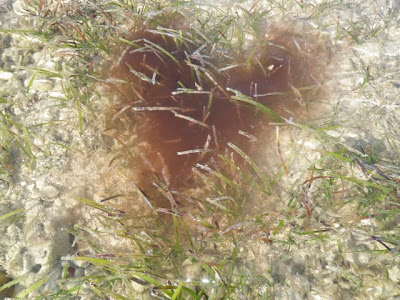 Some black ink shot out among the seagrass as I was walking. It could either be an octopus or a sea hare. 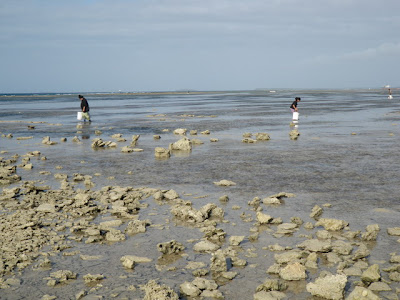 About 100 yards out, the locals were collecting something. 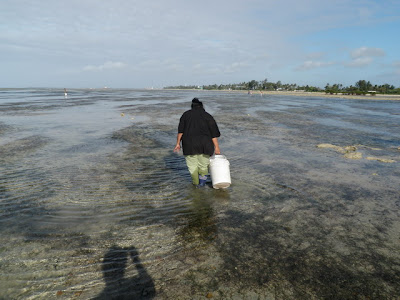 I followed one lady to see what was in the bucket! 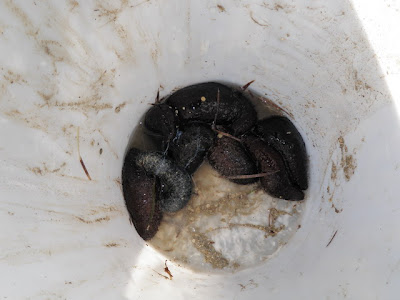 Just as I suspected, sea cucumbers. These small black turds are not worth much, but at least they are readily available. The deeper more valuable ones have been picked through. 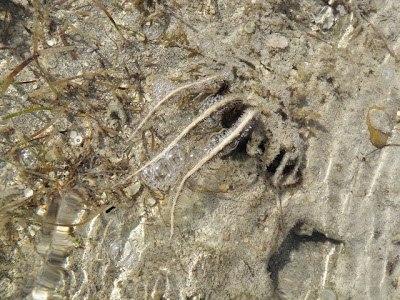 Lots of brittle stars were roaming about! 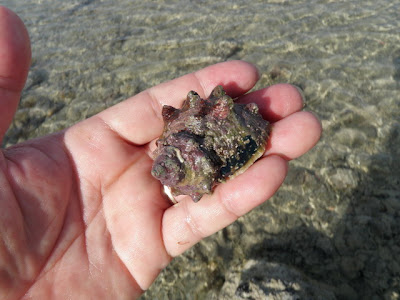 A turbo looking snail. Even this size is considered small in Tonga! 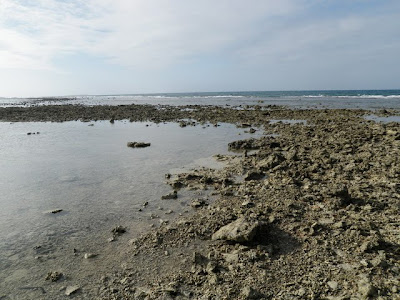 I was getting closer to the edge of the barrier reef. 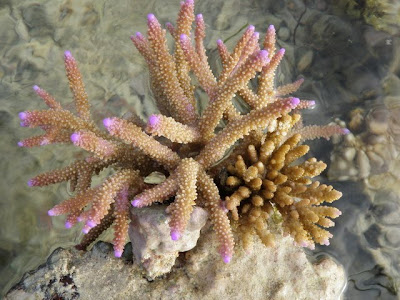 About 10 yards before the breakers, I found corals in the shallows! 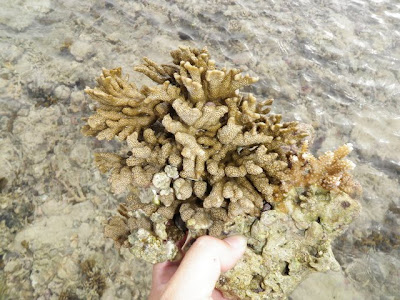 This Montipora digitata had orange polyps! 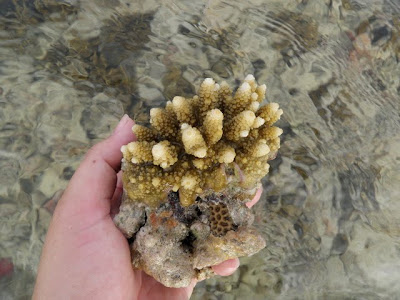 Typical of very shallow water acros, some of these species get exposed during low tides and can survive. This chubby short branched acropora looked like a humilus or a samoensis. 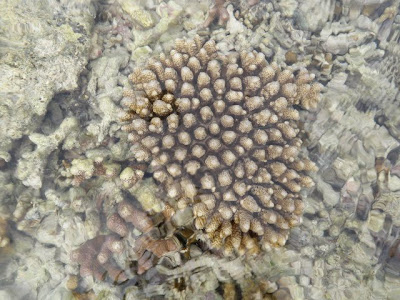 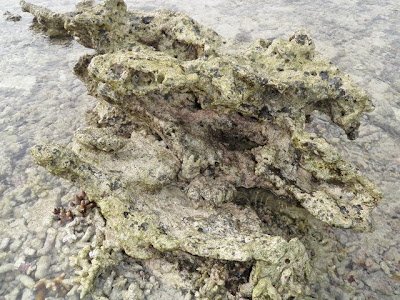 A huge beautiful piece of liverock! Great shape, but unfortunately no coralline. 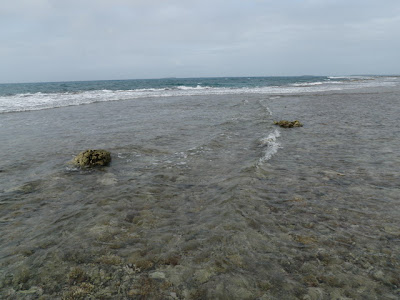 So finally I got out to the edge of the barrier reef and discovered all kinds of corals! 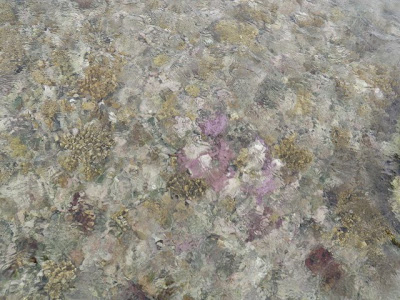 Here is a closer shot of the area. 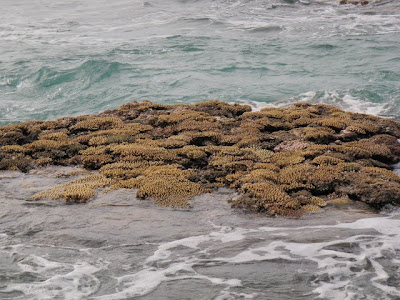 These acros must be tough. Not only do they have to deal with the hot sun, but also the constant pounding from the waves! For those of you who never witnessed corals growing in the wild like this, it is truly amazing. I saw photos like this in books and magazines, and then saw the real deal in life, I was shocked by the total beauty of it! 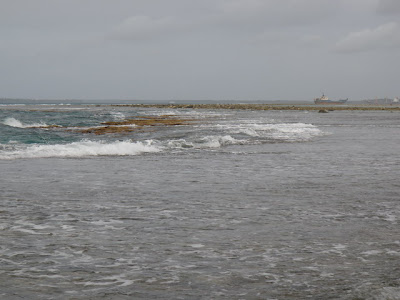 You can see the water color being darker left side of the rocks (corals). This is where the barrier reef stops and drops off real deep. 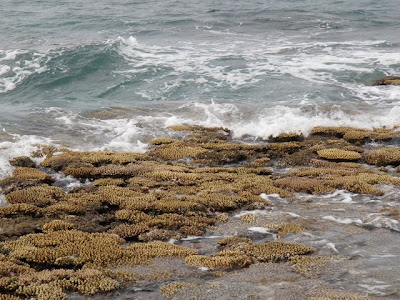 The drop off is pretty steep. Years ago, we used to collect crazy chalice, lobos and symphyllias in this area. I once saw a turtle and a clown trigger once while snorkeling here. We pulled up about 5 yards from the waves and anchored. My guys went down to collect chalice and lobos while I snorkeled around at the top. I was amazed by a clown trigger and didn't realize the current was taking me into the rocks (corals). I got slammed into the corals and holy crap! Drank some Tongan seawater and swam out to deeper water. A turtle saw me and ran off!
Conclusion
Ok guys that is it for today. I have more pictures and stories to share with you from this day, so stay tuned. One thing that was kind of strange was that there was virtually no coralline algae growing anywhere in this section of the island.
Oh, and I never did find the intake pipe. It must be have been way out there and deep down!
Cheers,
Eddie
Posted by Eddie H. at 10:47 PM

You are good I to want to order the coral.
Please give me the quotation.
email:jamison90132@gmail.com
or give me msn
thanks.
jamison

The corals are so lovely. I've never hold anything like that in the hand. I think they are spiky. And they say you can get something from them. I'm not sure what they mean by this something.