Hi everyone. So let's continue on to day 11 of my "Tonga adventures". 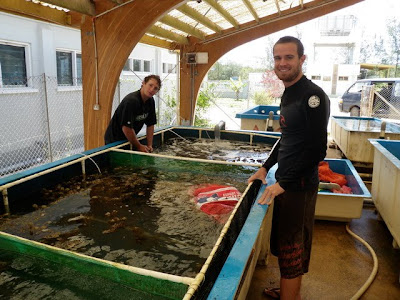 Computer work and such kept me in the "office" for most of the day. I got to the fisheries facility a little later in the afternoon. These two cool dudes are from AusAid, an Australian government agency that helps developing countries worldwide. In Tonga, AusAid provides funding and consultation to the Fisheries department as an ongoing support to help with various projects. Right before I left, these guys were gearing up to make a "road trip" to Ha'apai to collect clam broodstock. Man, I wish I could have stayed longer, would have loved to tag along and share the adventures with you. Anyways, I got to the facility and these two down under dudes (duds), had just come back from harvesting sea weed for their study subjects, the sea urchins. The guys were studying growth rates of the echinoderms. 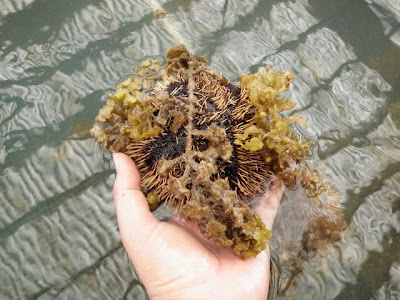 Here is one urchin and in the Japanese sushi world, this guy would be worth a lot of money. The eggs inside is a delicacy. I have eaten the eggs before and it taste like dirt! I guess it is an acquired taste and I am not fined tuned enough for it - where is the can of mackerl! 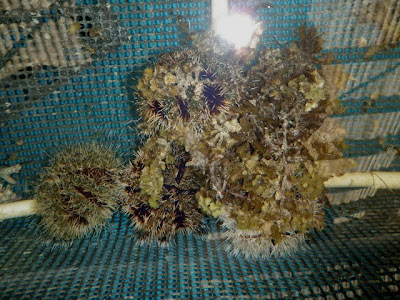 The hungry urchins were devouring the sea weed! 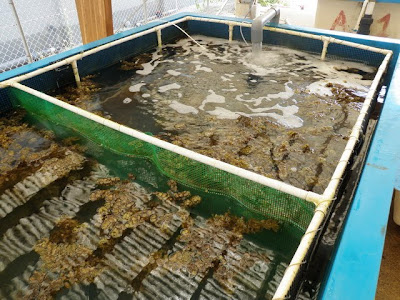 A custom made enclosure just for the round spiky guys. The water entering the tank is natural sea water being pumped in from at least a hundred yards out. 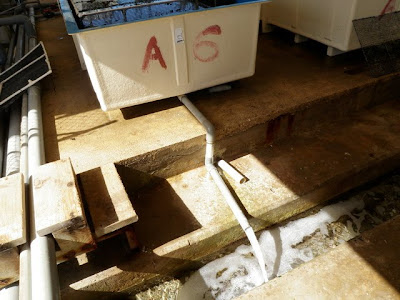 Here is the water being drained into the raceway gutters. 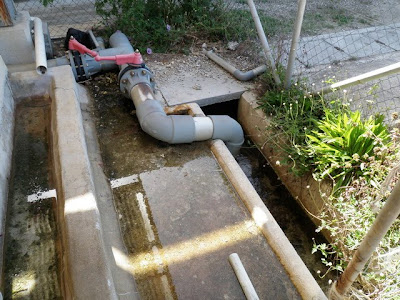 I followed the raceway to this point, then it disappeared under the street. 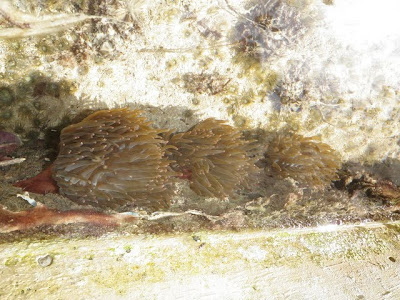 Three very happy rose anemones minding their own business in the raceway! Everyone in the raceway is happy. Corals stop dying, even recover once put into the fast current. This reinforces how important it is to have the good flow in our reef aquariums. I am going to monitor these three roses every time I go back to Tonga! 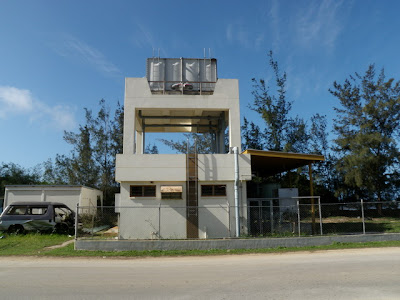 The raceway drain runs under the street and runs along the pump house. That big reservoir at the top of the building is where the water is being pumped into. From there, it gravity feeds down into the tanks at the facility. The water to the tanks are controlled by numerous valves. To the right of the building are sand filters, but not being used. I guess it is better without these filters in this situation. It allows lots of plankton to enter the clam and coral tanks. 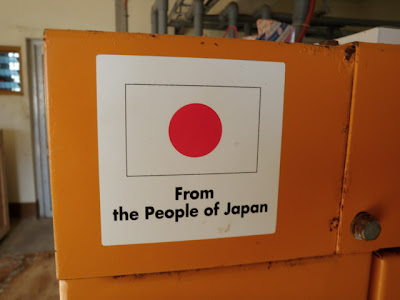 This multi million dollar facility was set up by the Japanese a long time ago. They set it up and trained the locals on clam farming and left. It was a gift, kind of like what the AusAid is doing now. 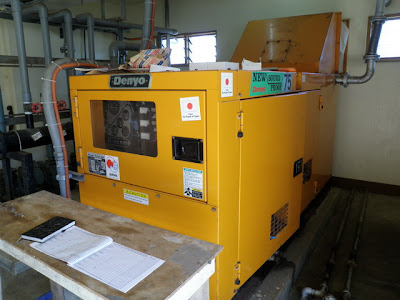 This thing looked like a back up generator, fairly new too! 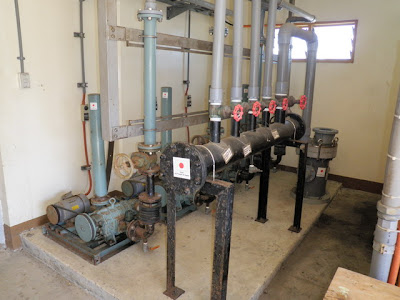 These pumps and valves looked liked it was for the sand filter system. The motors were not running. 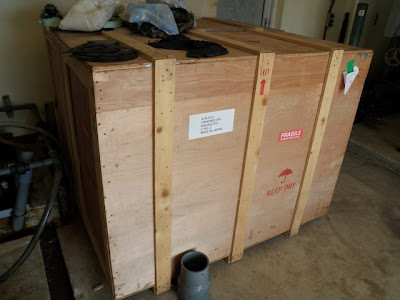 A big crate. Most likely some new equipment had arrived from Japan recently. 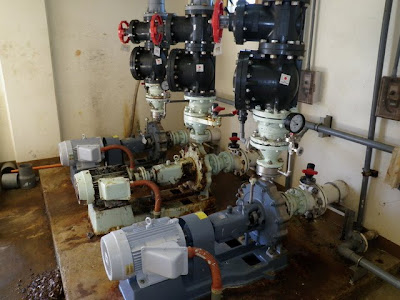 At current, two giant pumps were being used to pump water from the ocean to the reservoir up on the roof. The middle pump looked like it was being serviced. 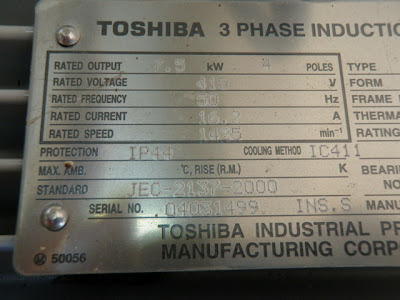 These monster Toshiba pumps looked to be pretty new. 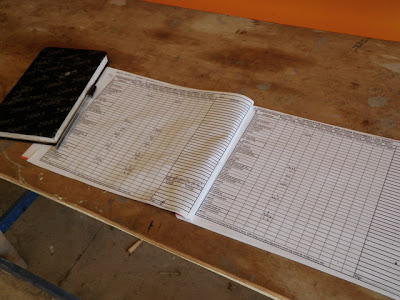 Good to see that things were being monitored! 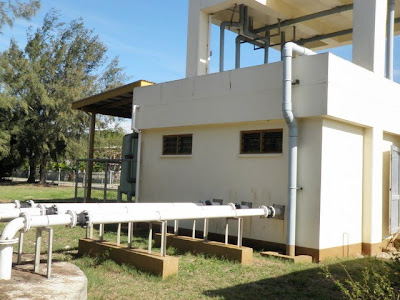 This is the back of the pump house. Note the three pipes for the three pumps. 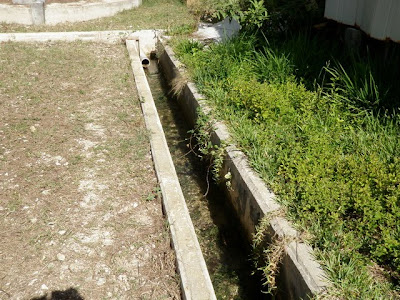 I went outside again and followed the raceway. 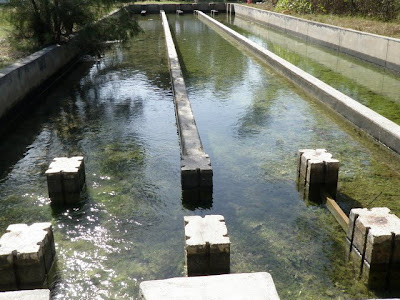 And it emptied into this settling area. I'm sure all kinds of cool things were living in here! 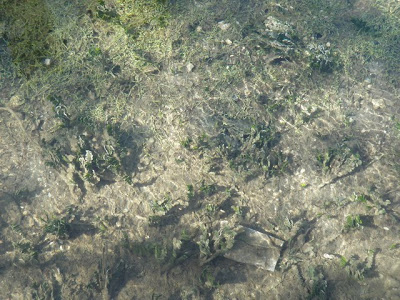 There were halimeda, the calcalreous algae growing at the bottom of the pond. 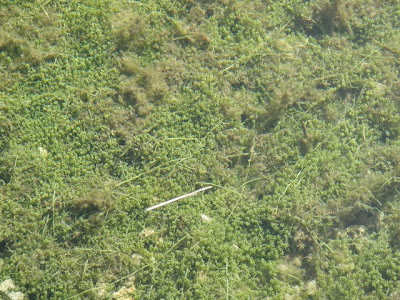 Also growing along with the halimeda, was a dense layer of Caulerpa racemosa. This "grape" algae is a local favorite food item, so I wouldn't be surprised if these were harvested regularly. 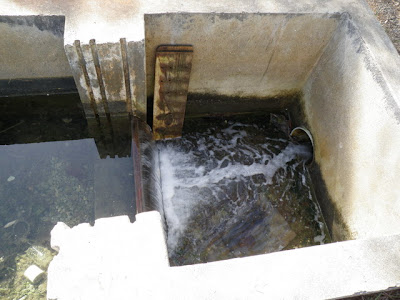 The water eventually drained on the other side of the pond into this corner. 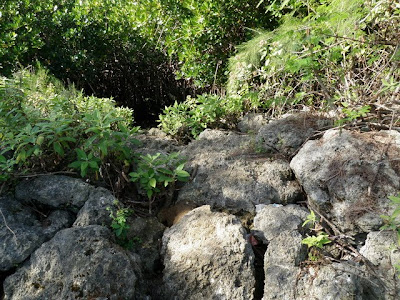 The drain pipe disappeared into the rocks. 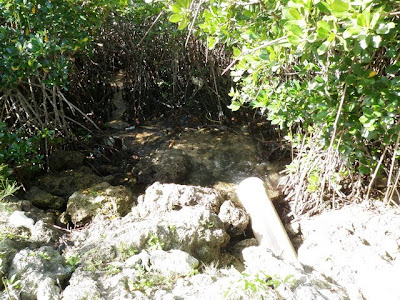 And reappeared on the other side! 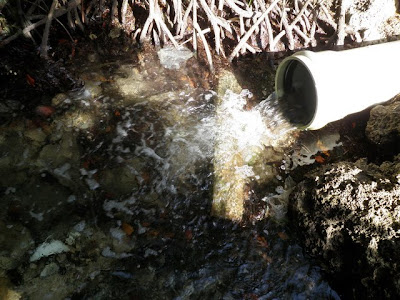 Here is a close up of the drain. I could see little crabs and all kinds of stuff running around at the bottom of this "waterfall". I guess it is a good place to hang out to catch or look for food. 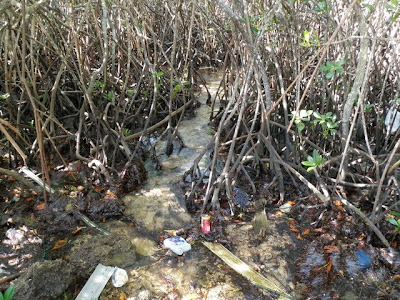 The water eventually disappeared into the mangroves and back out to the sea. 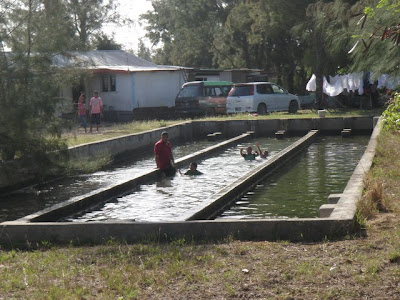 I walked around a bit and later found these local kids (the big guy is also a kid), playing in the settling pond!
Conclusion
Ok boys and girls, that is it for today. Uncle Eddie will tell you all about what he did the next day very soon:). All I can say is that the tide was out and I was having fun playing with sea shore animals!
Cheers,
Eddie
Posted by Eddie H. at 10:48 AM

You had a wonderful day, as I see. The pipes seem to be so old. The urchin is really very funny. It's not so bright and fluffy as usual ones, however.