Hello everyone. So I've been here in Vietnam for a week and I have to say that it's been really great! Not only do I get time to spend with my wife's family, I had the chance to visit one of the big coral and clam exporters. I will have photos and information on a later post. One really breaking news though. As of few days ago, the Vietnam Forestry has stopped all cites for clams. This means that after 6 months (shelf life on the cites), there will be no more clams from Vietnam! So all the exporters here have stocked up on these clam cites for their customers before the closure date. Sounds like Vietnam could use a clam farm soon. Wholesalers and distributors, if you want more details on this closure, please send me a private e-mail. Thanks.

For the most part me and my wife have been staying in Vinh Long, a province three hours south of Hochi Minh City (formerly known as Saigon). This is Vietnam’s heartland of rice patties. Because of the abundance of fresh water from the Mekong and very fertile soil, mix that with excellent weather and you can grow rice three times a year. I know Korea can only do once a year. Besides that, Vinh Long is nationally known for its great fruits! I will talk more about this later on another post.

So I’ve been going to town to check e-mail everyday. It is a 45 minute motorbike ride through a two lane highway. It really is a picturesque ride, but my butt is hurts like hell! It is one thing to ride a motorbike on your own and another to get a ride. Riding on your own does not hurt at all, but for some reason, sitting towards the back of the seat getting ridden, is a killer! My wife’s younger sister rides my wife and her younger brother gives me the ride.

Just my luck, a section on my keyboard on my laptop went out. Of course I forgot to bring my flashdisk and left it in Bali too. I just returned with a flashdisk from HCM and now I can work on this post. It will be a few days until laptop is ready, the keyboard had to be specially ordered. One thing that has changed since two years that I was here, is that most internet cafe's now have high speed! The exporter that I've visited has high speed, faster than Indonesia and only cost 200,000 dong a month! (about $12). Imagine that, such an undeveloped country with such an efficient and cheap internet service. For sure Indonesia has internal problems, as the high speed is not reliable and is very costly (about $80 US a month). Just so you know, Indonesia is 10 times more developed than Vietnam. Keep in mind that I'm uploading this post from a remote village in nowhere. The following pictures are from a trip to the fish market. I love going to these kind of places. You never know what you will end up seeing! 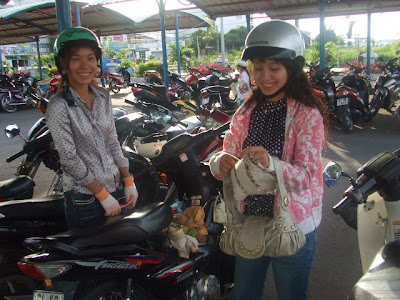 Here is my wife Anne with her sister Giang (pronounced Yang) at a parking lot of a recently opened supermarket in town. 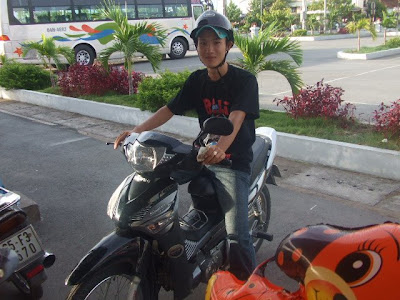 This is Kye, my wife’s younger brother. Check out the t-shirt he is wearing. You can make out the words “Bali”. 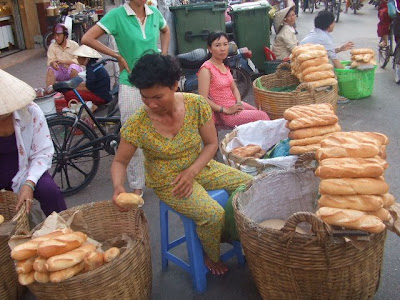 On the way into the market, these ladies were selling French bread. These are used to make the “Vietnamese sandwiches” . They open up the bread, and stuff barbecued meats and fermented vegetables and cilantros and other goodies. The bread tastes really good, soft and moist and fluffy. Tons of these are consumed everyday. Thanks to the French, this bread has become a staple in the Vietnamese diet. Along with the iced coffee, the French really left their trademark in Vietnam. Actually, you can see the French influence everywhere – especially if you are in the big city. Cities such as Da Lat and Hanoi are some of the prime areas where the French left their mark both architecturally and in the cuisines. 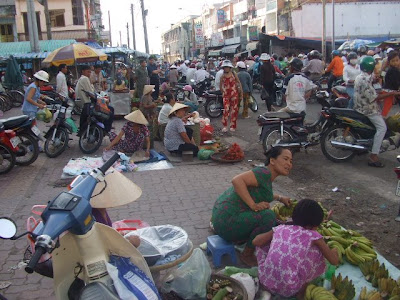 The market has different sections. First is the vegetable section and if you keep walking, you hit the fish market next to the river’s edge. Walk the opposite way, and you end up at the fruit market. Also, there is a building where you can buy cheap clothes, watches, boot legged DVD’s, shoes, etc.. 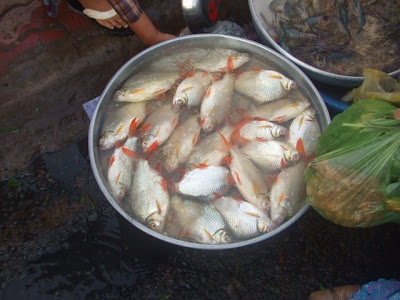 Hey now, these look familiar! I used keep these in freshwater tanks during my maintenance days. Of course these are tinfoil barbs. They keep these alive by keeping enough water to lay them sideways and the fish breath air. These are really pretty with bright orange fins and tails. I wonder how they taste? 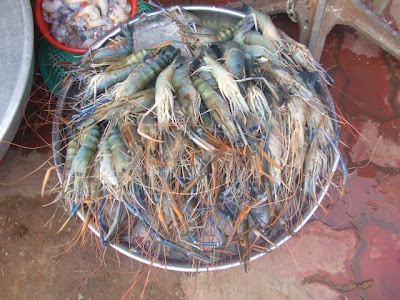 Freshwater prawns are abundant in Vietnam. There are huge farms that spawn and grow these tasty little (or rather large) buggers. I just read in the Bali newspaper that there is a huge shortage of these in Bali. The tourist restaurants can’t get enough of these for the menu. There is plenty here though and the pricing is much cheaper too. A kilo of live shrimps would cost 120,000 – 140,000 Indonesia rupiah. The same live ones here in Vietnam would cost 100,000 – 120,000 dong a kilo. But consider if you exchange one dollar in Indonesia, it would get you around 9000 rupiah. Here in Vietnam, you can get 17,000 dong! A dollar can get you a long way here in Vietnam. If I was old and only had a little money saved up, I would retire in here. At least I would be able to live comfortably. 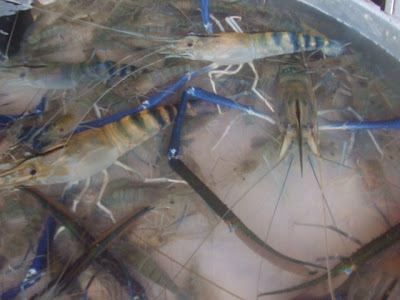 Here is a picture of some live ones! These are Macrobrachium sp. 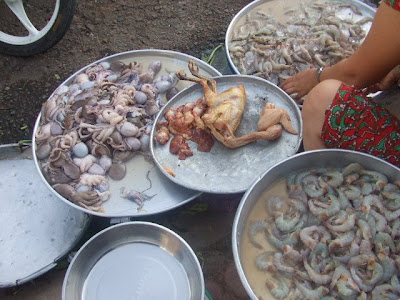 A lady selling shrimp and octopus, with a dead chicken in the center! Still, when I see a dead chicken at the market, I always wonder if it was alive before and killed for the sale, or maybe perhaps it had died of bird flu! 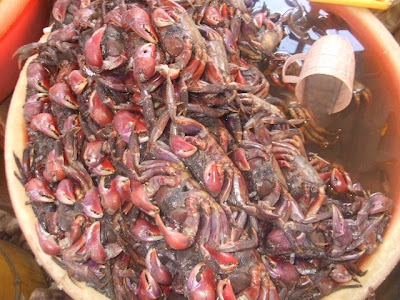 Some pickled Mangrove crabs anyone? My wife likes it, but told me it would make me sick! 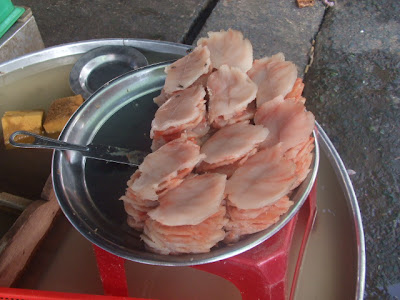 These are raw fish cakes. Basically the meat is scraped off of the fish and made into these flat Swedish pancake sized pieces. You can fry them or bake them or whatever. Sometimes they are rolled into small golf ball sized pieces and sold as fish balls! 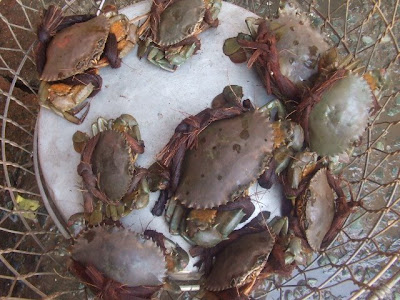 I’ve had the best mudcrabs in Vietnam. The females always cost more than the males. Be aware of the large males with the huge claws. When you cook them, there is usually no meat, just a lot of shell. I remember first seeing these things at Oakland Airport. It was very late, and I was picking up a shipment from South West airlines and there were these boxes labeled “product of Vietnam”. I heard noises coming from them too. Being the curious guy I am, I peaked into the boxes and saw the mudcrabs. I never seen those before and I’m sure some exotic Asian seafood restaurant was the destination. One day I want to go catch my own in the mangroves! 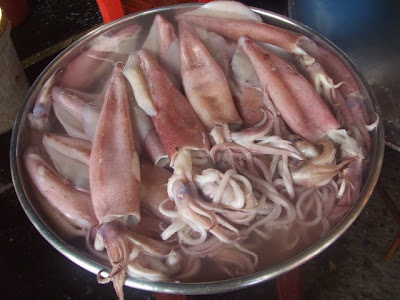 The fish market in Vinh Long is some ways in from the ocean. But still some seafoods are available, like these squids. 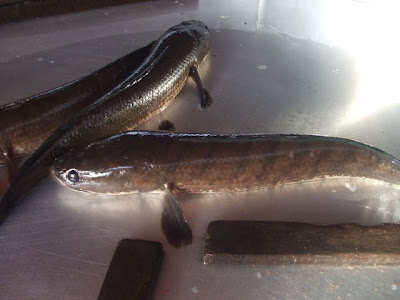 So these are highly illegal in the US. These are snakeheads, an apex predator that can wipe out other fish species by eating them! I’ve caught these in the rice patties before. These must be a favorite for the Vietnamese, as they are plentiful and gets large. 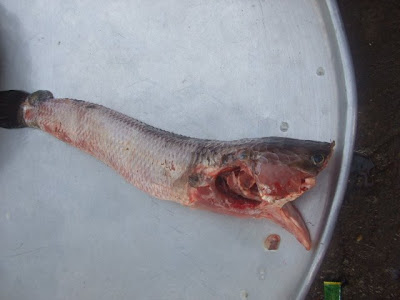 Here is one that has been skinned and not looking so happy. 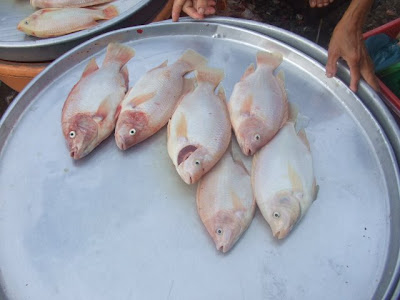 Of course tilapia is a staple and is farmed all over Vietnam. I’ve seen the floating fishfarms in the Mekong River system before. I’ll tried to get some pictures later. 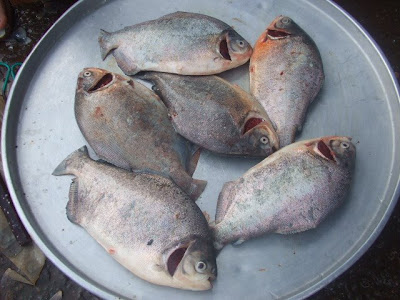 These piranha looking guys are of course, pacus. These can get very large and meaty. There are fishing ponds in Jakarta where they stock these and you pay money to catch them. Hooking them is the problem. They have a plate like hard area on their upper lip that make them very difficult to hook. Most are around half to a kilo, but they do stock some monster 5-6 kilo (10-12 lbs.) brutes! You catch one of these, you can win over $100 US. It is pretty interesting, the whole affair. I will go fishing again and do a write up when I get the chance. I’ve gone there 5 times total and haven’t caught one yet! 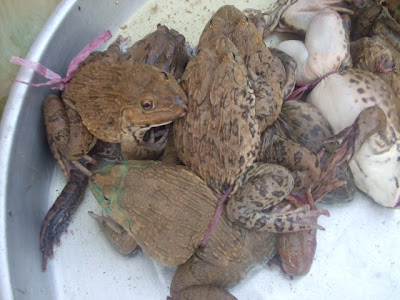 The first time I had frogs to eat was here in Vietnam. It kind of tasted like chicken! When I was little living in Korea, I used to go catch these guys for fun. I would try to sneak up on them while they were sitting at the edge of the rice patties. I never thought to eat them. But what do I know. Almost 40 years later, I find out that these are delicacies in many other countries. I have eaten deep fried frog leggs with some black soy sauce many times in Indonesia. My friend Gili loves them! But I do feel sorry for these particular guys. They are all tied up together while one by one, each gets skinned alive and place in front of them. I wonder if they can feel fear? 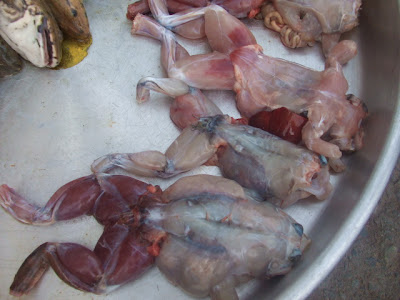 So here are the fellow brethrens lying in front of the “brothers in arms”! 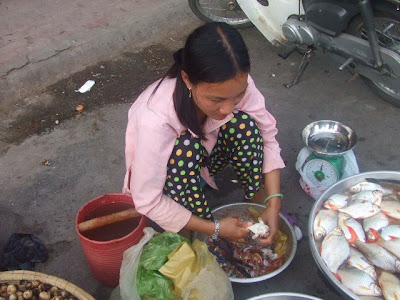 And here is the perpetrator! Can’t blame her though, she is only trying to make a living. But heck still, using scissors to cut away while the poor guy is still alive is just not cool! I've seen the guys at the Asian fish markets in the US do the same. But still, I guess keeping them as pets before gives me a soft heart for them. I’m having second thoughts about eating frogs again! 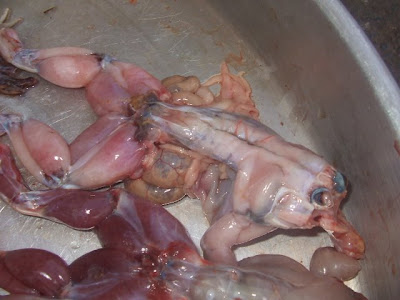 And here is the fellow that just got skinned alive! You can see how slimy he still is! 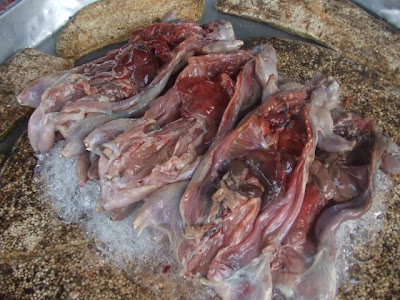 Ok, if you thought fresh skinned frogs were gross, can you guess what these are? I will have the answer for you on my next post!

The fish markets are always intriguing to me. I guess it comes from my love for fishing. I will post again in a few days if I get my laptop back. Until then, thanks for checking out my blog.