Hello everyone. So let's continue on, to my trip to Less Village. One of my goals for the trip was to meet up with the two stars of "Fish Don't Cry", Gombal - the main character and Rusman - the little boy catching fish in the beginning of the video.

I arrived at Less around 2 pm and it looked deserted. The fishermen were still out and there were only few kids and grandmothers at the compound. After talking to some of the elders, we found that Gombal was out fishing and Rusman lived nearby. We also heard rumors that Rusman was seen near his house not far from the compound. After some searching and asking around, we found him relaxing with his wife at their humble home.

I have uploaded the following videos on youtube. Go check it out. 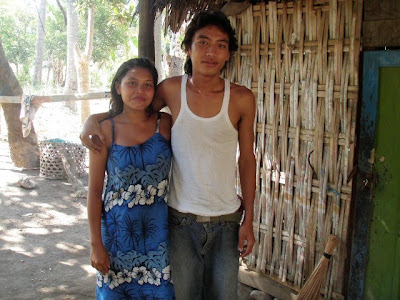 Rusman had grown up and married, even expecting a baby! Note the "humble" home in the background. It is true that the poor fishermen only make little, that most of the money is made by exporters. I hate to say that since I am an exporter, but it is true. Personally I always try to give a little extra to help out, and in these neck of woods, little good gesture can go a long way! 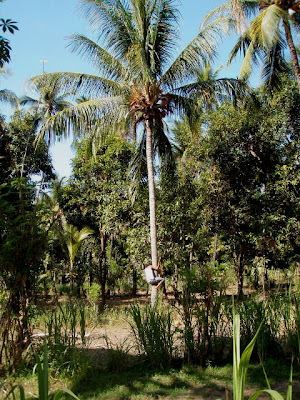 After talking with him for a little time, he offered us coconut - cool! 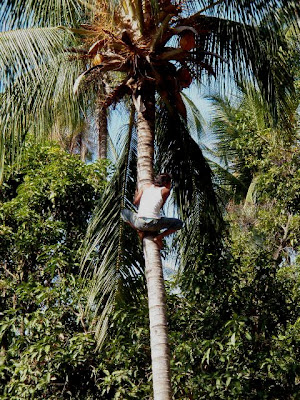 Rusman ran up the coconut tree with ease. Dude was like a monkey! 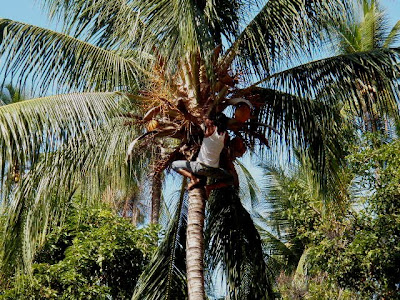 After reaching the fruit, it is just a matter of hacking it off and letting it fall. 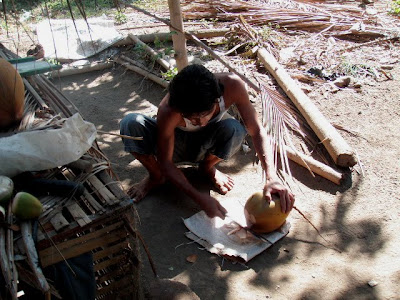 Rusman definitely has done this before! 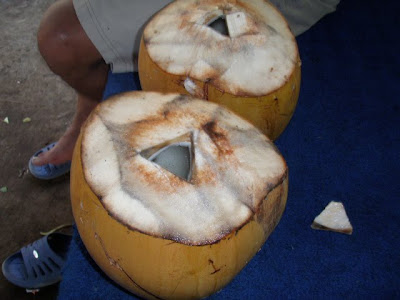 Fresh coconut juice. Just in case some of you don't know, coconut "milk" is not the same as the juice inside. The milk comes from the meat. The meat is scraped off and squeezed to get the "milk" out. If you don't live in the tropics, you probably didn't know this. Coconut milk is used for cooking in many South East Asian countries, especially in Malaysia and Thailand. 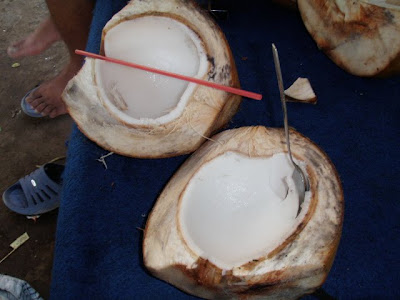 After drinking all of the juice, the coconut is cut in half and the meat can be scraped off with a spoon - yummy! The first time I had fresh coconut like this was back in the Tonga. 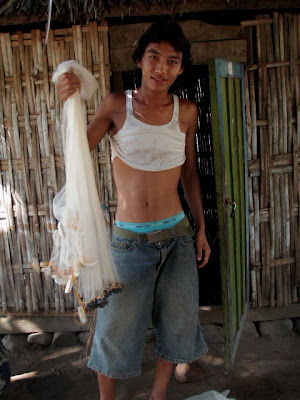 Rusman showing off his barrier net for catching ornamental fish. What he knows will be passed on to other youngsters in his village. Not much opportunity for the local kids, so many of them will become like Rusman and catch fish for a living. 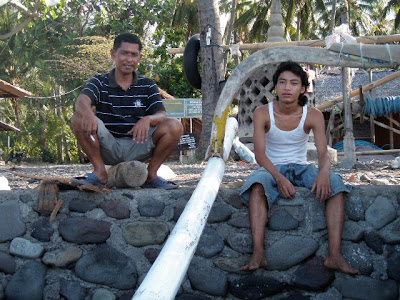 Back at Less, Rusman on the right and Awang, my driver and translator. I have been teaching Awang on corals for the past year. I hope to be able to send him to look for corals for me one day. 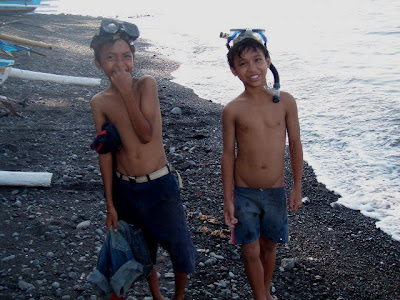 What future holds for these kids? Not much. These guys will probably follow in the footsteps of their fathers and brothers and become fishermen. Some will be catching food fish, while others will focus on aquarium fish. 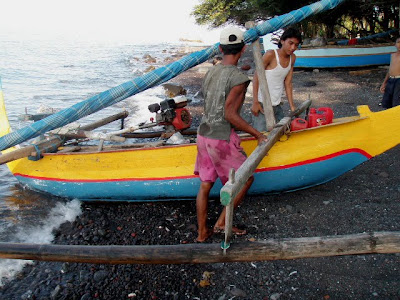 While we were waiting for Gombal to return, one of the locals had returned from a day of fishing. 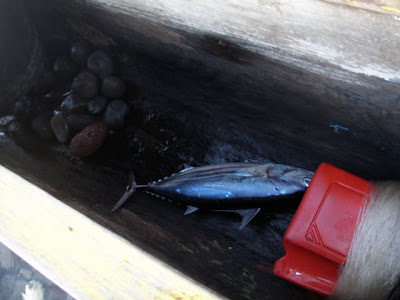 The rewards for a full day of fishing for food fish - a lonely skipjack tuna, barely enough to cover cost of living for his family for a day. I believe this lonely fish will be used as food for the family. 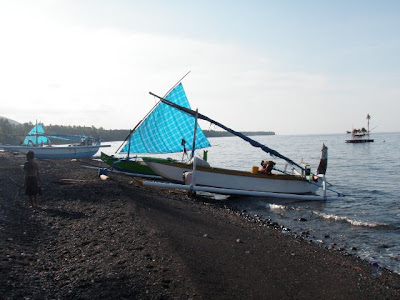 Note the hand made sail. Most of the food fishing boats had these things installed. I guess in case the engine dies out, the sail can be used to get home. 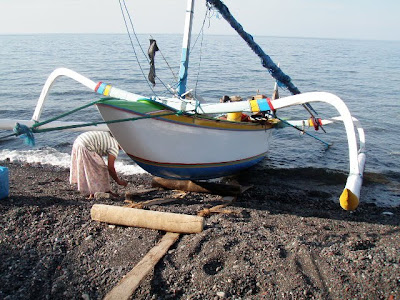 Another food fishing boat coming to beach. That lady is the wife of the fisherman who had just returned. Here she helps with the round logs, while the husband pulls the boat in. 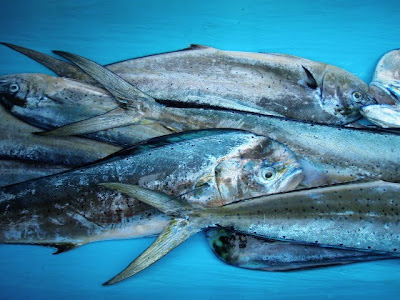 I was surprised to see so many fish on this boat! About a dozen mahi mahi and a half dozen of tuna. Wow this fishermen must have been lucky to catch all these fish! It turned out that the fish were caught way out in the ocean. It took 8 hours to get to the fishing grounds! Basically the guy hasn't slept for a long time, but his reward is very good. Later in the evening, the fish will be taken to town and sold at a market. 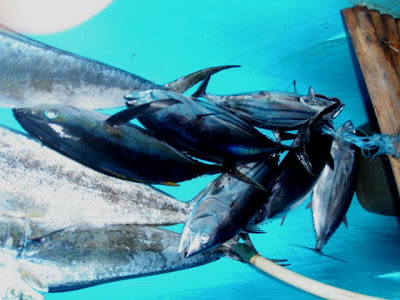 One of the tunas, was a small yellowfin. Sometimes a big 50 kilo (100lbs plus) one will be caught. A fish this size would be taken to Denpasar (capital) and sold to exporters. 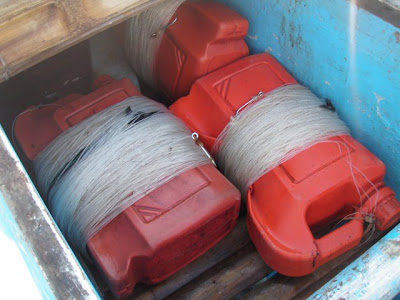 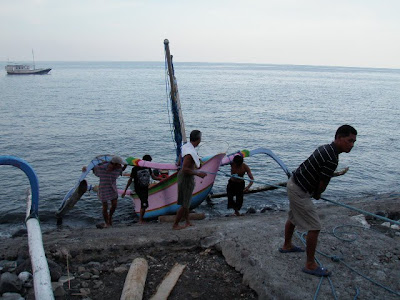 Just then another food fishing boat came in. We were told that the guys catching ornamental fish must be having good luck as they had not returned. They will catch as much as they can before coming home. If bad weather or simply cannot find the fish, they would come home early. 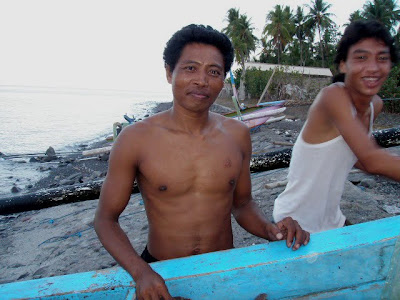 What a surprise, it wasn't until I was shooting a video that I realized Gombal was in front of me! I recognized him by his scar on his left chest. He looked much older and not as thin. Wow what a stroke of luck, as I needed to get going to East Java. Coral suppliers were hounding us as they had prepared lots of goodies just for "Mr. Eddy", as I am called here. The suppliers wanted to us to hurry up and see what they had prepared for me. Always a good thing to hear! 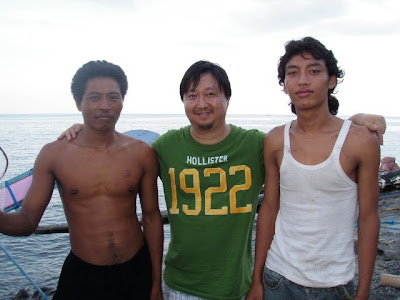 And I wasn't going to leave until I met Rusman and Gombal! I hope to see these guys again and see them in action!

Ok guys that is it for today. I hope you have enjoyed the post and videos. Less Village still has over 100 fishermen catching ornamental fish everyday. It would have been exciting to see what fish were caught but my coral suppliers were waiting. One day I hope to set up shop at Less
Village and check out newly caught fish everyday!

Nice to see your adventures in the village. The scene and way of life is so familiar to me because I grow in Philippines. It looks much the same with us. I missed those coconuts..heheh.