Hello everyone. A few weeks ago, I was able to stop by Less Village in Northern Bali, on my way to East Java. Here are some hi lights from that trip.

I also shot some videos at Less but can't seem to upload because of bad internet connection. I hope to have them uploaded on youtube for the second part of this series. 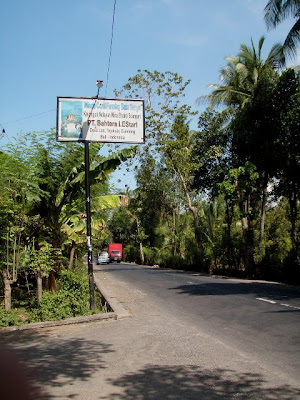 So this is the main road that the little boy Rusman was seeing running in the beginning of the video "Fish Don't Cry". The little road to the left leads to the fishing village. Finding the village was easy because of the conspicuous sign. 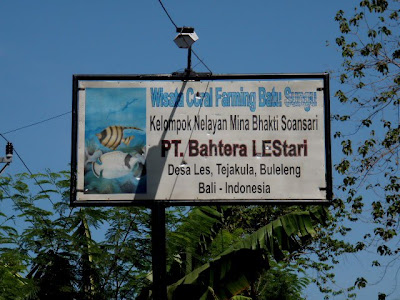 And here is a close up of the little billboard. I believe Pt. Bahtera Lestari was the export company that went out of business. 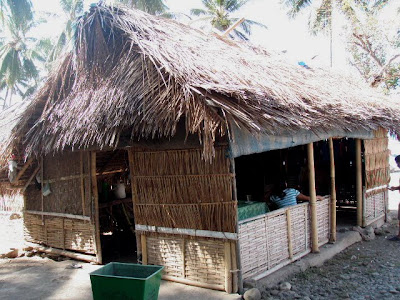 A few hundred yards on the small road and we were at Less! One of the first things I saw as we drove in was this little hut, looked to be a little resting area with tables. 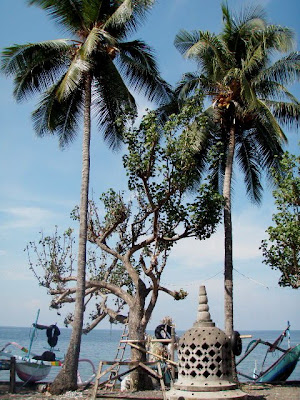 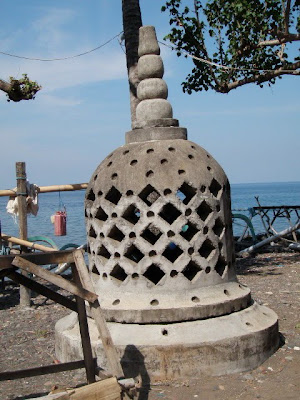 Here is a close up view of the small cement structure, not sure what it's supposed to be and forgot to ask! 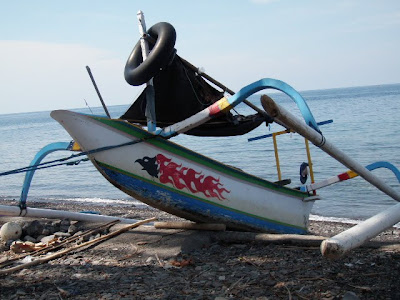 So this is how the boats are anchored down. The hull of the boat rests on round logs. This makes it easy to launch the boats since gravity will pull it downhill to the water. 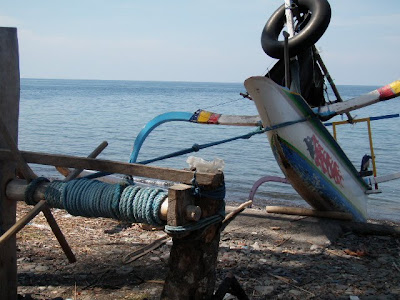 The boat is anchored down with rope that keeps it from rolling back into the sea. You can see how the pulley device is used to haul the boat up from the water. Much better than using sweat as we saw in the video. Note the inner tube. That thing is filled with oxygen and is used to bag the fresh caught fish during transport back to mainland. Clever idea as no need for bulky oxygen tanks and expensive regulators. After all the oxygen is used up, it is simply refilled again. 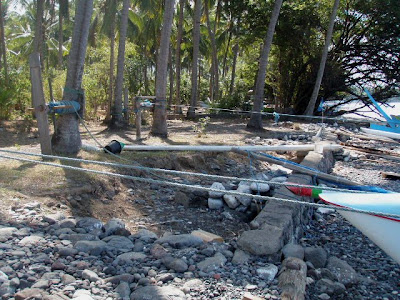 Due to Balinese holiday, not all the fishermen were out this particular day. Here you can see several boats still tied up. 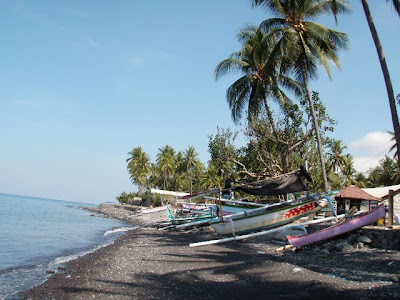 The tide was low when I arrived and the water was pretty clear. 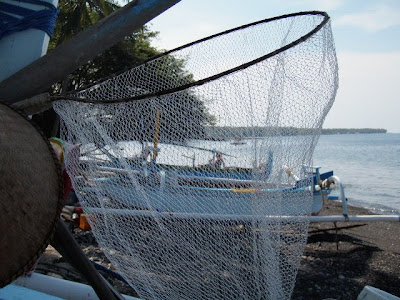 Some of the boats were equipped for fishing eating fish. It looked like many fishermen take turns catching aquarium fish and food fish. This large net looked to be used to scoop up food fish, too big as a scooper net for aquarium fish. 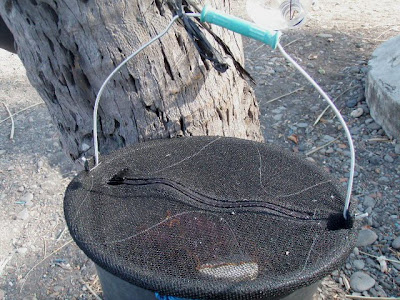 For sure this decompression bucket is for ornamental fish. A zipper is sewed in to make easier to open and close. 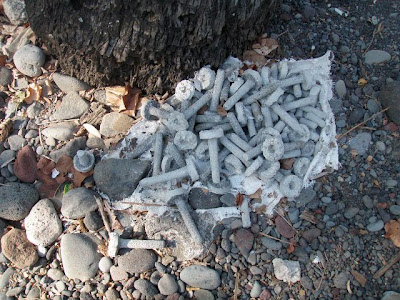 It looks like aquaculturing is still going on at Less! These are coral plugs. The plug part is made separate from the long base. The base is cemented on after both pieces have fully dried. 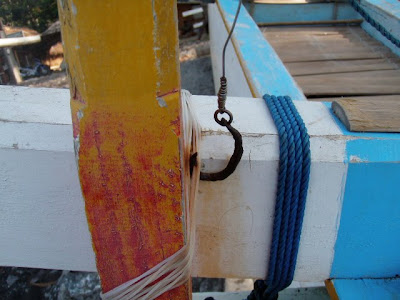 A rusty old hook on one of the food fish boats. I wonder how many fish this hook has caught? 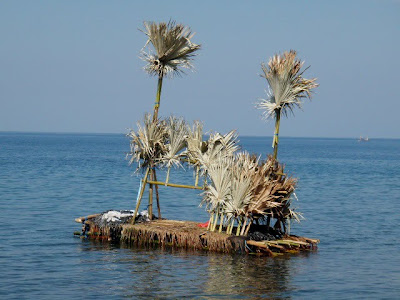 So this was interesting! A floating oasis made from bamboo and coconut trees. This thing is designed to attract birds that is looking for fish. So the fishermen tow this thing out to the reefs and lets it drift. They stay back from a distance and watch for birds. If enough birds show up and land on this floating paradise, the fishermen quickly go to that spot. Theoretically the birds are attracted to the fish below, both ornamental and food fish is found in this matter. I guess it really works as there were several of these things in the waters. Another trick of the trade. We would call this "fish finder" in the US! 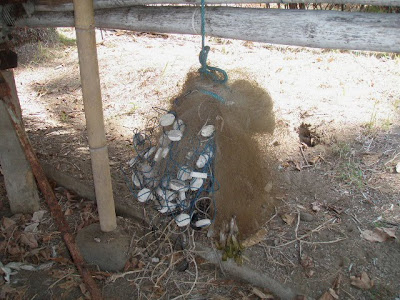 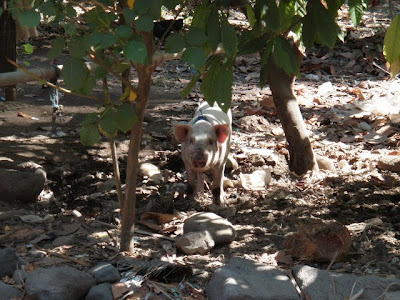 "Wilbur" was staring at me while I was busy taking pictures. This little guy will probably end up being roasted for a wedding - quick find Charlotte! 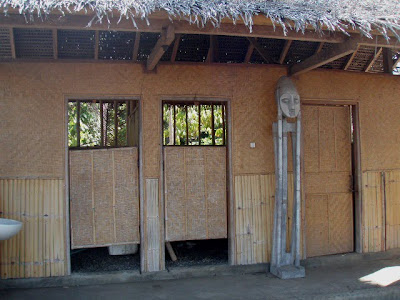 So this is like where the fishermen can wash up and change after diving. The little door on the far right was the bathroom, or toilet as we say here in Indo. 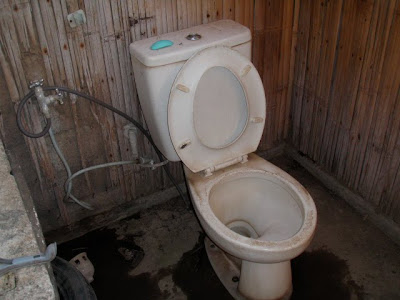 I was lucky, it had a sit down toilet. I guess I'm too Americanized for squat bowls, I really don't like those. The local food earlier was not adjusting too well in my stomach! Good thing I always carry toilet paper in my pocket, but the flush didn't work so I had to go get water from Northern Bali bay! 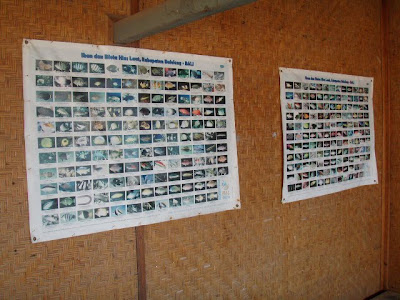 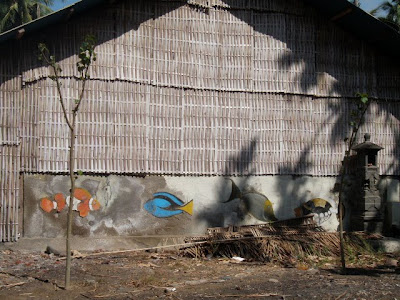 Fish holding building, but looked to be empty. 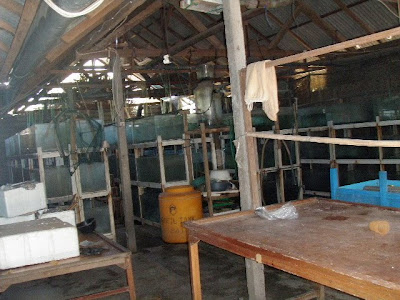 There was another building next to the one above. This was also empty but with lots of tanks and a packing table. There was a fish exporting company that used to run out of Less, and my friend who used to have a wholesale operation in the US used to buy from them. Then management changed and everything went downhill. My friend stopped buying from them and they went out business. It turns out that this place has been vacant for a long time. Perhaps one day I will start up doing fish from this facility, easily can fix everything up. I can provide the healthiest net caught fish from Indonesia. Working with over 100 fishermen and suppliers at Less, I think I could really make it work! 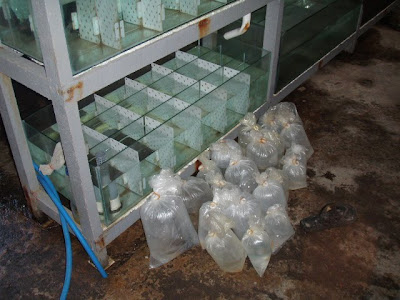 I spotted another building and this place had some tanks running. Not much fish as I heard that the suppliers already had taken the fish to the buyers. Here is how it works. At Less Village, you have four suppliers that buy fish from the fishermen. The suppliers take the fish to Denpassar (four hours away) to sell to the exporters. Some individual fishermen also sell directly to the exporters as well. 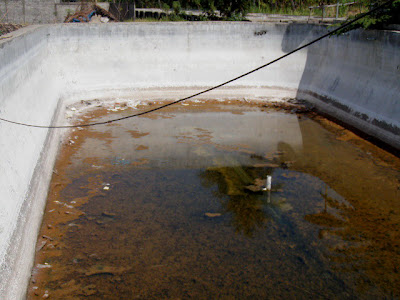 Up this little hill was this huge empty swimming pool sized concrete pond. Like many things, it looked to be abandoned for a long time. Perhaps it was used to house brood stock for consumption fish or something sometime ago (silly me forgot to ask). But as soon as I saw the pond, I thought about sharks. This pond probably has a drain that directly goes out to the sea. Since baby sharks are high in demand and they are only available during certain months, if I was doing fish, I would keep them in here for quarantine. Baby black tips and white tips are popular even among local aquarists. Can't wait to start something up at Less! 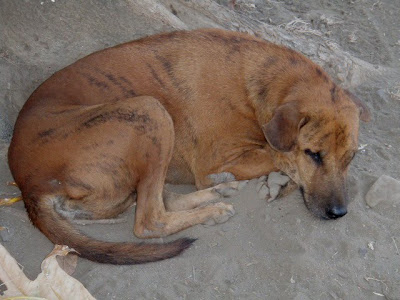 And lastly, man's best friend taking a nap in the shade of a coconut tree. Reminded me of my brindle boxer (my baby) back at home in the US. Some people ask me how I got my email address to be joylucktp2000@yahoo.com and why. I tell them "joyluck is the name of my dog. I found her in the streets when she was a puppy at 2 in the morning. I named her joyluck because she brings me "joy and luck". 2000 was the year I found her and "tp" stands for Tropical Paradise, my lfs at the time.

Ok guys that is it for today, I hope you enjoyed the pictures and info of Less Village. Coming up in part 2 of this series, I get to meet Gombal, the main character in "Fish Don't Cry" and the little boy Rusman. Rusman is a grown man now and has a pregnant wife!