Hello everyone. So I'm having a blast in Hong Kong. Never knew that this little island would be such a blast! With great food, great weather, and how everything runs so efficient - I can see myself staying here for a long time. I'll go over "life in Hong Kong" on the next post.

For today's topic, let's have a look at the local fish stores (LFS) in this cozy little island. The only problem is that the stores will not let anyone take pictures inside. I guess the competition is fierce and don't want any spies taking conspiracy photographs. The store owners really know what is up. They all sell the latest gadgets and carry every brand of dry goods you can imagine. I can say that for the most part, the reef shops in Hong Kong are all high end guys.

And the fish! I saw fish from Red Sea, Australia, Caribbean, Hawaii, South Pacific fish like ventralis anthias, Philippines, Vietnam, South China Sea, and of course Indonesia. Cleaner shrimps and fire shrimps from Sri Lanka seemed to be everywhere. The fish selection is truly huge and for some, really cheap! For others, crazy expensive like the ventralis anthias. The males were selling for US$200 a piece! The females were less. They must have had at least 20 males and more than that of the females. And sure enough people were buying! 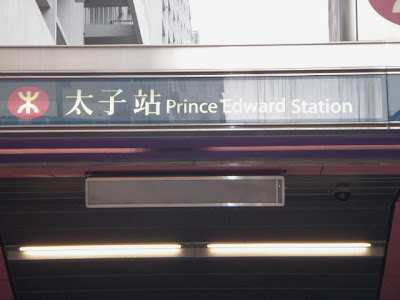 The main part of Hong Kong where the "fish street" is located is in an area called Prince Edward. I stay in a little hotel in this area because it is walking distance to the shops. The picture above is an entrance to the Prince Edward subway station. For sure it is named after one of the royals of Britain. After all, the British colonized Hong Kong many years ago and left many of their influences behind. More on this on the next topic. 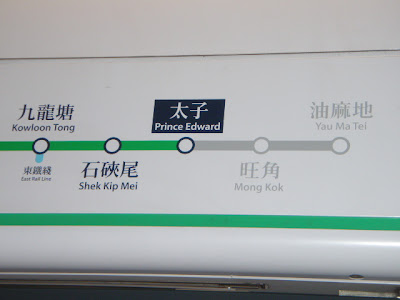 I took this photo as I was riding the subway train. Kind of odd since all the other stops were Chinese names, and then you have "Prince Edward"! 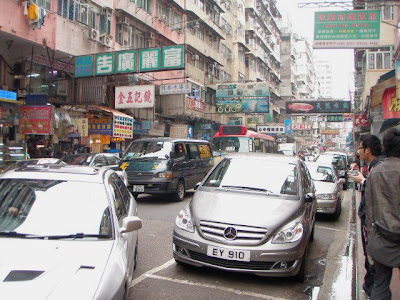 So this is the entrance to the "fish row". It is dominated by fresh water aquarium stores, but there are lots of high end reef shops. Many of these shops are located upstairs. There are signs but you would miss it if you didn't know that they were there. You would have to ring the doorbell and let the owners let you in and climb up the stairs to the second story. 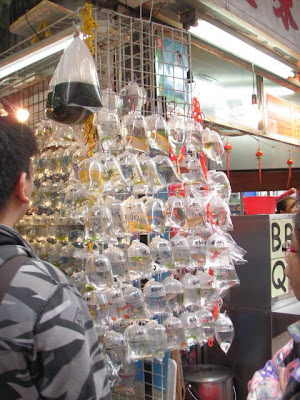 Convenience is a factor. Pre - bagged and to go! 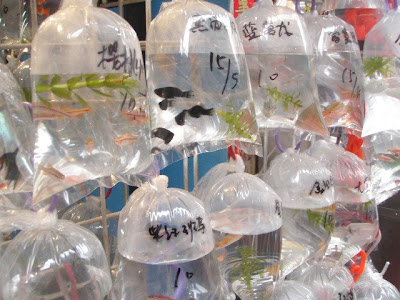 Here is a close up shot. This rack mainly has tetras and mollies. 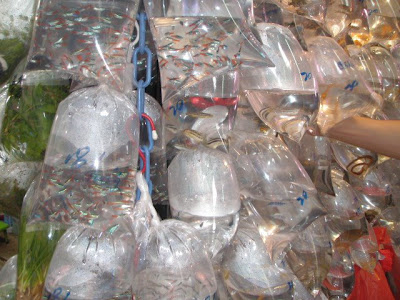 Neon tetras by the bunch. 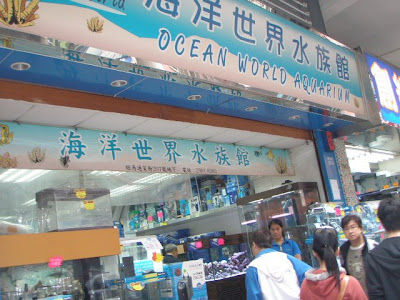 One of many reef shops on the street. Having such a store with door to door competitors actually help the sales. Surprisingly though, there were customers in each shop buying all kinds of things. 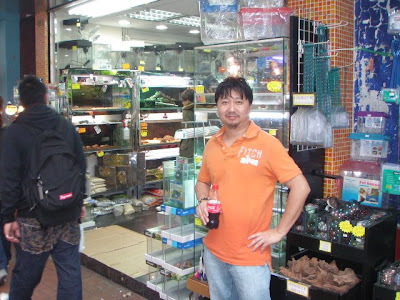 Many of the goods are displayed along the sidewalk. Here I am enjoying Hong Kong Coka cola. It is interesting to taste all the different formulas of this addicting soft drink. I say different formulas because it taste different in every country. But technically, the formula should be the same and taste the same, but it doesn't. One thing I have noticed is that our coke back in the US tends to taste much sweeter than its counterparts in the South East Asia. That is why I drink diet coke back at home! 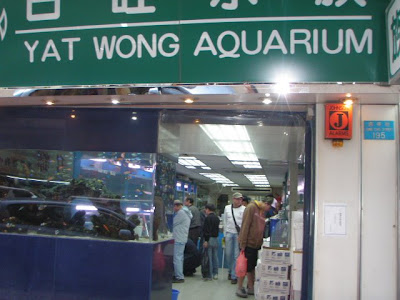 Here is one of the premier reef shops on the street. There is a nice display tank near the entrance. I believe this is one of the guys that carried the Clarion angels from my friend Steve Robinson. Just to let you know, Steve will be bringing in the rare Clipperton angels to Hong Kong soon, and chances are that you will see some in this store. 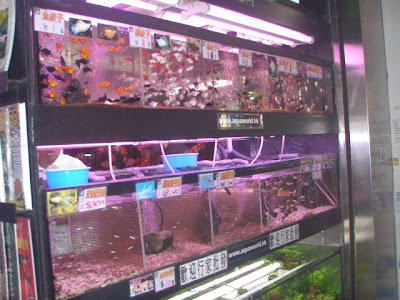 Freshwater fish in cubicles for sale. 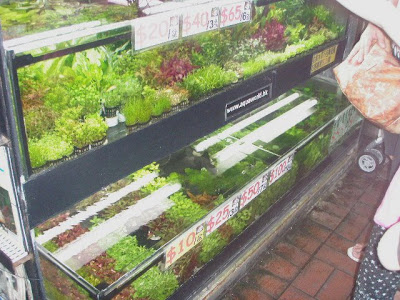 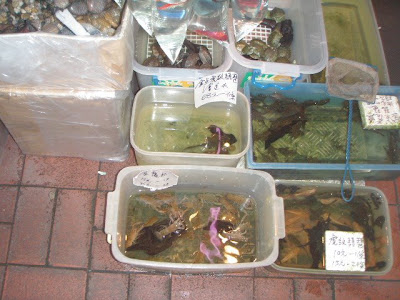 Some baby turtles and plecos and few other odds and ends on the sidewalk for sale. 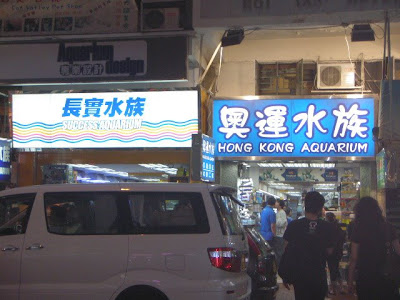 Some cool original names of their shops. The one on the left is called "Success Aquarium"! 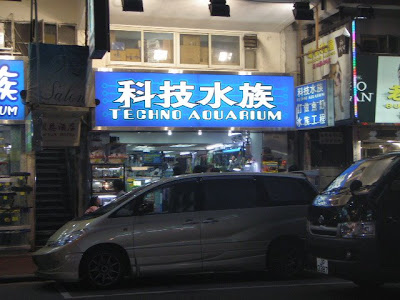 Some are just silly. I think they meant "High tech Aquarium"! 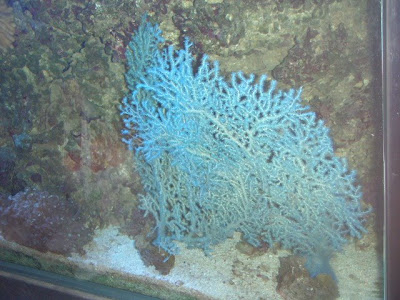 I managed to take this photo of a killer blue seafan on a door entrance display tank. I was told that this came from the South China Sea. Just insane! 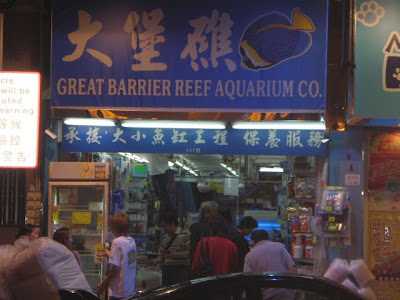 Here is another high end reef shop, even properly named! 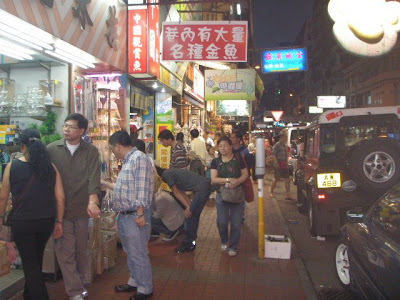 Even on a weeknight, the street is busy with hobbyists! 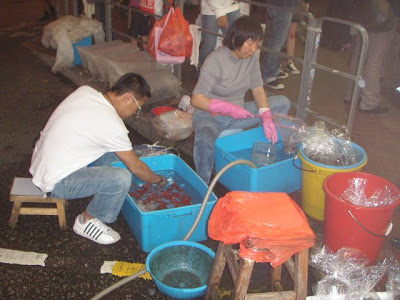 These guys are selling golfish right on the street! 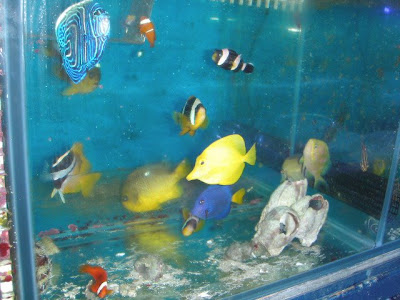 And so I was allowed to take pictures in the shop that will carry my corals. These are actually a customer's fish. The owner does lots of maintenance work besides retailing, kind of what I used to do. 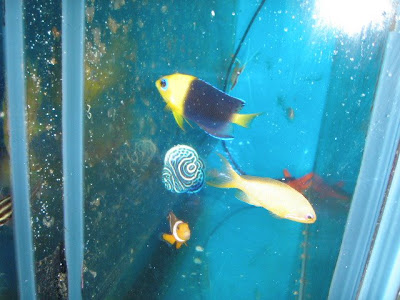 Check out the bicolor looking Centropyge joculator pigmy angelfish. This rare beauty comes from the Cocos-Keeling islands in the Indian Ocean. 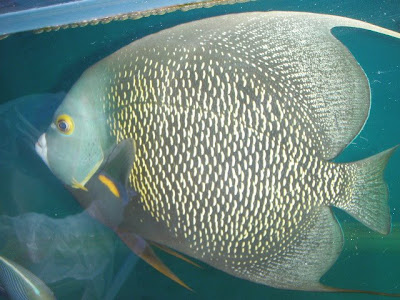 The Hong Kong fish keepers are into big fish! I saw all species of giant angelfish, including this magnificent French angel from the Caribbean. 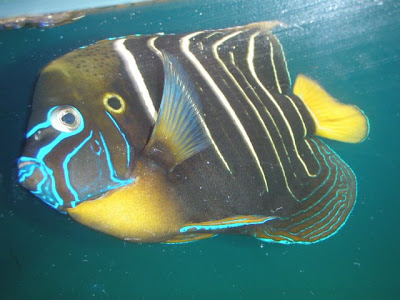 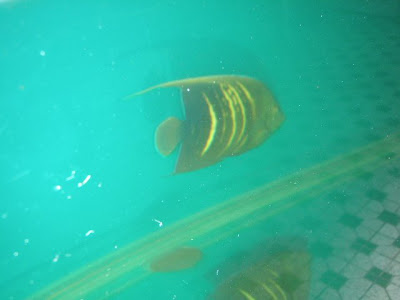 Sorry guys for the blurry picture, but this guy just did not want his picture taken! This is a very rare Pomacanthus chrysurus - Pomacanthus semicirculatus hybrid. I have heard of them and seen in books but never saw in person, until now! 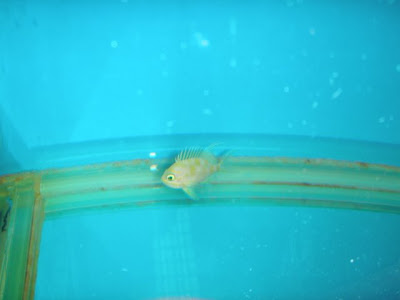 I've seen these deepwater anthias come out of Flores from time to time. 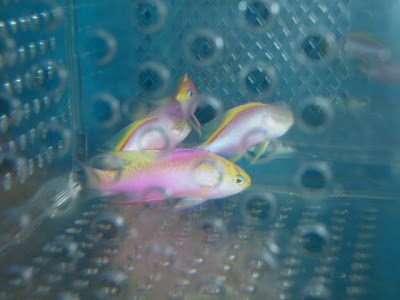 .Ventralis anthias! I'm not sure where these came from. They could have come from one of many of the South Pacific islands. The one in the front is a male, and the other three in the back are females. Way overpriced in my opinion here in Hong Kong. 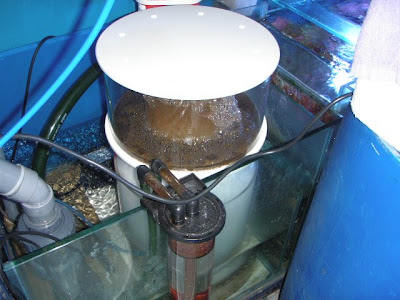 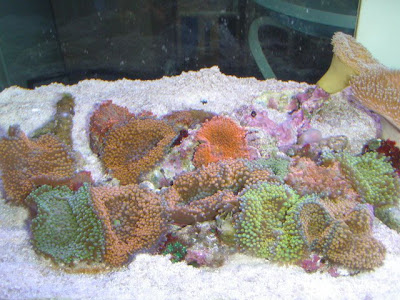 Ricordia floridas from the Caribbean. These guys are far away from home, and worth lots of money in foreign soil!

Ok guys that is it for today. For my next post, I think I will be posting it from Indo, we will look into "life in Hong Kong" Pretty exciting stuff, including pictures of huge 3 foot Napoleon wrasses for eating! Also took a day and went fishing, wait and see what I found in Hong Kong harbor! All this and more coming up in the next posts. After that, I will post more coral pics, still have hundreds to share!

The deepwater anthias must be Odontanthias Borbonius, also known as the Checked Anthias or Blotchy Anthias. These hardy anthias readily feed on Mysis shrimp. They are reef safe, do well in groups and generally peaceful. Lovely fish! Nice pics! Keep it coming :)

Its nice to see what the aquarium market is like in other parts of the world.

I sent out a small sample shipment, some nice yumas and few lps's as trial. Go check it out, the corals are already there.

I sent you an e-mail already.

I'm still testing the Hong Kong market on the corals with Mr. Fai. I'm in talks right now with him to see what corals I'm going to send next. I'll mention that you are looking for sps!
I'll update you as we move along.

We do have a big bunch of SPS lover who are seaking for 'top quality' species....... In HK, we do have several shops selling commond SPS regularly....... but 'top quality' SPS seems to be very rare......... hope to see u sending us some really good stuff...

I'll keep that in mind and definitely will send some. I'll keep you updated on the shipment. Post me a species wanted list, and I'll try to find.

What exit do you take at the Prince Edward station to get to the entrance to the fish street?

I live in Macau and I am interested in comming over to hong kong to look around at some Salt Water fish stores as they are very limited here in Macau.

I don't know if by any chance you visited Japan, but if not maybe you want to take a look at the ruins found on the coast of Yonaguni, you will be impressed.

Do you know if it is possible to take corals from Hong Kong and bring back to US? I am in HKG for a trip and would like to take some pieces back but not sure if it is possible. If you could provide some info on that, I would greatly appreciated it.