Hello everyone!  A miracle has happened and I am back in Bali working on a special project.  I am truly lucky to be able to continue my passion playing with corals in Indonesia.  Tonga really left me in a dark mood and swore that I was done working overseas, but a year later, here I am.  I am grateful to a good friend that invited me to join him to work on a special aquaculture project.  This project is something I wanted to do 7 years ago, but didn't have a license to work with.  I'll explain the details of the project later, along with introducing my Indonesia friend/business partner.  But for now let's have a look at some corals that caught my eye.  I love acros, and to give you a hint, all pieces below will be available as aquacultures in the future. Oh and by the way, I am posting this from a hotel room in beautiful Bali! 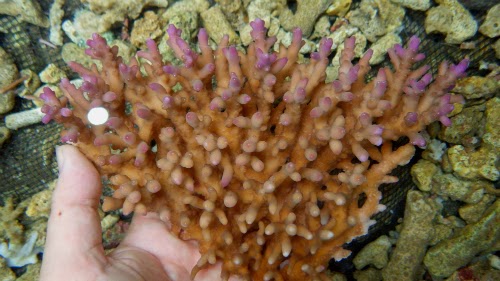 This is one of my favorite deep water acroporas from the Northern Bali area.  This is probably a granulosa or a lokani.  It is the "purple monster" species made famous by Steve Tyree.  Steve once came to my shop in the SF area years ago and I showed him "my purple monster" (a Bali cultured piece).  He took a frag back and called it "Eddies purple monster".  But it wasn't this coral that impressed Steve, it was a small Montipora undata colony that I had.  It was green with a purple rim with whitish greenish polyps.  It looked just like the photo in Veron's Corals of the World book.  There were many "undatas" floating in the trade but this one was truly the one from the book.  I gave Steve a piece and he called it the "true undata", a limited edition piece.  In all of the years I spent looking at corals in the South Pacific and here, I have never came upon this particular montipora.  There were plenty of similar undatas but never the piece I had.

Ok, sorry got off the topic I tend to do that when talking about corals.  I have so many stories that can relate, forgive my absent mindness.  Anyways the picture of the granulosa-lokani was taken under 10K T5's. The base color is much more green than it shows.  As many of the deepwater acros do, the colors will change under artificial lighting in our aquariums.  The purple tips can turn into an intense purple, thus the term "purple monster"! 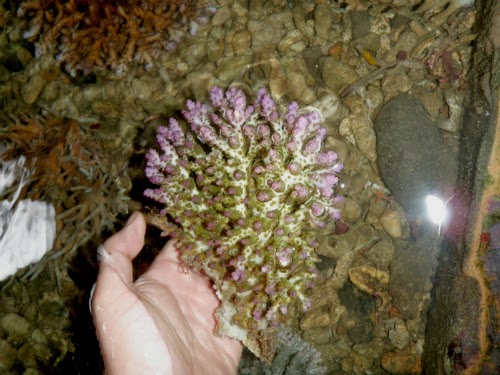 Nice little colony of Acropora plana.  The picture was taken with flash under natural dim lighting, but you can still make out the gorgeous colors.  Another gem found in deeper waters of Northern Bali! 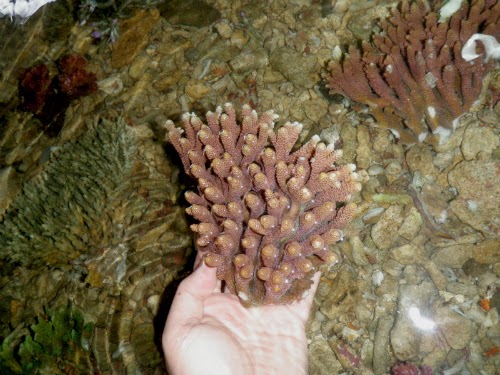 Of all the acropora species, the milleporas are among the most popular.  They come in all kinds of cool colors and mixtures.  This one is an oldie but goodie, red with yellow tips.  Again this photo was taken with flash under normal lighting conditions. 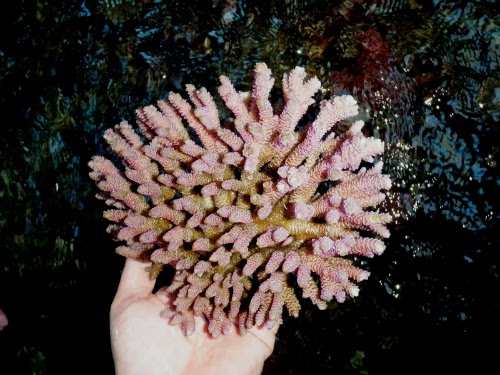 I took this picture out of the water with flash.  This raspberry green milli is insane! 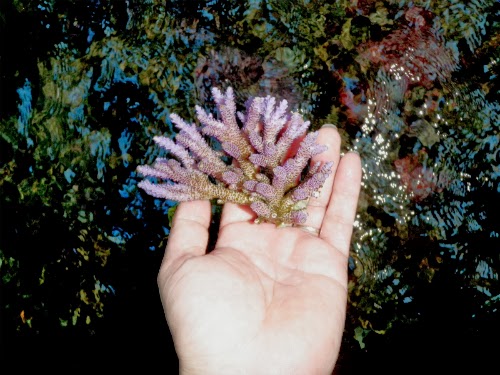 A large frag of another Acropora millepora.  This one is purple blue with whitish tips, super nice! 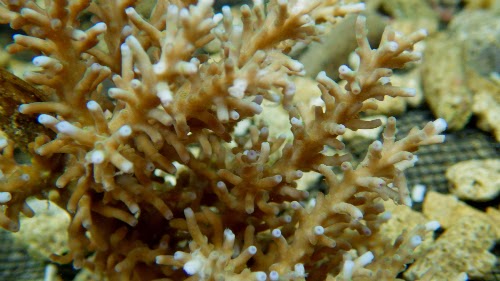 Take a guess at this deepwater bottlebrush acro.  If you said echinata, you're going to Disneyland!  In the ocean, the colors are green blue with sky blue tips.  In our aquariums, many will turn sky blue.  Like many of the delicate deepwater species, this coral can bleach quickly if not careful.  Oh and did I mention it has blue polyps?  Nice! 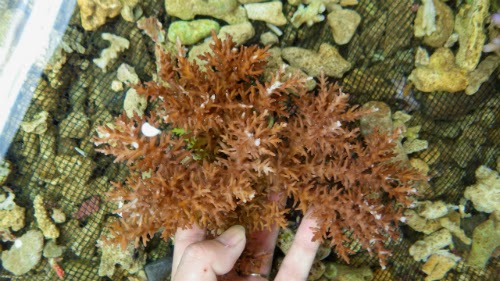 So this is what a wild "red dragon" acropora looks like out of the ocean.  Under 10K T5s, the coral looks brown.  In the wild, this coral shows off its true colors as red!  In our aquariums, with the correct lighting, this coral can turn into a dark burgundy to a real red color.  The actual species is a guess, and I'll cover more on this later when I build a database for my Northern Bali collection. 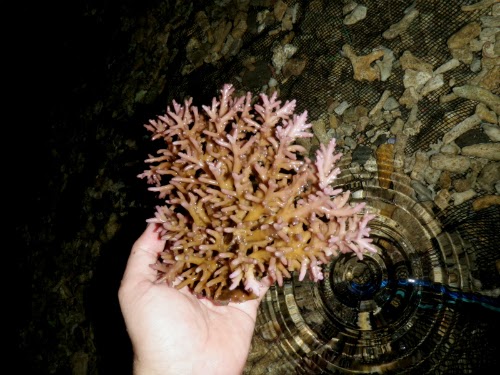 This brown coral was sitting in a corner getting no love in my supplier's place.  At first glance, it appears to be a brown thin branch granulosa or a lokani.  But the growth pattern on the tips was unusual, in some parts the corallites were growing fused together kind of like a simplex.  The body color was a bit unusual and I kept staring at it.   Something was different about this piece but couldn't figure it out.  Finally I asked the diver if this coral was orange in color when collected.  He responded by saying that it was red! 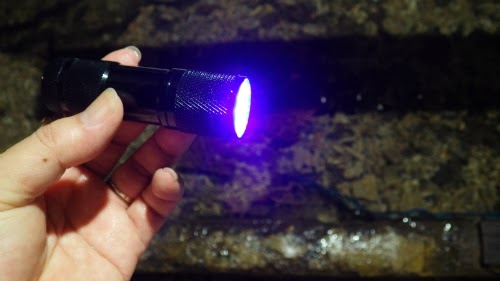 I went back to my hotel and grabbed this little blue LED flashlight in a hurry! 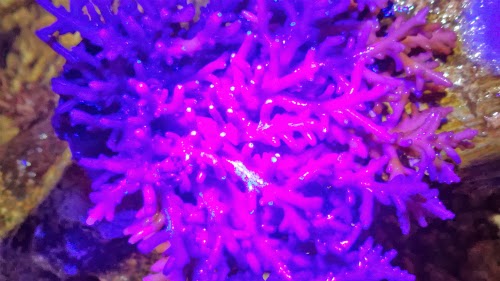 And behold, the coral was indeed red!  Notice the green tip color on the corallites?  Looks like green polyps that is withdrawn.  Just like the red dragon, this coral has the potential to turn real red in our aquariums.  It turns out that this coral is kind of rare in the wild.  The diver confirmed only seeing it from time to time.  I had this coral immediately chopped up into pieces and mounted onto cement bases to be kept as broodstock for the future. 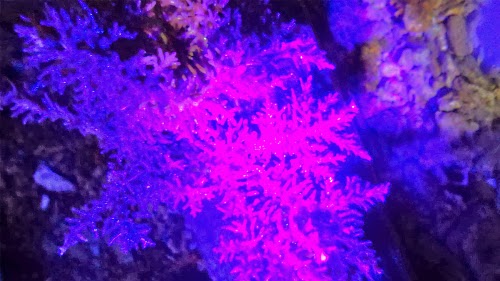 This is a picture of the red dragon under the blue LED. 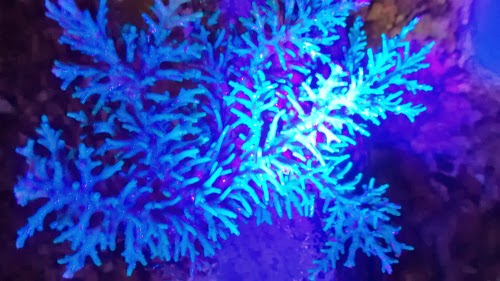 And here is the typical bottlebrush type of acro that is not red.  Actually all the non red corals look this color under the blue LED flashlight.

I cannot tell you in words how excited I am about being back in Bali.  Not just being here, but to be able to work on a project that I've been saving for years.  I thought I would never get the chance but guess God is looking after me, or maybe he just likes corals too LOL!  I have lots of stories to tell and corals to talk about, so please stand by.

Also I will be updating on my facebook page, so if you would like to become friends, please send me a request.  Eddie Hanson is my name and you can reach me at   joylucktp2000@yahoo.com for any questions or suggestions.

Cheers everyone,
Eddie
Posted by Eddie H. at 6:30 AM

that looks awesome! I especially love that red lokani. I don't think I've seen one like that!

I love granulosas and lokanis. that's a pretty big colony of red dragon. how far deep were the lokanis and red dragon? I always hear they're deep water, just wondering how deep.

The deepwater corals are collected in 10 to 15 meters. But the thing to consider is that the water is not clear, more murky so less sun penetrates the corals.

ha that's interesting to know. murky water. so basically they don't like strong light then.

Yes it is similar, could be the same coral. Can compare the finished product with the picture in a few months.

Its nice to see how the coral reacts to led light and turned into something wonderful that your eyes would love to see. How did that happen anyway?