Hello everyone, I'm back in Indonesia. Sorry I haven't posted in a while, been busy with a family crisis. For today's topic I would like to talk about two very important people in my life, my aunt and uncle. But first, we need to back up and tell you the story of how I ended up in the US with the name Eddie Hanson. I currently live with my aunt and uncle in the US, when I'm not in Indo. They have been like parents to me and have raised me well (at least I think they did, I turned out ok - well sort of..).

I used to live in South Korea (Seoul) with my mom, dad, a younger brother and two older sisters. When I was five, my father died from hardening of the liver. He had drunk too much alcohol in his younger days and it had caught up to him. He was only in his early thirties. This is the reason why me and my brother don't drink. As we grew up everyone told us not to drink, other wise we would end up like our father. As a Korean guy, I got to tell you that me and my brother are rare exceptions... All Korean guys (and many girls too) love alcohol!

My father's last dying wish was that I, (being the favorite because of being the first male and carrying the family name) would go live with his older sister in America. Basically to grow up in the US to have a better life. Well, the wish came true two years later. In 1977, my aunt and uncle in the US legally adopted me as their son. I think because my father had died, this was the only way my aunt could bring me over. I didn't really understand what was going on, really I thought I was going on a holiday trip - wrong!

I was given the name Edward Sok Hanson. My uncle's name is Edgar Hanson, so I ended up almost being a junior. Sok is my middle Korean name. My uncle is Swedish. He once told me that if the last name spells "Hansen" with "sen", then the person is from Norway, but if it spells with "son" then, they are Swedish. I had an "entertaining" childhood being an Asian guy with a white name. All through out schooling, everyone expected to see this little blond boy, but ended up getting me! Wow, I could write a book on my childhood adventures (hmm..another blog..)just based on my name! Lots of funny stories - another post.

Nothing funny about these days though. My uncle/father was diagnosed with Alzheimer's disease a few years ago and now it is very evident that he will loose all of his memory soon. The main symptom of Alzheimer's is dementia, a horrible nightmare that robs people of memory. He is 84 years old and all of his siblings have the same problem. I believe it is part hereditary.

In a period of one year, he forgot how old he is. He doesn't know who our president is or what city we live in. Good thing for now, at least he still recognizes my aunt and me. But how long until he finally forgets who we are? Or how long he can dress himself, or go to the bathroom, or eat? These questions are horrifying. To make things worse, he just had hip surgery done. With all the extra medications, his mental state seemed to have worsened. Two weeks after the surgery, he didn't know that he had the surgery done and couldn't understand why he couldn't walk! He stayed in a rehabilitation/assisted living center for almost a month going through physical therapy after the operation.

After consulting with many people (including a social worker), me and my aunt and her two sons (my cousins) from a previous marriage, we all agreed that my uncle/father would be better off in an assisted living facility. My aunt and uncle live alone, and my two cousins are in the east coast. With me playing around with coral overseas, there is no one to take care of them. My aunt is 82 years old and cannot handle her husband anymore. My uncle/father needs 24 hour supervision and I convinced my aunt in the end to have him stay in an assisted living facility. In the beginning my aunt refused saying that she can take care of him, but in the end, it was obvious that my uncle's mental state and for the safety of himself, he could not come home.

This was the hardest decision to make for all of us. To make things really worse, my uncle thinks there is nothing wrong with him. He now thinks that we are all conspiring against him to kick him to the curb! You can imagine the pain my aunt is going through.

I ended up staying a few weeks longer in the US to find a place for my uncle/father. Glad to say that he is now in a facility 10 minutes from home. My aunt goes visits him everyday. Sometimes she brings Joyluck, my dog to see him. As I write this, I am really scared that by the time I return, my uncle/father will not recognize me. I have decided that this year will be my last in Indonesia staying long term. I will have to finish off all the training this year so my guys can handle things on their own here. But not to worry, as I will be returning to Indo regularly, just not staying long term. I have learned from the past that things tend to go wrong when I'm not around. For me in the near future, taking care of my elderly aunt/mother will be my priority. Family should be number one priority for anyone. 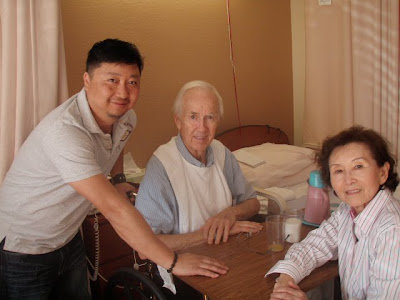 Here is my uncle/father and my aunt/mother at the rehab facility. I have been told that when people get old, they revert back to their childhood days. I guess this is true. My uncle/father sits in his wheelchair with a bib, like a child in a highchair to eat his food. 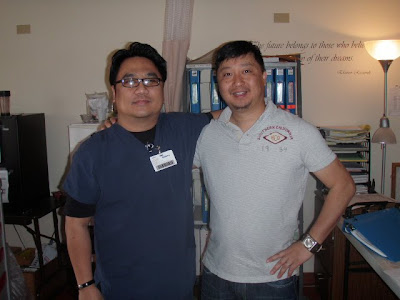 This is Dennis, the main nurse at the rehab assisted living facility. Dennis used to be one of my best customers back when I had a retail shop. He was always into rare and exotic corals and fish. One of only a few people that I know in the US to have a gem tang - a fish that can cost over $4000! If you are reading this Dennis, thanks for all your help and I owe you one! I know he especially took well care of my uncle during the stay. Dennis actually remembers my uncle coming to my shop with Joy on leash back in the days, just seems like yesterday though. 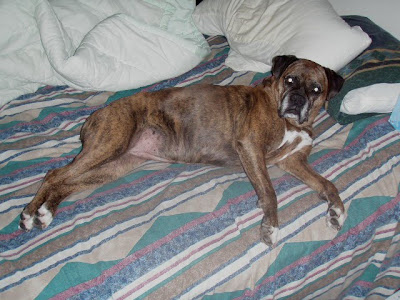 Funny thing about dogs, they are very smart and almost people like. Here is my boxer Joyluck. Joyluck is her formal name given by me (she was found and brings me joy and luck). Her short name is Joy and she is really a sweetheart. My aunt spoils her to death and loves her more than me. What is really sad is, when my uncle calls and leaves a message on the answering machine, Joy cries! Really amazing, and don't ever think that dogs don't have feelings.

Sorry for the depressing post, I know this is not the kind of stuff that you were expecting after a long period of not posting. Looking back there is a lesson to be learned. Spend more time with your parents before it is too late. If they are old already, spend some quality time and take care of them well, as they don't have much time left in this world. If they are still young, good, but, always remember that one day they too will be old and you must take care of them.

Coming up in a few days - I had a chance to do some crabbing while I was back at home - "Crabbing on the Pacifica Pier" is next. Then after that, corals corals corals!

I wish the best for you and your family.

Sorry to read this Eddy. All the best for you and your family.

Wishing you the best - will keep you & your family in our prayers. Pacifica pier crabbing? Gotta love it - spent my college days up in that neck of the woods. My uncle was the main chef at Nick's/Moonraker!

Sorry to hear about your uncle Eddie. I watched my grandmother go through this many years ago. It was very hard on the family.

I wish also the best for your uncle.

Man, i am sorry ... you know how much i was waiting your return, anyway, family first always !
Be strong and good return to business anytime soon !
Brgds
Marcello Salles

Sorry to hear about your uncle Eddie
my father was alcolatra and I never put a drop of alcohol in the mouth, only vodka in the reef "laughs"

I am sorry to hear about your uncle, I will send some prayers his way. Thanks for posting and keeping us up to date.