Hello everyone. Sorry for not posting lately, again have been very busy. So let's continue on to "fishing in Hong Kong".

As I was getting excited about catching what ever fish that was lurking down the platform, bright red sponge like things caught my eye that was growing on the sides of the plastic barrels that was holding up the platform.

I dropped my line and put my fishing pole down. I then laid down on my belly to get a closer look at the interesting life that was beaming at me from just under the surface. Wow! I saw sponges (I thought it was at first) in all sorts of colors. From red to white to orange to yellow, you name it, it was a beautiful sight. Well for the rest of the day, I lost interest in fishing (first time ever). Instead I spent the whole day documenting and taking pictures of the fabulous little ecosystems that was going on right below our feet. I even managed to take a few crude underwater videos with my camera.

The first obvious inverts that were clinging onto the pontoons were sea squirts and tunicates. I thought the rest of the other colorful things were sponges. It wasn't until I got back to my hotel and uploaded the pictures and video on my computer that I realized that most, or all of the "sponges" were indeed different species of tunicates and the likes. Wow, pretty cool! I felt like I discovered gold or something. 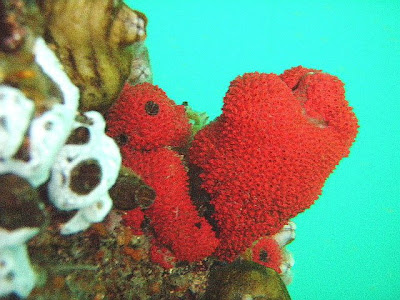 For sure I thought these were sponges at first. But ended up being tiny little tunicates. Even that white thing in the front is a tunicate species. 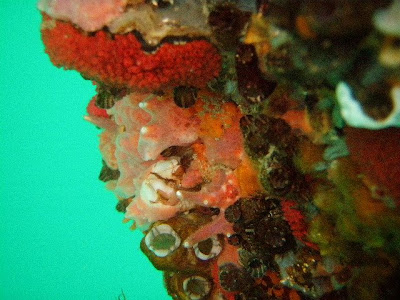 The regular large tubular white ring things on the bottom are easy to identify as a tunicate. But the little red things encrusting half of the oyster on the lower shell (towards the top) looks very much like a sponge. 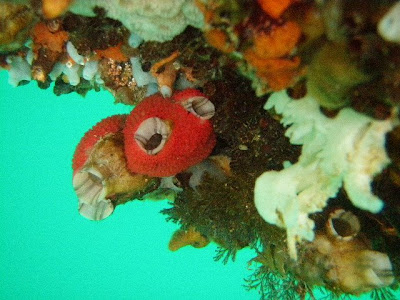 Wow! The little red buggers are even encrusting the larger cousins! 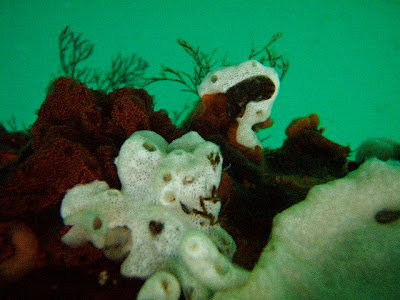 Brown and white tunicates. It is easy to see why I mistaken them for sponges. Heck I thought for a second it was a wartskin angler! 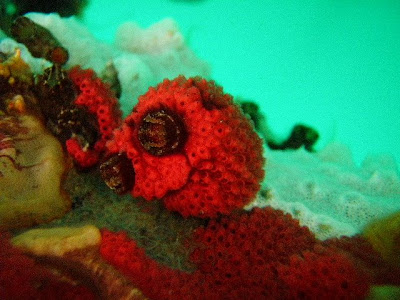 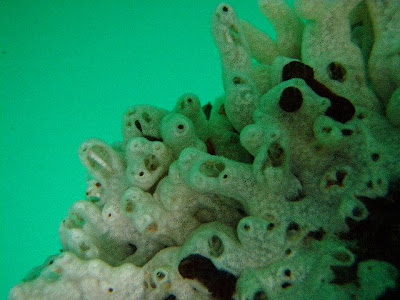 On a certain side of the pontoon, only these white guys dominated the precious living space! 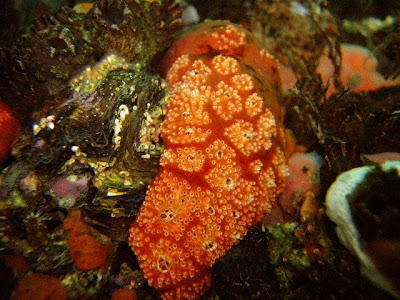 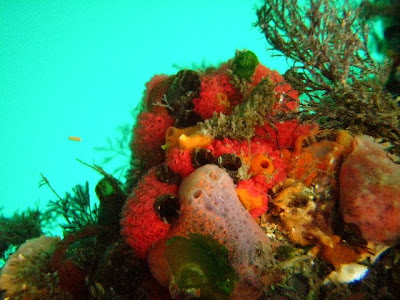 Look at this bundle of joy! You got red ones surrounding larger brown cousins. The you have little yellow ones and even a purple one in the front! 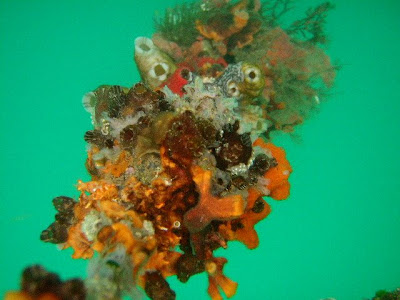 Check out all this growth on one of the mooring lines. Literally all kinds of sea life are growing on top of each other. Unlike the housing market in the US, there is a shortage of realestate here! 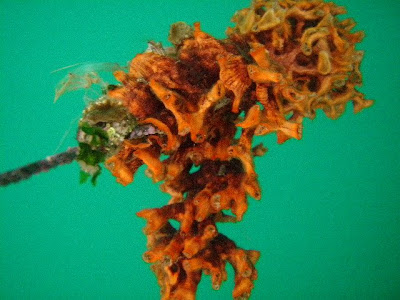 Check out this strange coral looking thing growing on a thin piece of rope that was just sitting in the water. 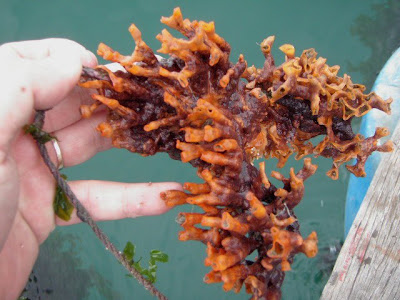 I pulled up the rope and here it is. From what I can tell, it wasn't a coral. But it is calcareous and perhaps a type of a coraline algae. 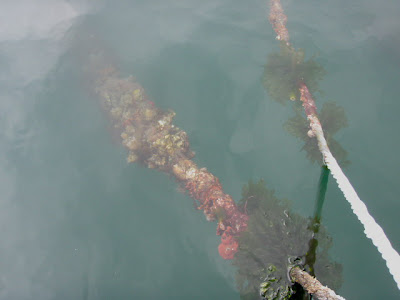 Here is shot of the mooring lines that keeps the platform in place. 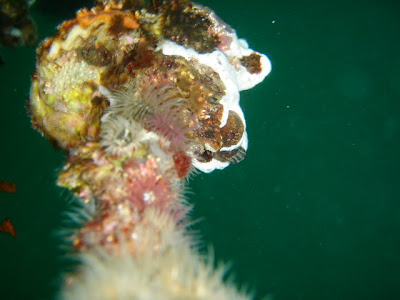 One of these mooring lines was just caked with feather duster type of worm creatures. Perhaps they could be glass anemones or aptaisa! 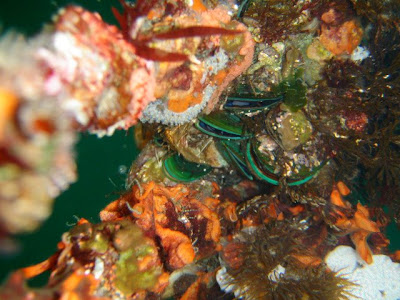 A few mussels managed to get a hold of on the crowded real estate! 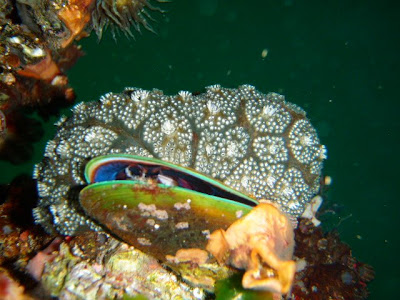 A green tunicate and a green mussel share the neighborhood! 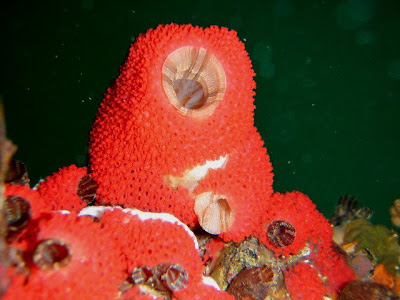 Just beautiful is all I can say! 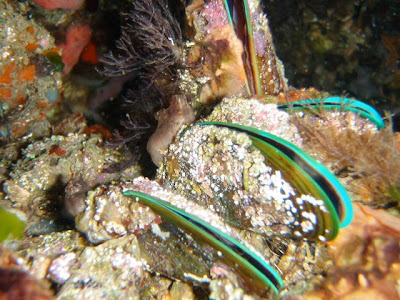 The mantels on these mussels were striking. They looked like they had on turquoise lipstick! 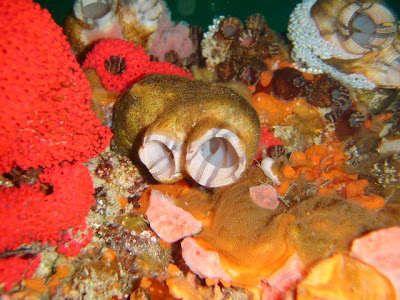 A menagerie of tunicate species! 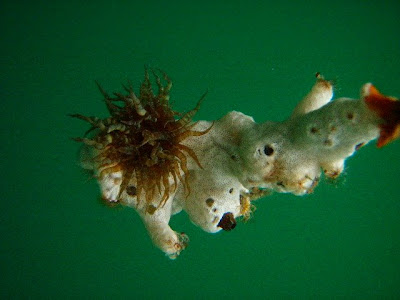 Ok for sure this is an aptaisa. Good to see that they do exist in the wild, and not just in our aquariums! 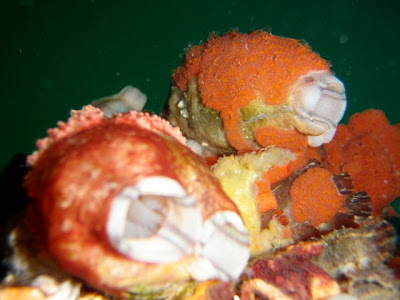 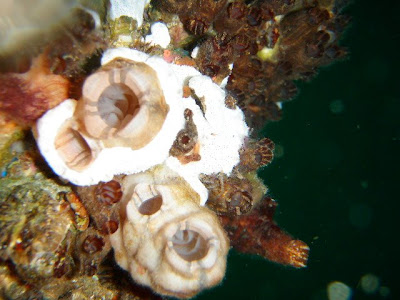 Check out the smaller brownish guys surrounding the bigger boys. And also, smaller white little dudes encrusting the big ones! 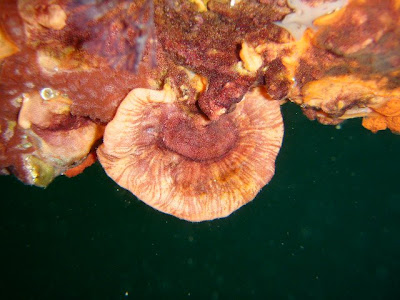 This appears to be a calcareous plating coraline algae of some sort - pretty cool! 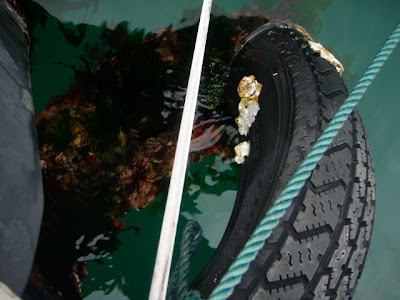 Of course I had to find out what was hiding out in the submerged part of this tire! 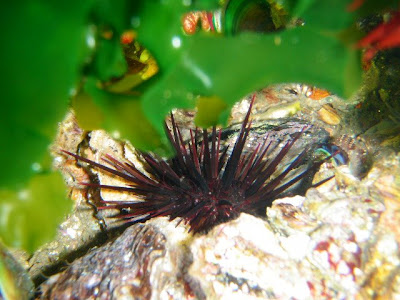 I stuck my camera in and started to move around looking for things. There were the typical tunicates and algea. But hiding out half way was this sea urchin. Even simple little things as this was exciting to discover. 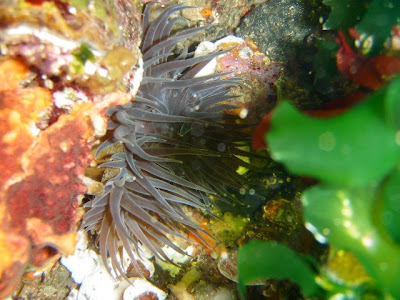 Some more searching and I spotted this anemone way in. I nearly got my head wet trying to get a close up photo. From the looks of it, my guess is that this is a condylactis. 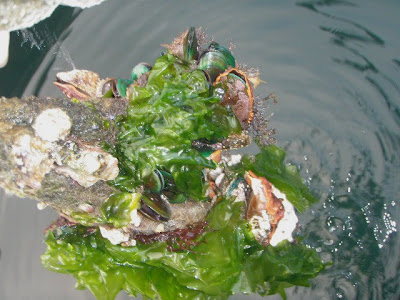 Another rope that had been submerged for quite a long time. I pulled it up to get a closer view. Just amazing at the amount of growth in such a small area. 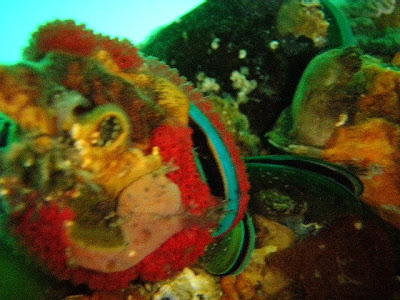 So this is my favorite shot. A bit blurry but gorgeous turquoise manteled mussel. The red encrusting tunicates really highlites this little bivalve!

Ok guys that is it for today. I have another set of tunicate pictures to show you on my next post. I also have three videos to share. I'm learning how to upload them now and hopefully will have the videos up when I do the next post.