Hello everyone. So I have a new camera that can take pictures underwater! After months of being scared to actually putting it in water, I took the big step and stuck the little gizmo into our holding tank. Below are some corals that I have prepared to ship when cites becomes available. Taking pictures underwater is a lot easier to do than from the top. No glares, but still the same problem - all the pictures come out looking too blue. Use the flash and it all becomes too pale. Although we only have old washed out 150 watt double ended halides (14k's), the pictures are coming out real blue. The corals don't look really natural under the halides (in pictures) but can't seem to capture the real look. Take a look and let me know what you think. 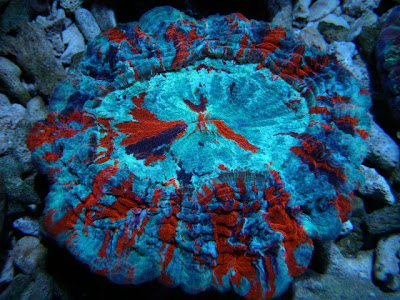 Beautiful Cynarina donut that happened to be just under the bulb. This will explain why this picture is so much bluer than others. 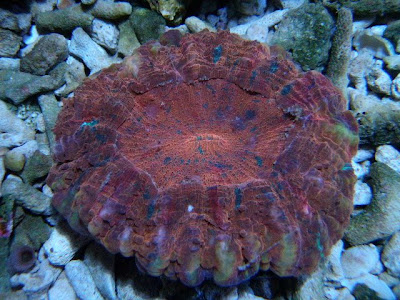 The donut actually has more colors than the picture shows. 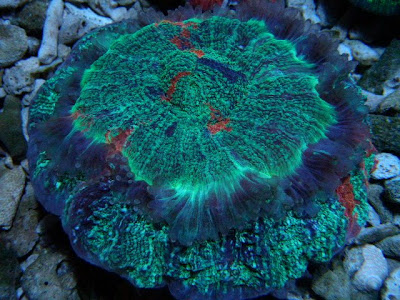 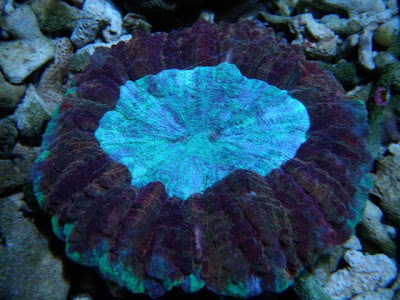 Ok guys, seriously this thing is insane! The colors are not metallic red or anything but has all sorts of colors. The real deal sitting in the tank is much better than this picture, but you get the idea. 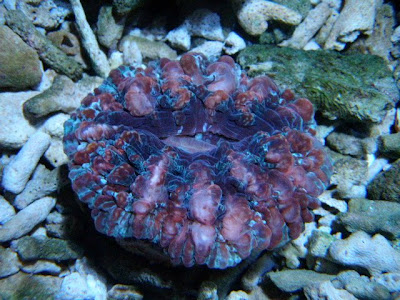 This cool little Cynarina lacrymalis is actually orange. The too much blue drowns out the orange -and orange cynarinas are not common! 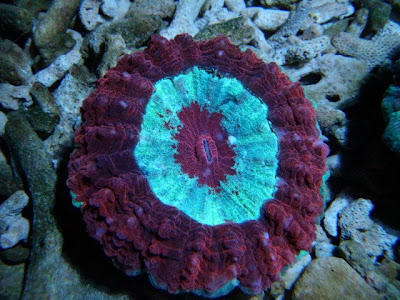 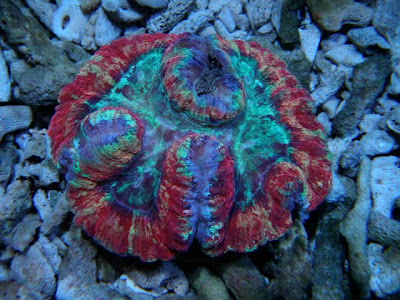 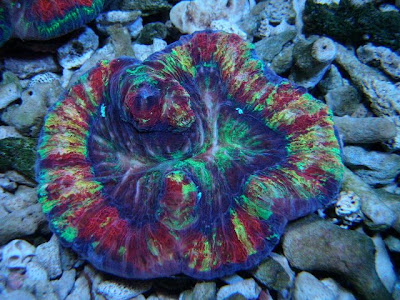 A young Bali brain starting to develop the folds that defines it differently from the regular trachyphyllias. If the brain coral has a flat base, rather than the cone shaped base, it is referred to as a Bali brain. If it has the cone shaped conical base, it is known as a trachyphyllia. Actually they are the same species, but because of different water conditions, the coral morphs differently in skeletal form. Interestingly, here in Indonesia, the trachyphyllias are known as Jakarta brains. And, the green Bali brains are known as Java brains! Only the red ones are referred to as Bali brains. 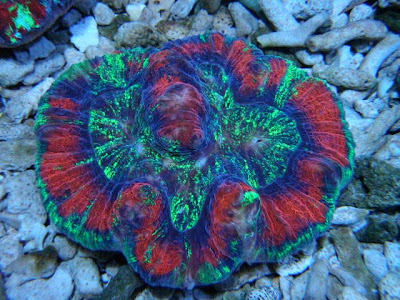 Another stunning Bali brain in making! 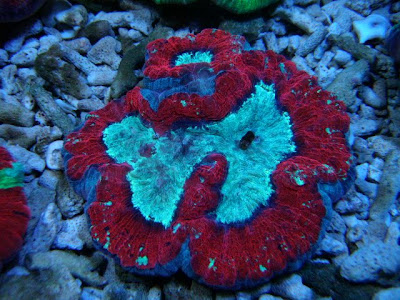 This metallic red Bali brain actually has a little daughter that has split off. You can see it at the top of the coral - very unique and unusual! 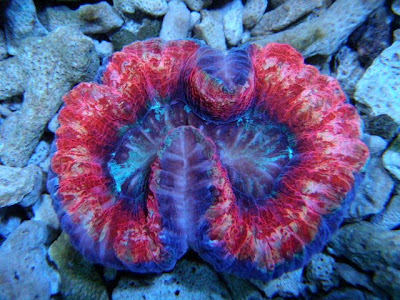 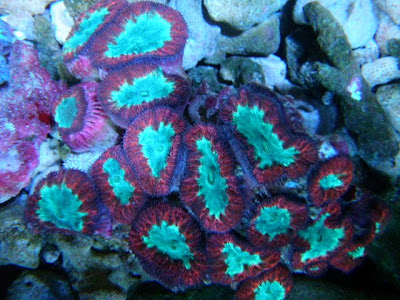 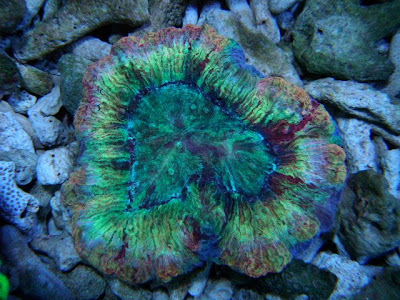 Small, but sporting rainbow edges, this young Bali brain will grow up to be a show piece! 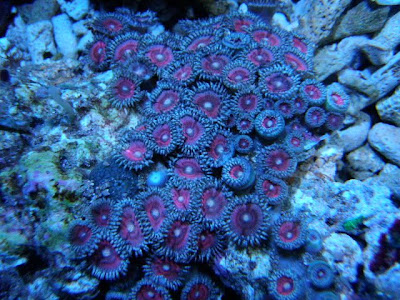 Some pink palys, looking too blue - got to figure out how to get the blue out! 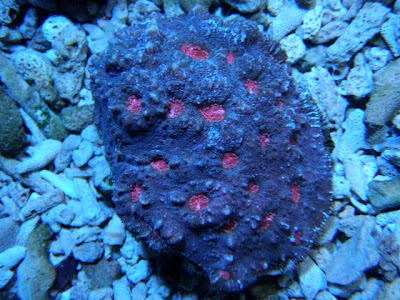 Strange chalice species looking like a favid. The base color is brown but the eyes are bright pink! 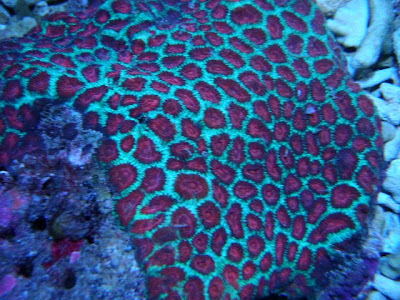 Metallic red and green favia are always nice. It is quite plentiful here in Indo. I remember desperately trying to find this morph in Tonga, but couldn't find any. 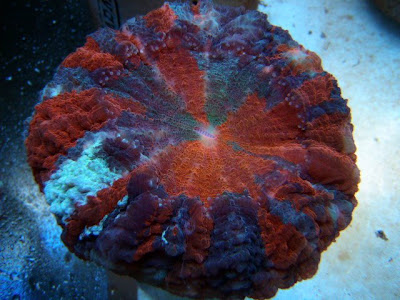 This picture was taken under our T'5s. The high output whites actually drown out the blues. But the picture is not bad, considering the actual donut looks pale under the T5 combo. Take it to the halide side, and wow the donut looks killer. So in this picture, we have the opposite problem, not enough blue's to hilight the true colors! 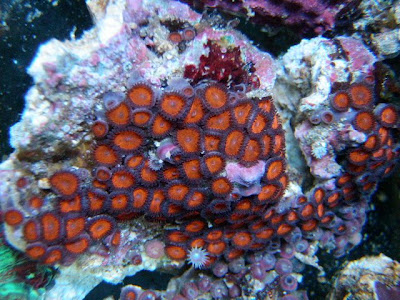 But these zoos look very close to the real thing - under T5's! 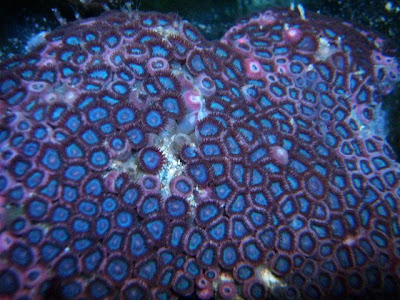 Some blue zoos under T5's as well. 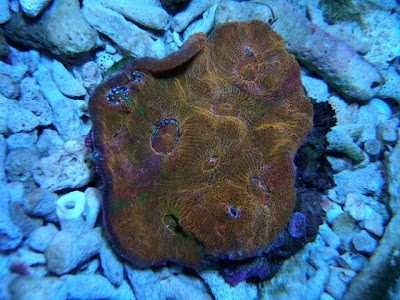 Cute little chalice under metal halides. The actual coral is much more orange than it appears.

Ok guys that is it for today. I think 10k metal halides would work out pretty good for taking underwater pictures. I will try to get hold of one and see what I come up with. If you have any tips, let me know. You can e-mail me at joylucktp2000@yahoo.com.

to get better colour out of yr camera use a manual white balance on yr camera setting. put a white plastic or slate in the tank next to the coral and set yr white balance then shoot.

it works great on a light grey slate as well...but white is easier to find..

Thanks Lyndon for the tip. I'll try it out.