Hello everyone. There is some breaking news coming out of Bali that I would like to share. One of the largest marine fish exporters in Indonesia is up for sale. The company I'm talking about is called Bali Blue and has been in business for 13 years. The pleasant and fish guru owner of BB is a French gentleman by the name of Bernard Bruguier. Bernard started out in Indonesia back in the days as a consultant for one of the founding pioneer companies in this business, called Banyu Biru of Jakarta. With expertise on fish care from Bernard, Handoko (owner of Banyu Biru) ended up making a branch in Bali to further business expansions in marine ornamental fish export. Bernard eventually took over the Bali operation and really made a huge positive impact on Indonesian ornamental fish trade.

Mr. Bruguier also ran a Vanuatu station for years. All the many cool Vanuatu fish that we have seen in the past years were coming out of Bernard's operation. There's even a beautiful new wrasse species that was named after him. As a matter of fact, one of my Filipino divers that I brought in to Tonga actually worked for Bernard's Vanuatu station for years. Bernard has sold his company since and has been focusing on his Bali operation.

I had the priviledge of recently meeting Bernard and checked out his operation. Actually I met him at a restaurant in Bali last year and he invited me to his facility, but I finally got the chance last week to go see him. I have heard of him before many times during my adventures overseas in the past. And I have to say that I heard nothing but good things about the gentleman. One of the reasons why I went to see him was to ask "why was he getting out of the business?" And the answer was very simple, just tired and want to move on to other adventures.

One of his passion is collecting (and recently dealing) ancient old Indonesian carvings and statues. A very interesting hobby as I found out. Some of these wooden works of art are 200-300 years old! And there are buyers (both museums and private collectors) that are eagerly looking to pay big money for these things. It is kind of like a treasure hunt, looking all over the place for that one special piece. Some are in the hands of private wealthy Indonesians, while others may be just in plain site that nobody knows the value. It is kind of like corals in the reefs. It has value to us, but to people that are not in the trade, it is just there and of no importance. I can understand Bernard's passion for these ancient art. After hearing some interesting stories about these wooden works of art , I was ready to put my Indiana Jones hat and start cracking my whip! Something about looking for lost treasure brings out the kids in all of us.

The facility is beautiful and below are some pictures. Bali Blue is for sale at $2.8 million US. It is not bad considering you are acquiring all assets of the company, including some prime Bali realestate. Add to this the fact that BB makes verifiable $50,000 US a month in profits, makes me drool, man I can't even count that high! If I had the money, I would be telling you about my new adventure. For more details, send me an e-mail at joylucktp2000@yahoo.com. 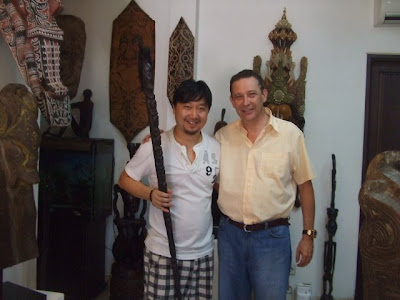 Here is a picture of me and Bernard in his office. Note the antique wooden carvings in the background. 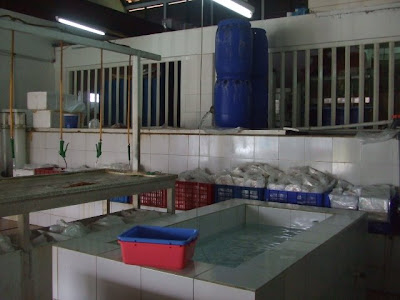 Here is the packing station. The tub of water is for packing and an airstone keeps it aerated at all times! 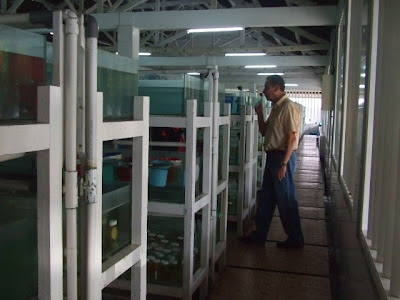 Here is Bernard again checking out his fish. 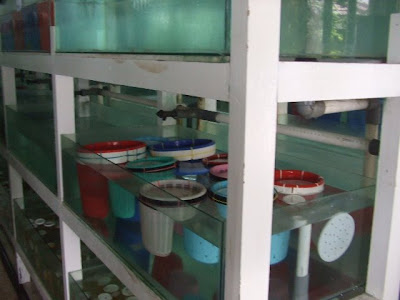 Everywhere you see are these floating cages to house the fish. 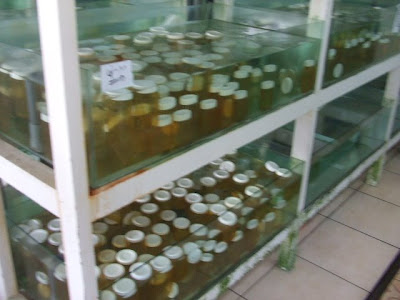 Sorry for the blurred picture but even small fish are kept in containers. This is a common method to hold the fish before shipout. This keeps the fish from getting injured and keeps them from becoming too agressive. 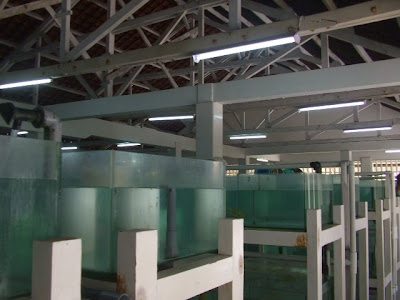 As you can see, the facility is very modern and kept very clean. Believe me I've seen what the "normal holding systems" look like at other exporter's facilities. 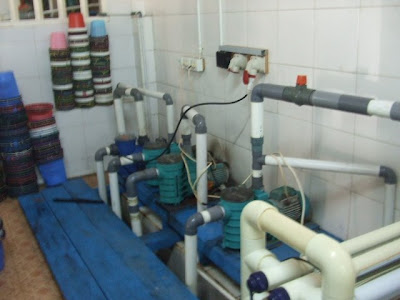 Typical of holding systems here in Indo, the sumps are below ground. Note the UV sterilizer to the right. Not too many exporters have such things to keep fish extra healthy! 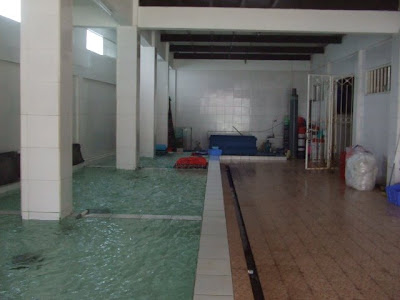 This is the acclimation area. New fish are selected and quarantined here before entering the main system. 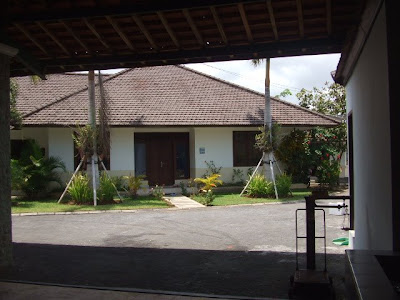 Here is a picture of Bernard's office from the main warehouse. 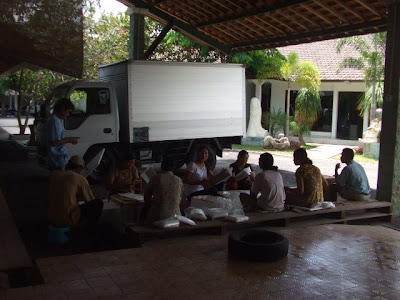 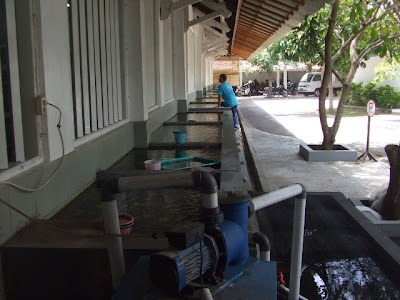 Along the warehouse outside is this system that houses inverts, including anemones. 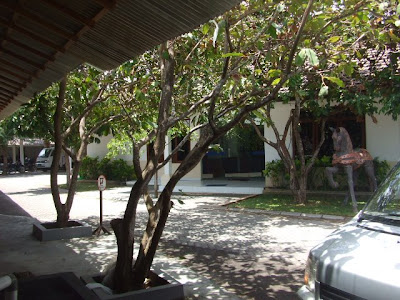 So there is quite bit of land in the premises. 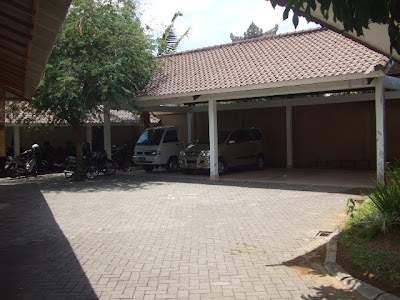 The place even has a place to park the vehicles in shade, a big advantage because of the blistering sun! 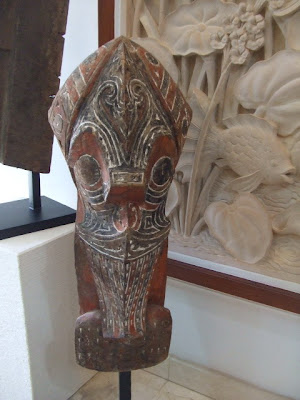 Ok so here are some pictures of Bernard's collection of his collectibles! Each one has a story behind it and believe it or not, it is very interesting. 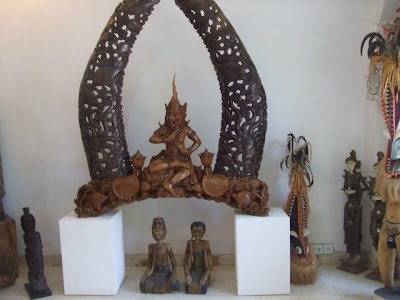 This statue belongs to a friend in Florida! 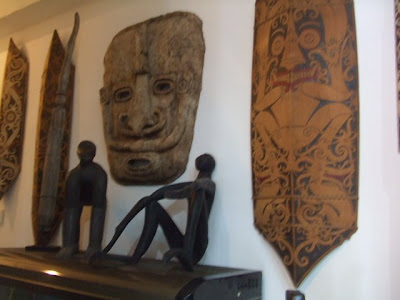 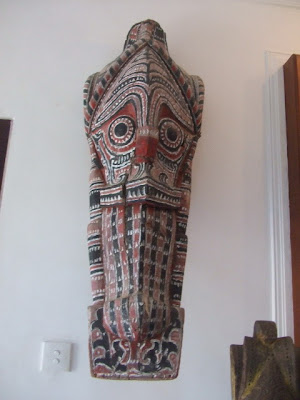 A piece like this would be found at the pillars near the roof of a super old house or a temple. 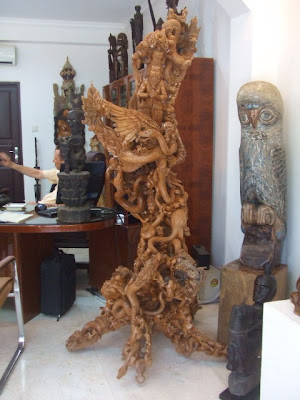 I don't think this crazy wooden carving is that old, but certainly is beautiful! 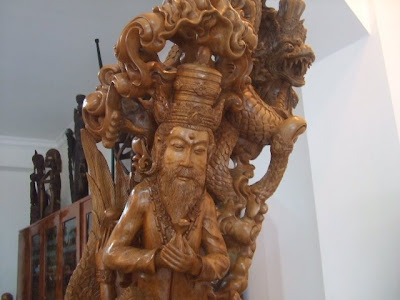 Here is a close up shot. Check out the details, Balinese are excellent craftsmen!

Ok guys that is it for today. We will go back to posting coral pictures in a few days.

But seriously, Bernard runs a top operation and someone lucky will end up taking over Bali Blue!