Hello everyone. So it has been a hectic week. From Bali to Banyuwangi and back. Only a day later, off to Sulawessi for few days and back to Bali. Hours later, off again to Banyuwangi. Just returned yesterday very tired.

So let's continue on to the previous trip to East Java. 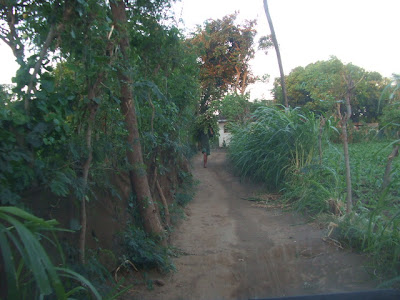 It was getting late in the afternoon and we decided to go check out the supplier right next to the beach once more. We got a call that he was getting in new corals. This is the small road that takes us to his place. 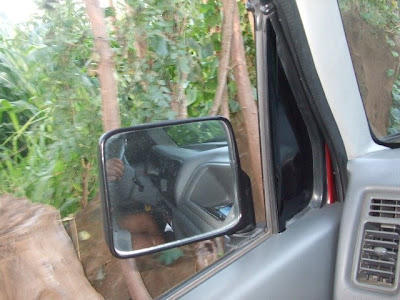 Even with our small rental mini mobile, we had to bring in the side view mirrors to fit through the tiny dirt road. Otherwise it would hit the trees and bushes on both sides. 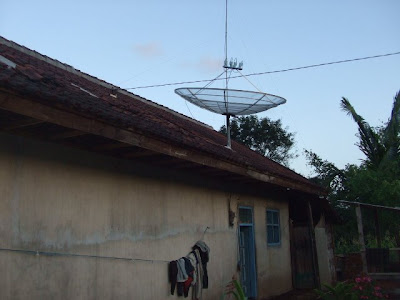 Basically this farm (farm is what they call a warehouse in Indo) is the owner's house, just converted into a coral holding facility. I wonder if the satellite dish works. 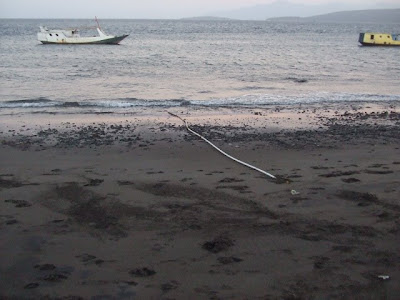 After picking through the corals, I took a walk along the beach behind the facility. Check out the pipe coming out of the sand and into the water. A pump is used to pump fresh seawater into the holding concrete tanks inside. 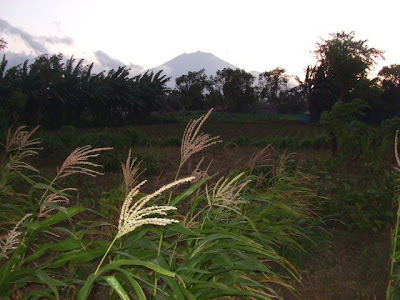 I took this nice picture of a mountain in the horizon, as we were heading back to the main road from the beach facility. On both sides of the road were fields of farmland. 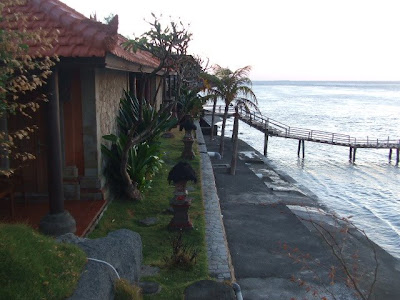 So we ended up checking into the same hotel as before. After a quick meal at the hotel restaurant, we took a nap for a couple of hours. Getting up at 4 am and sleeping for few hours is tiring already. On top of that, bending over and picking corals from thousands takes a beating on my back. Good thing I brought a big bottle of Aleve to kill the pain. 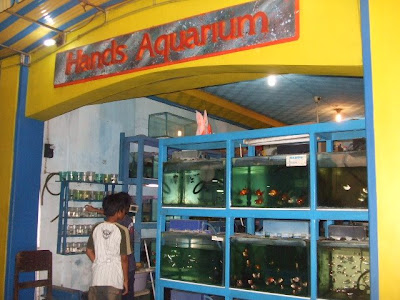 It was around 7 pm by the time we woke up. We decided to hit the town of Banyuwangi! We wanted to go check out the street market for fruits and vegetables. Right next to the market, there was this local fish store. They mostly had goldfish and common freshwater tropical fish though. 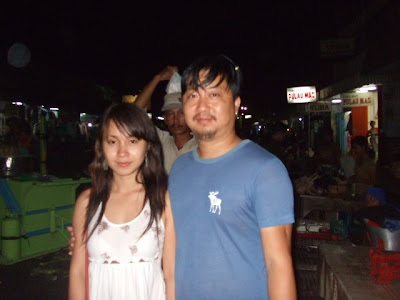 Here is a picture of me and my wife in front of the market.

We will talk more about the market tomorrow. Meanwhile, I'd like to talk about some corals from this trip that I thought were exceptional. 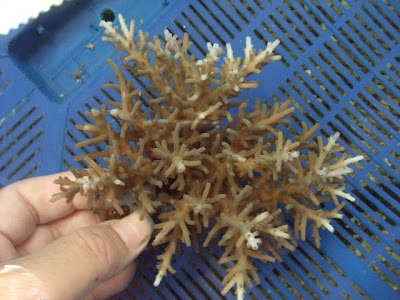 So out of hundreds of acros, this one really stood out! It was the first one I grabbed. This thin bottlebrush acropora really looks like an echinata. The color is greenish, but I can see it going blue under halides. The white tips are not damaged, but rather new growths. An awesome piece that has the potential of becoming one of a kind! 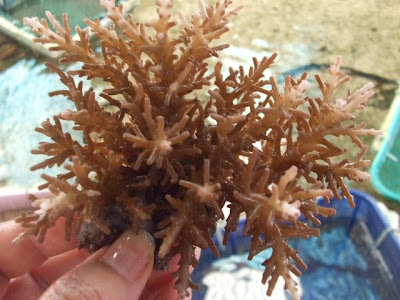 Here it is again but out of the water. Check out how brown it looks, but as soon as you put in water, there is color. Can you imagine what it can look like under some 20K's after a couple of months? 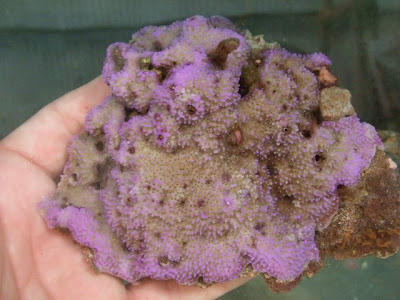 Check out this beauty! This encrusting montipora has green polyps in the center. On the edges, the polyps are orange. The base is yellow-green-purple! This one has the making of a rainbow monti! 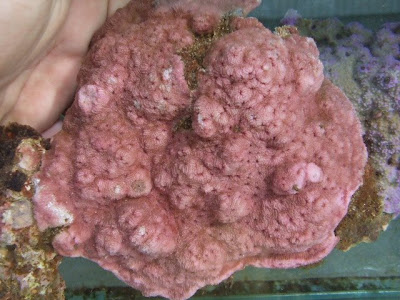 WOW!!!, so this killer lps was mixed in with the montis! From a distance, it looks like a montipora. But a closer look reveals that it is a leptoseris! The color is insane! It has a unique color of its own - pink-purple -crazy! 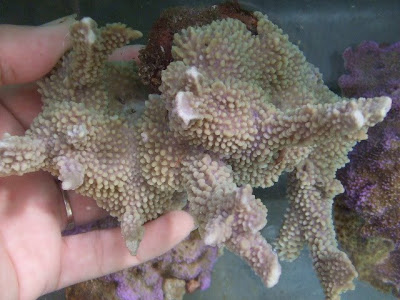 Montipora capitata! This coral looked ten times better when I picked it out. It stressed during shipping and lost some color. Still, with a little TLC, it should come back nicely! This montipora species seems to be not so common, as this is the first time I've seen a wild one. 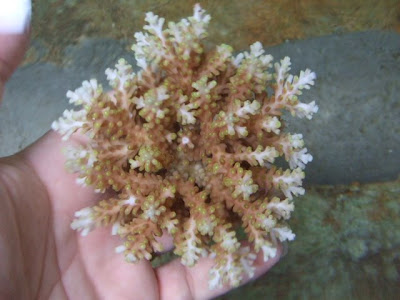 Check out this not so common Acropora microclados! The base color is peach with green polyps. The tips are blue! Awesome! 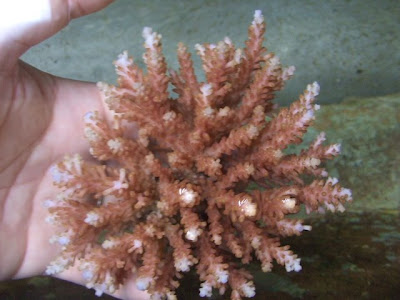 Here is another microclados. This one happens to be red with purple tips. I can see it going crazy under halides! 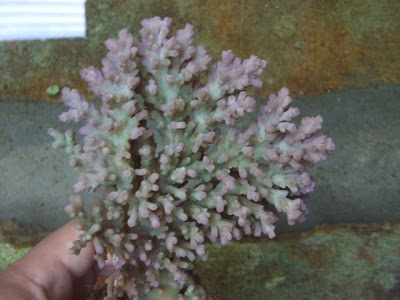 Always my favorite, the Acropora carduus! It seems like there is always one waiting for me at the suppliers. But keep in mind that one out of hundreds is what we are dealing with! So it is pretty safe to say that it is not common. 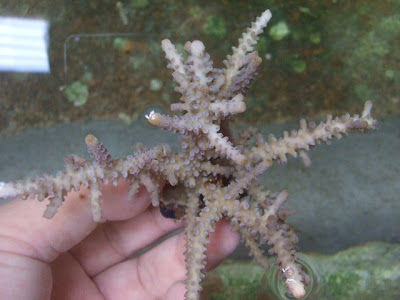 One thing I really enjoy about what I do is that I never know what corals I'm going to run into. It seems like I'm seeing new species of acropora all the time. The picture does not do any justice on this killer thin branched acro. This is an Acropora parilis. It is the first time I'm seeing this piece. The colors are really nice too. The base color is yellow- light green with blue polyps! 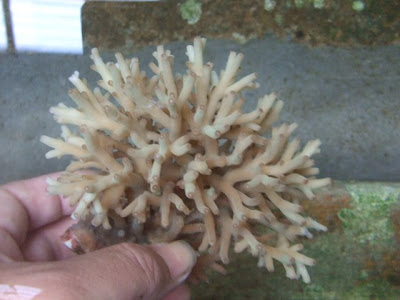 Here is another not so common acropora. If you guessed Acropora turaki, you are going to Disneyland!

Ok folks, that is it for today. I will be heading off to Jakarta tomorrow night, but I will do another post before I leave.

I think I finally found a true Bali soly! We can discuss this very special coral along with some other killer sps's!