Hello everyone. Let's interrupt our road trip to Monterey for a second to talk about the very rare Clarion Angel (Holacanthus clarionensis). This angelfish is only endemic to the Clarion Island which lies 350 miles south west of Cabo San Lucas. For more info on this island you can check out this link.

This is one of the holy grail of angelfishes. Until recently, it hasn't been available for many years. Because of his influence in Mexico, Steve Robinson has managed to get permits from the Mexican government to go catch and export this fish. Of course the number of fish is limited and there is a strict quota to be followed. For those of you that don't know Steve Robinson, he is the pioneer of net catching in the Phillipines. Back about 20 years ago, he went to PI (Phillipines) and started to train the local fishermen to switch from cyanide to net catching for the aquarium fish. He also helped to develop the aquarium fish trade in Mexico. After many years of hard work, it finally paid off. An earlier shipment (not as successful) shipment of clarion angels came in about three months ago. But this time around, everything got improved. I was lucky enough to be here to receive the shipment of 200 clarions!

The fish are being housed at my friend/customer's place in Hayward California. His name is Robert Rodriguez and his company name is Aquatic Specialties and Pets. He is the biggest Northern California wholesaler of marine and freshwater fish. I will do a post on Robert's operation a little later. To give you an idea of how high the demand is on this rare fish, Steve and Robert has customers from all over the world coming down to hand select the fish! Chances are, there will be no more available for the rest of the year and don't know about next year. If any dealers are interested, please send me an e-mail at "joylucktp2000@yahoo.com". 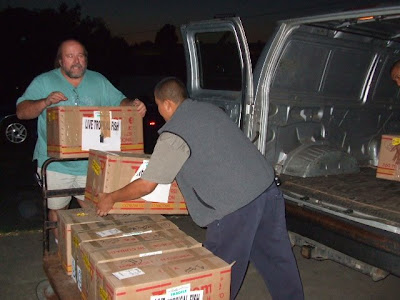 And here he is, the famous Steve Robinson helping to unload the precious cargo that he diligently worked so hard for, for many years! 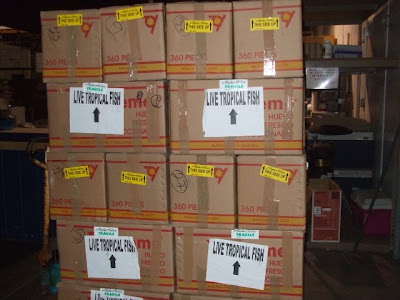 Strange enough, the boxes were not styrofoam boxes. The fish were packed in these cardboard boxes that was used to transport eggs! I guess the flight from Mexico to SF is not that far, so perhaps no need the standard shipping boxes. 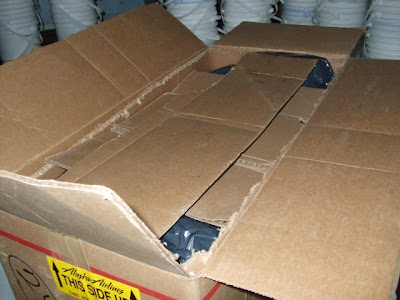 Upon opening up the box, I noticed the inside was reinforced with extra cardboard to give it strength. Note the strip of cardboard on top to protect the bags of fish from the razor blade that is used to open up the boxes, pretty clever! 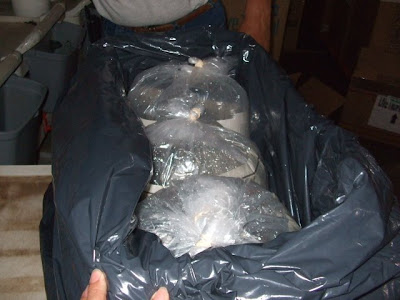 Most of the med to large fish came in two or three in a box. Even a four inch fish were bagged in these large sized bags. 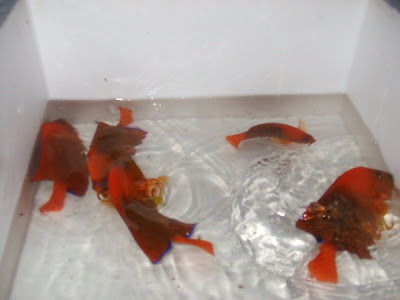 Some medium sized fish swimming around before being transferred to the main system. 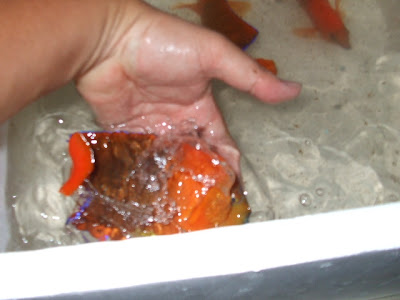 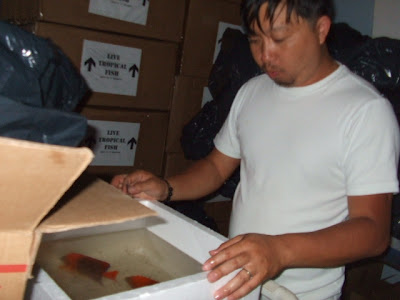 Here I am admiring the beauties! This was the first time I ever saw a clarion in person! Totally amazing! 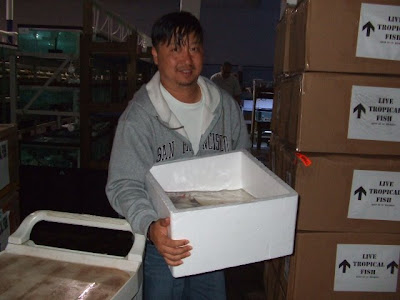 Check out my hair, I got a haircut and now I'm even more handsome! But my wife doesn't agree! 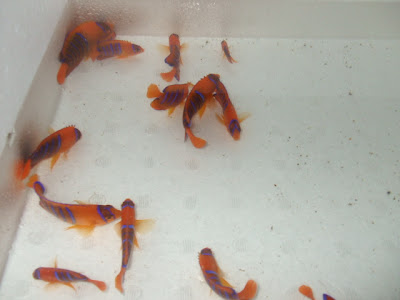 One third of the fish were tiny to small in size. To give you an idea, one box had 19 clarions! Some of the fish were too small to be shipped and sure enough, lost some the next day. Juveniles are vulnerable because they need to eat all the time and these have had nothing to eat for at least a week. They will be fatten up a little and in good shape before ship out. 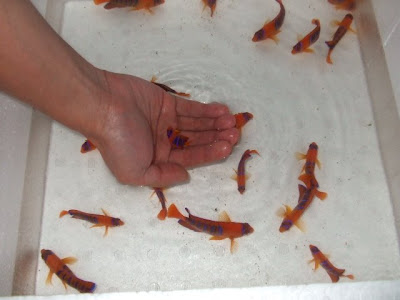 Ok this was like, the smallest clarion ever! It was about an inch long! Surprisingly, it made to the morning and is doing good. 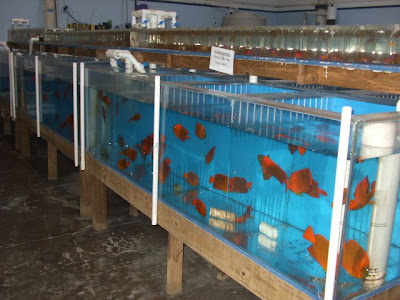 Some of the larger clarions are housed in these large tanks. The adults seem to get along with each other, unlike the small and the juveniles. 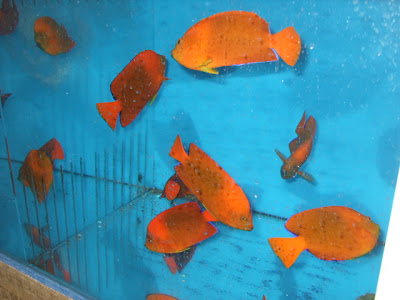 The bright orange color on the adult clarions are just too beautiful! 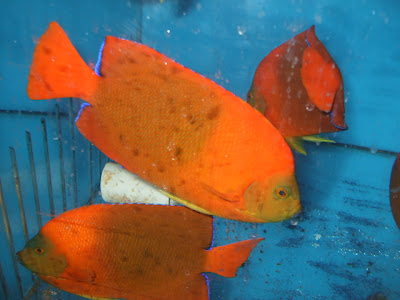 This large one can pass for a giant Garibaldi fish! It is that orange! 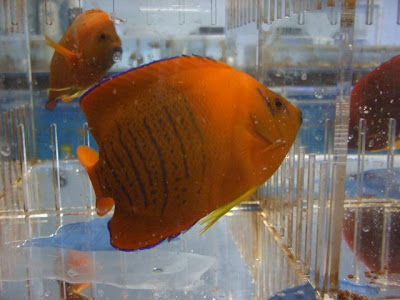 A juvenile in a cubicle. Note the juvenile stripes on the body that will soon fade away. 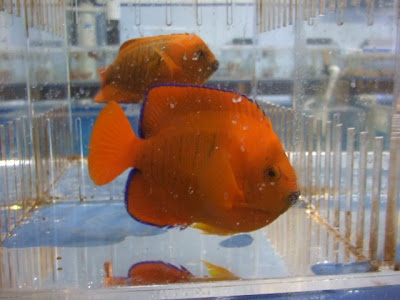 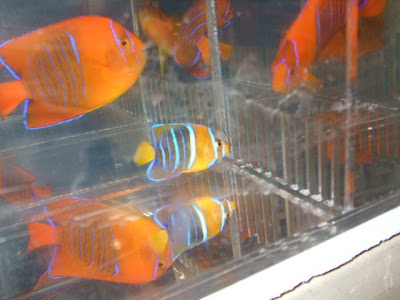 A tiny juvenile passer angel got mixed up with the clarions. These passers and other Sea of Cortez and Caribbean fish are highly in demand in Asia. 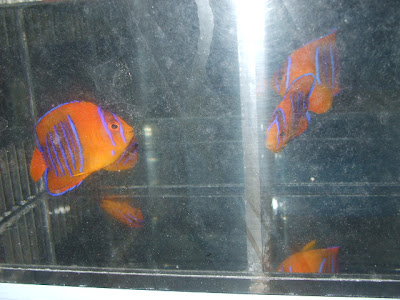 These juveniles are about 2.5 to 3 inches long, perfect for aquariums. 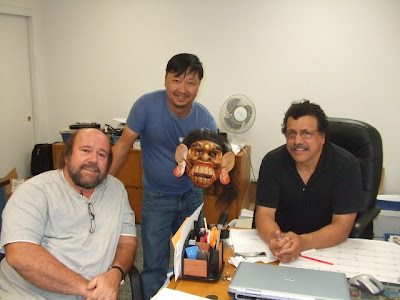 And here we are. Steve is on the left and Robert is on the right. Of course that's me in the middle with my "friend" from Bali!!

This was a rare event with so many clarions coming in. I will be staying one more week in the US to help market the fish.

Your friend is scary lol ;-)

It creeps everyone out at my friend's place. I want to find the "queen" leyak when I get back to Bali!

is there anyway i can find Steve? coz i wanna get some clarion angels.

Send me an e-mail at joylucktp2000@yahoo.com